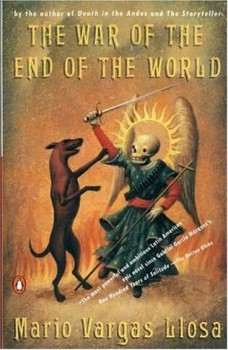 Peruvian author Mario Vargas Llosa, one of the finest writers in the world — perhaps, indeed, the finest writer — was awarded the 2010 Nobel Prize for Literature by the Royal Swedish Academy yesterday.

Vargas Llosa wrote two of the best novels I’ve ever read: Time of the Hero, based on his experiences at a Peruvian military academy — which caused such an uproar that a thousand copies were publicly burned by military authorities — and The War of the End of the World, which he’s called his finest book. This historical novel of End-of-the-19th-Century Brazil reads like epic fantasy, chronicling the apocalyptic fate of the small town of Canudos, in the grip of a visionary prophet and home to the country’s outcasts — prostitutes, bandits, and beggars — and a place where money, taxation, and marriage do not exist. Until the Brazilian government deems it must be destroyed at any cost.

In total he’s written over 30 novels and plays, including The Green House, Conversation in the Cathedral, Aunt Julia and the Scriptwriter, and In Praise of the Stepmother.

Vargas Llosa ran for President of Peru in 1990, but lost to Alberto Fujimori, who was later convicted of bribery, embezzlement, and human rights violations and sentenced to 25 years in prison. In 1976 Vargas Llosa famously punched his former friend Gabriel García Márquez (author of One Hundred Years of Solitude and a 1982 Nobel Prize winner himself) in Mexico City, and the two have reportedly not spoken in decades.