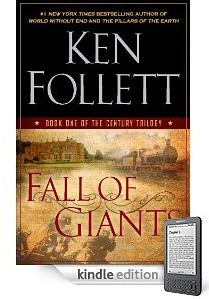 The New York Times is reporting that two recent bestsellers — Fall of Giants by Ken Follett, and Don’t Blink by James Patterson and Howard Roughan — are priced higher in their e-book versions than in print by Amazon.com.

As you can imagine, this has ignited something of a firestorm in Amazon’s Customer Reviews section, resulting in both novels taking a critical drubbing.

Refuse to pay this much for an ebook

REVIEW THE ACTUAL NOVEL, NOT THE KINDLE PRICE!!!!

To be fair to Amazon, it had no control over the Kindle price. Amazon lost that battle earlier this year, in a settlement with publishers that allowed them to set their own prices on e-books (prior to that, most Kindle books were $9.99). For both novels Amazon has highlighted this with the words “This price was set by the publisher,” right below the Kindle price.

For their part, publishers argued that Amazon was undercharging for e-books, especially new releases, and was attempting to monopolize the market.

Whatever the case, I can’t imagine buyers will put up with publisher’s arguments that e-books are worth more than physical books for very long (especially for a 1,008-page monster like Fall of Giants. I mean, c’mon.)

Imbalances like this are probably to be expected in the early days of a burgeoning market like electronic books, but that doesn’t make them easy to put up with. I don’t know exactly how this will shake out, but I expect the pricing on the second novel in Follet’s Century Trilogy to be a lot better coordinated.

This is interesting. As more and more people purchase e-books, fewer will buy hard copy. The money to pay the editors, artists, publicists, and designers has to come from somewhere. I wonder where it will all settle. We’re on TECTONIC GROUND, O’Neill.

Well… e-Books will have to be edited, publicized, designed, and, uh, artisted too. I don’t think those are the jobs that are the most threatened.

Book binders now… that may be a different story.