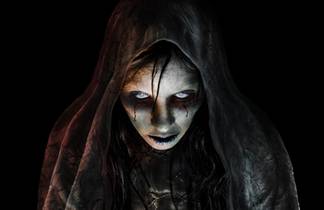 It’s the first of October and that means the countdown has started.

For the next thirty days there will a lineup of great stuff on TV, a schedule full of movie festivals and new theater releases, a litany of themed events and a virtual plethora of options for combining adult beverages and questionable behavior.

In short, it’s thirty days until my favorite date on the calendar: Halloween.

For the next month I will average approximately four hours of sleep per night in a manic attempt to juggle my intrusive day job with all the after-dark activities available only this time of year. Soon I will begin to resemble the pale and sallow creatures of my Midnight Movies and bug-eyed demons of the local haunted attraction, but it matters not. I will sleep on November the first.

You don’t have to be utterly obsessed with All Hallow’s Eve to enjoy October. With an internet connection and a little tenacity, you can expend as much or a little cash as you wish and still have a ripping good time.

Here are my top three suggestions for ways to enjoy the only time of year when adults can act like juvenile delinquents in public, and no one cares. 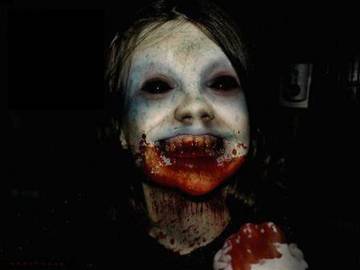 Expensive: I once saved for two years to throw an end-all Halloween party called “The Heart of Darkness Masquerade” for 150 people. I rented an awesome location, hired a DJ, chose the food — including a black cake that “bled” red filling when cut — and employed a magician and a tarot-card-reader for entertainment. Everyone came in costume and consumed a lot of the aforementioned adult beverages and in the end, the magician and the tarot reader weren’t actually necessary since there was plenty of entertainment. The upside is that people are still talking about it. The downside is that some people are still not talking to each other.

Cheap: On the Saturday before Halloween, every local establishment holds some manner of revelry which encourages patrons to come in costume. When else will you have a chance to dress like a pirate and go out in public without attracting the attention of law enforcement?

You’ve probably got enough accoutrements in the back of your closet to pull some manner of theme together without a lot of effort. One year several of my friends put wet oatmeal on their faces and went out in their normal clothes as zombies. The point is, don’t miss this chance to act out. 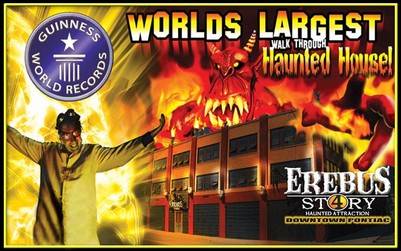 Expensive: Every year the Travel Channel documents their list of Scariest Halloween Attractions in America. Can you say “road trip?”

If you’re lucky, you live in the vicinity of one of these over-the-top, not-for-kids locations; and if not, you’re still lucky because now you can make a weekend of it.

Private purveyors of houses of horror such as these get away with a lot more than theme parks or local forest preserve hay rides so be prepared to be seriously and realistically grossed out.

Two of my absolute favorites are the four-story Erebus in Pontiac, MI and The House of Shock in New Orleans where a guy in the group ahead of me actually had a mild grabber half way through and got carried out an emergency exit by paramedics.

Now that’s what I call an endorsement. 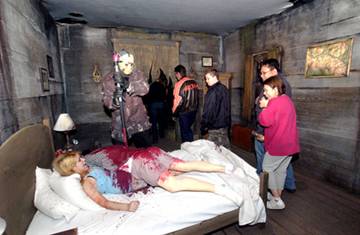 Cheap: We call it our annual “H3” event: Haunted House Hopping and we started the tradition back in college.

Get a group of friends and kick off the evening at a pizza place where you can lay out a plan to hit as many local, Jaycees or Knights of Columbus “haunted houses” as you can fit into one evening.

Though neighborhood attractions can be quite elaborate, most are cheesy fun where you’ll be the oldest people in line getting leaped at volunteers wearing costumes like the ones mentioned in the previous “cheap” section.

Don’t be mean. Play along and shriek in all the expected places, then buy a cup of apple cider from kid manning the stand at the exit.

It’s the best evening you’ll ever have for under twenty dollars. 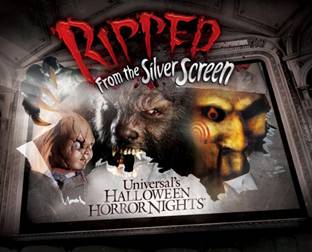 Expensive: Universal Studios gave birth to the original movie monsters so it goes without saying that their Halloween Horror Nights, in both California and Florida is the high-water mark for all themed events.

Imagine ten sound-stage-sized, walk-through environments, each with a different story line and all designed by horror-movie special effects teams.

I’ve had the pleasure of attending twice and the last time I couldn’t talk above a whisper for two days due to the amount of screaming the event wrenched out of me.

One of the friends I went with flat out refused to go through the last two attractions, saying she just couldn’t take anymore; that it was tantamount to paying someone to give you a stroke. For that reason alone, you should start saving for next year now.

Cheap (relatively): Six Flags theme parks do a nice job with their Fright Fest event. All the parks participate and all do a good job balancing attractions for a span of age groups.

At my local Chicagoland location, the entire park is transformed by extensive decorations and employees sport elaborate costumes. There are four impressive “haunted houses” in addition to a walk-through environment.

“Scare-free zones” are designated for the younger participants and everything is bracketed by the ability to ride the roller coasters by night.

A couple of years back I accidentally got into the line where the coaster cars were running backwards; combined with the speed and the darkness the disorientation was a bit much and I threw up on myself a little.

There are more Halloween happenings than I could possibly mention here but at the very minimum you could take in a new horror movie release nearly every weekend of the month, or just stay home and rent a few classics.

Last weekend I did both by seeing Let Me In, the American remake of the classic yet disturbing Swedish vampire film Let the Right One In and I’m thrilled to report it lived up to every expectation.

I also pulled a few black and white thrillers from my own collection and invited some friends over for a horror movie marathon.

As one of my crew eloquently puts it, “Every October you end up exhausted and looking like hell from staying up all night, having the wits scared out of you, screaming your lungs out and getting flung through the dark until you throw up. Does that really make sense to you?”

Yes, it certainly does.

Here in the underground bunker of Goth Chick News we’re celebrating Halloween for the entire month. So post a comment or drop a line to sue@blackgate.com and tell us about your favorite fall happenings. Have a picture of yourself in costume? Then send it, pretty please.

[…] the moments between now and then calls for a lot of activity, some of which I described to you last week; the rest of my time I spend buried in my favorite Halloween-time books. Are there really books […]