In my ongoing Art Evolution series, I explained my plan to collect ten of the greatest fantasy role-playing artists of all time for a shared project. They were to illustrate a single character in their most recognizable style. So far, the list has included Jeff Laubenstein, Eric Vedder, and Jeff Dee, with this week adding again to that prestigious list. 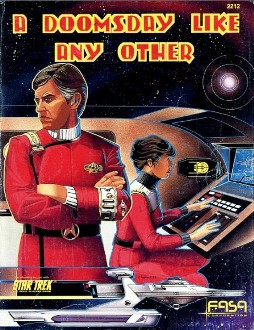 Three down, and I now had a “1st Edition D&D Lyssa”, but I’d only scratched the surface of my goal and all the artists I’d collected so far weren’t cold calls. These were people I’d already worked with, friends and partners, and the list that remained loomed much larger than this current success. I kept asking myself, ‘do you want this for you, or do you want it for something greater?’

I chewed on that as I read through an old Dragon magazine one afternoon in late August [a pastime I strongly suggest doing once a month to anyone still role-playing]. While reading, I stumbled on a beautiful advertisement for the Traveller RPG.

I recognized the art as something I’d loved in my teens, but had no idea who drew it. Going to my bookshelves I pulled down a copy of FASA’s House Davion supplement for Battletech and managed to put a name to a style… David Deitrick.

I remembered him from a hundred different pictures that had shaped my role-playing life in the late eighties. Everything about his work screamed military, and that style lent so well to the science-fiction bent of the companies he helped characterize. 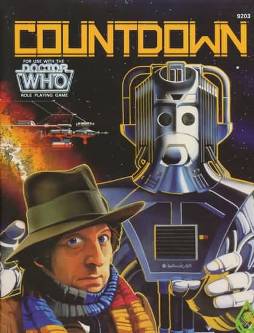 He certainly helped define the first Star Trek RPG, created awesome supplement art for the Dr. Who RPG, and absolutely and unequivocally galvanized the military and mercenary hierarchy of Battletech.

I was amazed I didn’t know Dietrick’s name, although he was as popular as any artist in the industry during the later eighties. I could only assume it had everything to do with TSR and nothing to do with talent.

It seemed that the more I looked at my list, the more it lent itself to TSR artists, and in the case of Dietrick his fortunes rose and fell in an industry of transient and failing companies not represented by the powerhouse from Lake Geneva.

Since Jeff Laubenstein was the onetime Art Director at FASA I emailed him to talk a bit about Deitrick. A few kind words were exchanged, and I went online to see about finding the artist who I believed absolutely needed to do Lyssa.

Now, I have a distinct advantage over Robert Asprin and his Thieves’ World gathering, that being it’s 2009 and not 1977. Mr. Asprin had a phone, that’s it, so I give him tremendous props for what he accomplished. Today, the internet seems to make anything possible in record time and with a modicum of Google-fu I found David’s website. 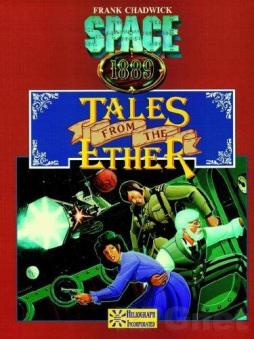 I quickly found David to be both wonderful and grumpy, the business side of the RP industry jading him the past two decades but that hadn’t diminished his love of the art itself.

He’s a military man, a teacher, a bit of a conspiracy theorist, and we got along famously. I’d bought a copy of GDW’s Space: 1889 at GenCon the month before I started the project, and the more I studied his cover art on the book, the more I wanted him to do Lyssa in that genre.

David wasn’t so sure about the way Lyssa should be portrayed, but he still jumped at the chance to add his tremendous talent to the project. In the end, he provided me with two incredible versions of Lyssa, and although I thought I would have to choose only one, this current format for publication allows for you all to see both.

I know… the wonders of the infinite space of the internet, right?

David Deitrick is a former military man. He found his calling in spaceship design, uniform creation, and a submariner’s candor of space-borne life. 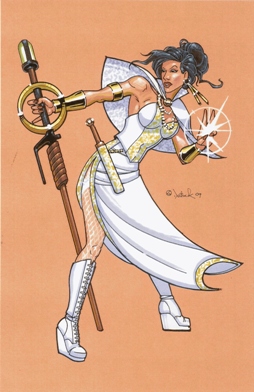 Deitrick also introduced readers to another form of art, the color marker. His works still resonate in our minds with hard exterior lines and exacting detail. His colors were muted yet powerful and the block and angle shading of his work brings geometric measure to both man and machine.Deitrick defined the military aspect of FASA’s Battletech system as well as bringing Star Trek the RPG to life with the eighties style of the nostalgic “Wrath of Khan” time-period.

Still, perhaps his greatest contribution fell in his creation of Frank Chadwick’s Space 1889. This era lent itself perfectly to Deitrick’s style, and it also brought us into one of the first contexts of “steampunk,” a genre that covers the shelves today.

With 1889, Deitrick rose to new heights and his corsets, pith helmets, and Webley revolvers won the hearts and minds of gamers ready to ply the space lanes from Victorian England to the canals of Mars. 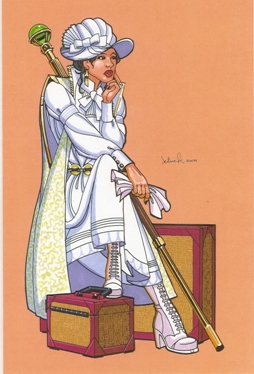 Deitrick enriches us with a steamer trunk sentimentality and we take a journey of hard-won experience with him. His ship designs are so exacting that an engineer couldn’t dispute them, and yet they maintain a military romance that is bound in all of his work.

David creates his dominion over a more civilized form of art. His crisp technique seems to hold the barbarians of fantasy at bay with a kind of frontier cavalry of art. We see his characters brandishing sabers and bedecked with epaulet and polished brass buttons as they grace the pages of RPGs at the turning of eighties.

Current Status: David is teaching college art in Tennessee although he still works as a freelance sculptor and gaming artist. He is always looking for new gaming ideas and frontiers to depict and can be reached for commissions here. You can also check out his gallery and have a chat with him at his fan page on Facebook here

Both so different, and yet they’re absolutely connected, and not just by color scheme. The lines, the shadowing…I wish I knew more about art so that I could actually articulate what I mean!

Deitrick is all about lines, and he does them so well. As an interesting side note, David has actually done a self portrait of himself in the Star Trek cover above, and his wife is the officer behind him.

He used friends and family members as models for quite a few paintings. It’s a lot of fun to pick up a game supplement and see yourself with a blaster pistol on the cover!

Black Gate on David Deitrick | Songs From The Wood

Hey Conrad, I know that cover!

[…] most recognizable style. So far, the list has included Jeff Laubenstein, Eric Vedder, Jeff Dee, and David Deitrick with this week adding the first female name to our list of esteemed […]

Last Week to Board the Airship of Fools! | Asura Star

[…] It’s the last week to back Scott Taylor’s and David R. Deitrick’s The Airship of Fools: The Gun Kingdoms Volume II. The rewards are sweet! Don’t miss the […]