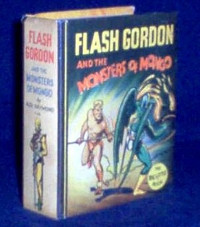 “Monsters of Mongo” was the second installment of Alex Raymond’s FLASH GORDON Sunday comic strip serial for King Features Syndicate. Originally printed between April 15 and November 18, 1934, “Monsters of Mongo” picked up the storyline where the first installment, “Flash Gordon on the Planet Mongo” left off with an unconscious Flash being rescued from Princess Aura by the Lion Men.

Alex Raymond really begins to hit his stride in portraying the diversity of life on Mongo in this second installment. Prince Thun and Dale Arden are prisoners of Ming’s soldiers. Thun’s father, King Jugrid has retaliated by destroying the kingdom of the Shark Men. Ming’s soldiers have, in turn, annihilated much of the Lion Men’s fleet.

Jugrid orders Aura’s execution. Flash fights to save her life and the two are rescued by Prince Barin. It is in Barin’s kingdom that Flash is at last reunited with Dr. Zarkov. Flash and Zarkov soon form an alliance with Barin and Aura as the unlikely quartet determine to overthrow Emperor Ming.

Of course, Aura being Ming’s daughter quickly betrays our heroes. The sequence culminates in one of the strip’s iconic images as Barin and Flash power the Electric Mole to burrow their way underground and crash through the floor of Ming’s palace just before he can wed Dale.

The influence of Edgar Rice Burroughs’ AT THE EARTH’S CORE is heavily felt in the Electric Mole sequence, but it is Burroughs’ JOHN CARTER stories that have the greater influence in Raymond’s sophisticated approach in revealing Mongo’s green god, Tao as a hoax.

Flash and Barin meet up with Thun in Ming’s gladiator pit. The trio escapes and hide in a secret panel at the base of the huge statue of Tao where they learn how to bring the statue to life and let the god of Mongo speak to his people. 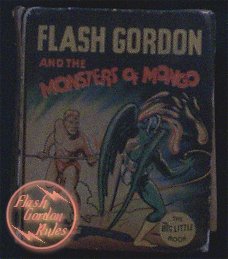 Flash, as the voice of Tao, forbids Ming to marry Dale. Ming quickly reveals that Flash is operating the false god, but the High Priest continues to believe in spite of proof that his religion is a lie. Ming executes the High Priest for placing his faith in Tao above his loyalty to the Emperor. This was heady stuff for a thirties comic strip and outdoes Burroughs’ Barsoomian religious satire at its most stinging.

Raymond really takes off at this point as he has the rocket ship bearing Flash, Dale, Zarkov, Thun, and Barin to a prison city crash into a fog-shrouded mountain. Our heroes find themselves in a land overrun with savage tribes of boomerang-wielding pygmies and packs of armor-pated wolves.

Raymond develops the delightful interplay between the duplicitous Aura with her infatuation with Flash and the boisterous Vultan, king of the Hawk Men whose city in the clouds is immediately recognizable to anyone who has seen THE EMPIRE STRIKES BACK.

It must be acknowledged that along with the non-stop action and stunning artwork, the sex and violence formula largely derived from Sax Rohmer’s FU MANCHU stories is what truly propels FLASH GORDON. 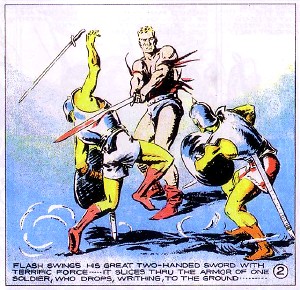 Raymond’s sprawling scenes of decadent harems with lounging, barely-dressed exotic-skinned beauties are intercut with intense torture scenes in damp dungeons where Aura attempts to break Flash’s loyalty to Dale and win his heart through pain.

Raymond’s mastery of the female form has advanced from the comparatively crude drawings in the first installment to reaching unparalleled heights. Quite simply, the art of comic illustrations begins and ends with Alex Raymond and his unique ability to portray a world of fantastic perils and delights.

The fact that Mongo’s royal family is apparently Asian only underlines the fascination the much-maligned East had on Western pop culture in the pre-Cold War era. Much can be made of the undeniable dual attraction and repulsion for foreign cultures and other races at the root of much of early twentieth century pulp fiction.

Raymond continued to alternate the sex with cliffhangers over and over again over the next several weeks. Amazingly, it never grows stale.

Dale agrees to marry Vultan if he will spare Flash’s life. Flash, laboring in the fuel pits that keep the Hawkmen’s city airborne, learns of Dale’s decision and begins to give up hope. The city is imperiled and it is up to Zarkov’s brilliance to save the day.

Vultan becomes an ally in his gratitude and frees them all as the installment ends on a hopeful note with the trio of Earthlings and Prince Barin gaining an invaluable ally in the ongoing fight against Ming the Merciless. 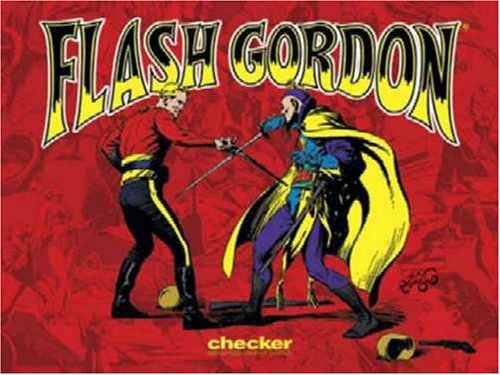 As 1934 was drawing to a close, Alex Raymond had found his pace and readers everywhere were dedicated to following the continuing adventures of FLASH GORDON every Sunday. For those who have never sampled these original strips, it is a chance to see Raymond’s brilliant synthesis of pulp influences in creating the archetype for sci-fi and action/adventure stories to come. Highly recommended.