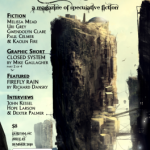 The unfortunately named Bull Spec (I’m assuming this is a reference to Bull Durham tobacco and/or the Kevin Costner movie that takes place in Durham, N.C. where the magazine is based and its intent to feature local writers of “speculative fiction”) has published its second issue as part of an ambitious plan in an age when print is on the decline to put out two more in 2010 and qualify as a quarterly magazine.  Editor Samuel Montgomery-Blinn responded to my complaint that the website looks like something from the 1990s that it was in fact built using software tools of that era because, for now, he’s more concerned about the look and quality of the print publication (also available as a pdf download).

In that, he’s succeeded in producing a full-size, glossy, thick stock, some color magazine that has a look and feel comparable to Interzone, featuring interviews, a serial graphic story, reviews. poetry and short fiction. While the magazine looks fresh and contemporary, like the website the short fiction is from another era, i.e., a pulp magazine of the 1940s. All five stories hinge on the main character coming to some realization about his/her plight in life due to some science fictional contrivance or fantastical occurrence. In every case, you see the O’Henry twist  long before it is supposed to surprise you.

The best of these is “The Other Lila” by Gwendolyn Clare, a consideration of the legal and emotional ramifications of personhood should a teleporter malfunction create duplicate beings.  Who is the original and who is the copy?  And who gets to own what, including cohabitation rights with a girlfriend?  At first I wondered whether, given the denouement (which I’m not going to spoil here), it made sense for one of the Lilas to tell her side in a first person narrative.  But the more I thought about it, the more I think this was by design, adding a nice layer of complex ambiguity (unfortunately lacking in its peers) to a plotline about ambiguities of identity.

Speaking of making sense, Melissa Mead undercuts her otherwise clever world building of “Hirasol” in having a character continually reference such anachronisms as 1960s sitcoms and  a Kentucky Derby winner from the 1970s.  I wonder if many readers in 2010 will get the references, let alone whether humans in some far future of interstellar travel will be making them.

A snake goddess hitches a ride in Uri Grey’s “The Sad Story of the Naga,” leading to some amusing repartee between the human driver and a fantastical creature adrift in a world dominated by monotheistic beliefs.

Good thing I was driving alone, because her huge tail took up the back seat and its tip lay on my shoulder.  I can’t say I wasn’t flattered.

I’m normally a sucker for this kind of stuff, but the theological underpinning unravels in a way I found to be a letdown.  I was looking for a better punch line, not a parable about the superiority of Christianity over polytheism.  Still, there is some funny and thought provoking stuff here, as there is in the magazine as a whole.