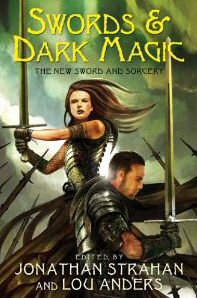 The masterminds at SF Signal have asked the contributors and editors of Swords & Dark Magic: The New Sword & Sorcery — including some of the biggest names in fantasy — to define Sword and Sorcery, as part of their Mind Meld series.

Here’s what Moorcock said, in part:

I didn’t get this the first time around; I wrote a whole book on supernatural adventure fiction called Wizardry and Wild Romance which still probably didn’t answer the question. Basically I see it as a good old-fashioned sword and sandal or cloak and dagger drama with strong supernatural elements. Captain Blood meets Cthulhu. It seems, in fact, to have replaced the old historical melodrama in most of its aspects. Or returned to them if you look at those origins in the late Peninsula Romances which were the big news circa 1450.

“Sword and Sorcery” once reduced to an embarassing cliche by the “PC Media” IMO has the potential to revitalize itself. It just needs to be faithful to it’s “pulp” roots.

I’d suggest a look at the TPB’s of Dark Horse’s very, VERY good re-hash on “Conan” and IMO I’m surprised there’s no article here (that I’ve seen) on them.

They did a very good job, not just with the art but with the duality of both doing justice to the stories and retaining the “Pulp” feel of it. They did this such as by splitting them into multi-issue chapters or even whole books and when quoting Howard directly always going into the “Pulp Typewriter Narrative”. Since they are in print now and at the bookstore/coffeshops like B&N and Borders, I strongly suggest checking them out.

My fav. adaptations are “Tower of the Elephant” and “Rogues in the House” and “The God in the Bowl”. They even turned “Cimmeria” into a stand alone issue that was a promotional issue earlier and really expanded “Black Colossus”. Also, they did a brilliant job “Filling in” since REH’s stories are by no means a “Complete” Conan. They couldn’t use Marvel’s “Living Tarim” series but IMO they swapped it masterfully with “Hyperborea” for a long adventure to solidify a young Conan’s mindset.

The thing is, REH lived these adventures, in his head at least as he was typing them, sometimes shouting as he hammered out the lines. Neil Gaiman noticed this also, calling him crazy but a crazy he envied.

Among the many “Pulp” writers, most now seen as “Hacks” there were some that were far more intellectual (Lovecraft) and far better with the language and story (Clark Ashton Smith) but Howard kept in motion by sheer enthusiasm and his works endure for that.

Sword and Sorcery comes from, in my opinion, not from it being just another form of “Entertainment” but from being an “Experience”. If it’s written right the writer is enthusiastic and carries you with him on his trip to some quasi medieval other-world or some dying fictional Mars with sky-ships and humanoid alien princesses. And not just that genre, you care about the lonely hard boiled detective who’s trying to solve his case even when everything seems to be going wrong and that blonde that hired him has been abducted by crazed cult. You care about the desperate but brave soldiers fighting old world wars, even if your modern intellect considers all such movements fakes for the rich elite. You share the Masked Crusader’s lust for “Brutal Justice” even though he’d make the “Punisher” look mild by today’s standards and be considered twice as crazy. You thrill with the explorer going to “Darkest Africa” fighting horrible cannibals that attack in wave after wave of filed teeth terror, even though it’s really non-PC today…

Good Pulp fiction is an immersive experience, rivaling what all the “Cyberpunk” stuff raved about “Virtual Reality”. It does the best at transporting you to another world by stimulating the one computer capable of such a feat today, the mind.

Nice MindMeld from SF Signal, too.

Great comment, GreenGestalt. I particularly like the comparison to Virtual Reality. As ‘thrilling’ as these ‘tales’ are, they move us with more than just swinging swords and blasting laser-guns; they tap into a part of ourselves.

I feel really ambigous about this book. Some of the stories are really quite good. But the majority of them don’t really seem to fit the genre this book is aiming for at all. 5 S&S stories out of 17 is definitely not enough. Either the authors had not properly been informed about what kind of anthology this would be, or the editors had a very open definition that treats Sword & Sorcery as interchangeble with generic heroic fantasy.
The two things I am missing the most in this book are swords (action) and dark magic (monstrous horrors and villainous sorcerers). Most of the stories lack both.

Rather disappointing as a whole.