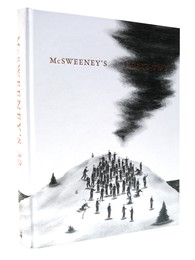 McSweeney’s is a quirky quarterly  that  breaks conventional publishing boundaries with each issue devoted to a unique theme, both in terms of editorial content and physical packaging. For McSweeney’s 32, its last issue of 2009, ten contributors were tasked with writing tales specifically set somewhere in the world that take place fifteen years hence in 2024. According to the editors:

…we wanted to hear about where we’d be — to see what the world could look like when things had shifted just a bit , as it seems like they’re starting to, heading into the second decade of the third millennium…and a semitangible future at last seeming imminent.

For the most part, this is a future defined by natural disaster, frequently involving water. Serendipitously, I read this during a record snowfall in which I was homebound for four days before my driveway could be cleared out. While the state declared an emergency disaster, and unlike a lot of Virginians who lost power as well, it didn’t much matter to me that I couldn’t go anywhere since I was comfortable with reading material, heat, food and Internet access. Not Katrina, by any means, but “normal life” did shut down for a short time. In some of these stories, normal becomes not a return following a disaster, but is defined by the disaster.

There was a time when futurist stories were about how humanity overcame its limitations, both in terms of earthbound existence and its evolutionary defects (remember that what was supposed to be so “innovative” about the original Star Trek was that it depicted various races working together in harmony, forgetting that women of any race were stuck in miniskirts and mostly served as subserviant love interest for the captain). It would seem that from the perspective of the oughts of the 21st century, the future does not look particularly bright.

Science fiction of the 1950s and 1960s frequently envisioned a post nuclear-holocaust future; once the Cold War ended, it shifted  to eco-bio-technological disasters. Whatever the cause of the destruction, these scenarios shared the view of a future wasteland resulting from humankind’s arrogant  tinkering with natural forces. For the most part, the McSweeney’s folks folk see disaster as the result of our continuing ineptitude to respond to the forces of nature. In other words, the future isn’t all that different than it is today.

In Wells Tower’s “Raw Water,” a sexually mismatched couple (she’s the randy one, while he couldn’t care less) move to  a distressed property leased sight unseen because the ecological damage is well-suited to the wife’s paintings and photographs inspired by “science’s unintended consequences”:

The Anasazi was America’s first foray into the new global  fashion for do-it-yourself oceans–huge ponds of seawater, piped or channeled into desert depressions as an antidote to sea-level rise…A land fever caught hold. The minor city of Port Miracle burgeoned somewhat on the sea’s western shore. On the east coast sat Triton Estates, a gated sanctuary for golfers and owners of small planes. But before the yacht club had sold its last mortgage, the young sea began to misbehave…The desalination plant’s reverse-osmosis filter, designed to last five years, started blowing out after six months on the job. The land boom on the Ansanzi fell apart when water got so expensive that it was cheaper to flush the commode with half-and-half.

Moreover, the water has turned red with the growing presence of primitive bacteria that thrive in high salt environments; the water has been deemed safe, even if aesthetically offensive. Yet after a few dips  the husband experiences an uncharacteristic huge increase in sexual appetite that extends beyond his wife for satisfaction; meanwhile, one of the founding  residents  who has remained at Triton Estates in hopes of eventually regaining a return on his investment is exhibiting signs of dementia.

Water also figures heavily in Jim Shephard’s parable of a dysfunctional marriage, “The Netherlands Lives With Water.” The narrator is a government scientist who measures the effects of climate change, particularly snowmelt, that threatens the country’s famed system of dikes that rely not on a little boy’s figure, but highly sophisticated technology. All this scientific ingenuity, however, is expected to fail with overwhelming shifts in water flows. With major flooding imminent, the narrator has the means to move his family out of danger, but is oddly reluctant. Even in the face of hard data that disaster looms, the narrator acts as if it will somehow all work out. A nice meditation not only of all-too common inadequacy of bureaucracies to act proactively, but also the human mystery of irrational behavior.

A Katrina-like water disaster has already occurred in Chris Bachelder’s “Eight Wonder,”a bit of hyperbole once applied to the first sports dome of its kind in which survivors have taken refuge (and, unlike Katrina, without government interference/ineptitude; also unlike Katrina, the flooding waters aren’t receding). In recounting how a social order among the survivors evolves, and how it might move towards long-term sustenance, this tale is more optimistic, even while recognizing the human predilection to screw things up.

In “Oblast” by J. Erin Sweeney, water is less the source of disaster than the means of conveying it. Returning captive Caspian seals to their natural habitat, even despite the prospect they may not survive, provides cover for a secret mission that involves secretly transporting the children of a war criminal somewhere they might not be harmed in retribution for the crimes of their father. Here, too, the odds of long term survival might be better, but there appear to be no better choices.

Less grim, if still pessimistic, is “Sky City” by Sesshu Foster, who somehow manages to pull off a funny dialogue that improbably involves a Los Angeles pirate radio station broadcast of a zeppelin piloted towards a perhaps mythical Sky City populated by commuters who seemingly disappear from the freeways, though a few do seem to drop back in from points unknown upon occasion.

Also funny is “There is No Time in Waterloo,’ by Sheila Heti in collaboration with Margaux Williamson. “Everyone in Waterloo was an amateur physicist, and they endlessly bugged the real physicists as the physicists sat in cafés talking to each other” (147). A little bit of knowledge can be a dangerous thing, particularly when it is announced that all the problems in physics have been solved. Still, it would appear that not everything that we know means we can predict what will become known. Something to think about.

The next story, appropriately, is “The Material Proof of the Failure of Everything” by Heid Julavits. This is a kind of secret agent noir set in Hungary as Kafka might imagine it following radical reversal in political ideology. Here, the new boss is the same as the old boss, as an operative attempts to protect his partner with whom he pines for something more than a professional relationship, but who does not seem to reciprocate the feelings. A tale of unrequited love in a reality governed by unrequited relationships.

“The Enduring Nature of the Bromidic” might seem to be a similar philosophical undertaking, but rather it imagines the state of immigration in California that might make some folks on the Fox Network uncomfortable. While Salvador Plasencia’s characters are decided underdogs, the shared use of one immigrant’s legitimate social security number results in a happy ending, one that probably couldn’t actually happen, but it would be nice to think could if only so the little guy could take advantage of someone’s misfortune, instead of the usual other way around.

My two favorite stories here are “The Black Square” by Chris Adian and “Memory Wall” by Anthony Doerr. The former takes place on Nantucket, where the narrator intends to step into a black square that has materialized. What happens then no one knows because no one has ever come back. While an obvious metaphor for suicide (and also an indication that the authors here sometimes adhere to the literal requirements of the writing exercise set by the magazine while ignoring the actual intent), the story is a delightful explication of Hamlet’s dilemma of “If it be now, ’tis not to come; if it be not to come, it will be now; if it be not now, yet it will come.”

“Memory Wall” is the most science fictional in a collection of what might be classified more as “literary fiction,” futuristic settings notwithstanding. Here, a technology is crucial to the story, in line with the classic definition that a science fiction story is one in which the story cannot exist without the science. Set in Cape Town, South Africa, whose history of apartheid is not immaterial in a story about those who can rememeber who they are and those who can’t, 74-year-old Alma Konachek is on a prescription treatment  to recover her memories and replay them on a projector as an attempt to delay the ravages of Alzheimer’s.  She is attended to by her servant Pheko, a black man who lives in poverty and endures the daily insults of a white Afrikanner of privilege in order to provide for his sickly son. When Pheko returns to his home every night, Alma in her semi-delusional state becomes an easy mark for Luvo, a memory tapper, whose “pimp” sells memory cartridges on the black market.  One particular memory becomes the basis for Luvo to achieve emancipation for himself and Pheko, while Alma (like most of us, perhaps?) remains oblivious to the workings of the world.

One thing you shouldn’t remain oblivious to is this collection. Suitable for weathering any storm.