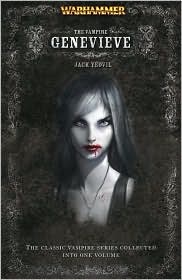 Now that I’m earning my living as a writer rather than fitting writing on the edges of my life, I’ve had time to catch up on some reading for fun; I’ve also been playing some more Heroscape with my kids. I’ve only been at this since the new year, but I’ve leapt into the saddle and spurred forward.

First up were two Warhammer omnibuses, Genevieve, by Jack Yeovil (pseudonym of Kim Newman), and Blackhearts, by Nathan Long. I’d started them over the last few years and gotten distracted and very busy. I recently picked up both and pretty much devoured them.

Being omnibuses, each is a compilation of several books and related short stories or novellas.  And being Warhammer fantasy, they’re both set in a sort of fantastic imperial Austria, where magic works, albeit darkly, and there are elves, dwarves, and other supernatural creatures — most especially the powers of chaos — both on the fringes of civilization and working against it from within. Each is somehow available and in print for around $10.00,  and each weighs in at around 760 pages.  Considering how good both books are, the price point for the value within is almost criminal.

Apparently lots of people already knew that the Genevieve stories are a good read, and have been talking about them for years. I wasn’t one of them. I rarely say a book is exceptional, but this one is, and it will join the small number I’ve read in the last few years that I’ll likely re-visit. Why? Because the prose sparkles without being self-indulgent, because the characters fascinate and come to life, or unlife, as the case may be.

Genevieve is a heroine vampire, but she’s not much like  a Cullen or a Lestat or even a Dracula. Over the course of the tales in the omnibus, she is sometimes central, sometimes incidental, and sometimes entirely absent, and yet because of Yeovil’s masterly prose the reader is swept into every tale. The stories do not necessarily follow chronologically: sometimes an incident or character mentioned in a novel earlier on becomes the focus of a later story, deepening our understanding of preceding events and enriching the world. 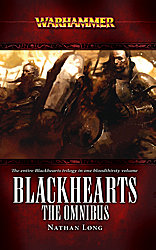 By the time I completed the omnibus, I felt like Yeovil had brought Altdorf, the empire’s capital, to life so effectively that I knew it as well as I know Lankhmar. Is it sword-and-sorcery? Sometimes yes with a capital Y.  It’s always heroic fantasy, and it’s always entertaining.

This and C.L. Werner’s Brunner work (coming in omnibus this April) are my two favorite series out of all the Warhammer fantasy I’ve read.  I know Long’s doing good work for the Black Library writing new adventures of its two most famous characters, Gotrek and Felix, but I wish they’d unleash him to draft new tales of the Blackhearts (please?). This is grand stuff. While the conceit of a fantasy dirty dozen may sound simple, the execution is near perfect, and had me eagerly turning every page, all 768 of ’em.

The Blackhearts are a crack unit of misfits, hard luck cases, and occasional psychopaths, led by a wily schemer named Hetzau Reiner. Reiner’s no slouch with a blade, but he’s no powerhouse or superhero. It’s his wit and never-say-die attitude that carries him (and as many Blackhearts as possible) through to the finish line.

Reiner’s a rogue, but he’s not completely amoral, and he grows protective of his misfits, even if some shuffle off over the course of every novel. Long’s pacing never lets up, and half the fun is watching Reiner find a way through every duplicitous scheme and impossible situation and lead his ragged team to victory (the other half of the fun is divided between the great action pieces and the vivid world building). I was a little afraid that the tales would fall into formula, but Long never let me down. There was always something new and challenging. There were no sloppy loose ends, either. While all the threads were firmly wrapped up by the conclusion, there remains a chance that more tales of the Blackhearts might follow. I sure hope so.

Hmm. Well, I was going to talk about Heroscape, but methinks this entry is long enough as is. I’ll try to drop in later this week to talk of Quasatches and Blastotrons.

I love the Warhammer Omnibuses. They’re beautifully packaged, for one thing, and seeing them all together (as I often do as the review copies accumulate, before getting mailed out) gives a wonderful sense of the both the depth and diversity to the Warhammer universe.

I bought the Genevieve omnibus years ago, after being able to fondle it very briefly before it went in the mail. I just dug it up, and will spend some time with it over the next week.

I was pretty wowed by how good the first Genevieve book was myself — have the Omnibus on my shelf, will read it soonish.

I still have to check out Blackhearts, think I’ll grab it.

Oh, and this line : “Now that I’m earning my living as a writer rather than fitting writing on the edges of my life . . .” was pure awesome — congrats again Howard!

Oh, and you will definitely dig Blackhearts.