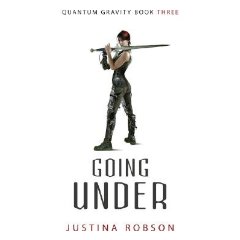 The notion of the female warrior, while rooted somewhat in factual history (e.g., Joan of Arc), is largely an idealized notion of mythology, science fiction and fantasy. I suppose there is doctoral dissertation potential in figuring out why patriarchal societies that at best otherwise relegate women to supportive roles away from the battlefield (and at worst and more typically brutally victimize women as spoils of war) generate these tales of powerful females who can lop off a head or two as well as the next guy. Speaking as a guy whose adolescent sexual fantasies were heavily influenced by Emma Peel, the black leather-clad consort of John Steed in saving the free world from various madmen bent on world domination by delivering a quick blow to the groin, I’m guessing it’s some kind of inversion of castration anxiety.

During science fiction’s New Wave movement in 1960s, a fecund period of feminist fiction in general, the mythos of the female warrior served as an apt metaphor. Joanna Russ’s renowned series of stories collected as The Adventures of Alyx depict the titular heroine as both sensual and tough, a thief and assassin who, in breaking with the stereotype, isn’t Amazonian beauteous. Also breaking the mold is that Alyx is not depicted consistently throughout the series, though the one constant is that she is a “real” person, as opposed to the cliché of the one dimensional fantasy hero, male or female. Alyx was an inspiration for many genre writers, in particular Mary Gentle, whose “realistic fantasies” typically feature a strong, but flawed (as is of course any human) warrior woman, most notably in Ash: A Secret History.

It is perhaps no coincidence, then, that that the first volume of Justina Robson’s Quantum Gravity series featuring the female cyborg (shades of the Six Million Dollar Woman!) secret agent Lila Black is called Keeping it Real. The second is titled Selling Out, and is possibly a response to something Robson alluded to in her only-very-occasional blog:

“I have to say though, after writing answers about why I ‘stopped’ writing ‘serious’ fiction I started to feel tired of defending the point. I have two contradictory reactions: one is that my books are still full of ideas, they just happen to be more overtly silly in places than they used to be, and two, I have to say that for all the thinking in the world, what’s the good of it? Horses to water, and all that. I’d rather have the Sword of Omens and ‘sight beyond sight’… I used to think that thinking could save the world (sort of in the comic book hero style – …must…solve…world’s…problems….uunngh….) and now I don’t. I guess that’s the difference.”

The third and latest (meaning “not final”) volume is Going Under. One sense of this is that Black is in hell, literally in terms of location as well as life experience. Here also we “go under” the protagonist’s (mostly artificial) skin to reveal the protagonist’s emotional state in ways that make fun of genre formulas, not only in epic fantasy, but also the bromides of New Age-styled self-help pronouncements:

Lila had once thought that all great powers of that kind, such as seeing The Truth and suchlike, were the powers of champions which (sic) would grant a kind of immunity from harm. They seemed legendary and otherworldly, supernatural abilities for the rare people who were spiritually developed enough to have gained from them. But no. They were not like that at all. The only thing you could do to acquire them was to stop fooling yourself (though that was not easy when you had spent a lifetime being bamboozled into your illusions by other bamboozled people who came from great long heritages of similarly bamboozled who all had very good and proud reasons for wanting believe bamboozling things).
pgs. 15-16

Let’s back up a little to review a bit of our story thus far. Something called a Quantum Bomb has ripped apart hitherto inseparable dimensions that are now open for visitation and political shenanigans: Earth (now called Otopia and where the regular human folk reside), Zoomenon (home of the elementals, shimmering energy embodiments of the periodic table), Alfheim (land of the elves) and Demonia (fire-breathing fiends), Thanatopia (province of the dead) and Faery (you can’t have an epic fantasy without faeries, can you?), with the hint of a seventh that presumably serves some future plot purpose.

Following an ordeal under shady circumstances in which the head and torso of our tortured and near-dead heroine is reconstituted into a nuclear-powered, AI-augmented, gadget-outfitted, mechanical body, Lila Black is dispatched as a body guard to Zal, an elf rock star famous across realms and whose agenda in living out of his native realm to promote racial harmony are suspect to certain covert government types. Black and Zal fall in love. Black rescues Zal, during which adventure she has absorbed consciousness of the otherwise dead elf, Tath, a detail she is keeping both from her now-husband Zal and her secret agency employer. Zal is also keeping secrets, including for a time his marriage to someone else, whose murder Black is implicated in; Black also gets married to the demon Teazle. And then there is this imp on her shoulder who acts as her embodied superego. Life is complicated (but the sex is sure interesting, even if you are half-machine).

Zal and Black are not living happily after, and it is becoming evident that the organization that resurrected Black views her merely as a tool for as yet unknown ulterior purposes. In Going Under, these two situations further worsen.

As a result of Zal’s recklessness, Black is forced into circumstances where her only course of action (well, actually the hidden Tath’s course of action, things are even more complicated when you are possessed by an elf) results in the death of Zal’s demon sister. A thing like that can strain any relationship, though Zal and Black are soon reconciled. Admittedly a series about elves and cyborgs and people who are dead but not really dead requires considerable suspension of disbelief, so it may seem odd to complain that this is a plot point that just didn’t ring true to me. Robson spends a lot of time setting up duels and explaining the mythos of the various realms, but both the breakup and reunion of Black and Zal struck me as hurried, something necessary to get the plot moving, but insufficiently detailed about the emotional underpinnings of how they could so readily overlook the tragic cause of their fall out.

The overall novel is also “hurried” in the sense of action-packed; this is perhaps unavoidable in the third book in a series in which most of the backstory has already been set and it’s time to be in full-swing action mode, but, still, there are times when I wished things would slow down a bit. Essentially, after some preliminary bouts, the main plot point here is for our various heroes and compadres to set off on a quest, in the Grail sense complete with asking the right question and healing wounds, and to leave you in suspense about the fate of a major character (though the betting heavily favors resurrection). Even without knowing that at least one more volume, titled Chasing the Dragon, is in the works, the current iteration is primarily a set-up for new developments. That’s what multi-volume series do, after all.

Of course, at the center of all this is the character of Lila Black, whose ongoing metamorphosis is the whole metaphorical point. Other than the fact that she is a she, I’m not sure if this is necessarily a feminist work; despite all the fantastical trappings and jokes, Black is, beneath the nuclear armaments and shiny mechanical appendages, a regular human being just like the rest of us, male or female. Unlike a stock epic fantasy character, Black’s experiences (as well, as secondarily, Zal’s) lead to emotional as well as physical improvement. Which is something, alas, many of us in the real world can’t claim. Maybe that’s why they call this a fantasy.

I’m a big Lila Black fan, but these books have too little closure, even for a series. They have more the feel of a single novel that’s been broken up and published in installments. Here’s hoping that the 4th book, Chasing the Dragon, ties-up a whole lot of loose ends.