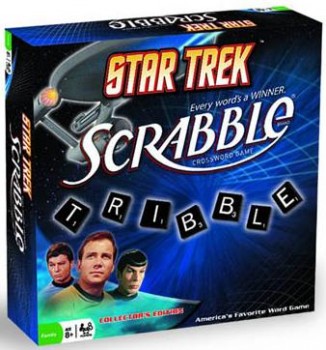 Recently I had occasion to visit the toy store — a rarity in a life spent avoiding children as much as possible — and was sort of blown away by how different it was than I remembered. The last time I was in a toy store was probably as a pre-teen buying Advanced Dungeons & Dragons books (yes, unbelievable as it seems, Fiend Folio and Unearthed Arcana used to share self space with Teddy Ruckspin and Cabbage Patch Kids at the local Toys ‘R Us) and, while I wasn’t surprised to see a complete lack of anything RPG in my visit, what did impress me is just how much fantasy and scifi oriented material I did find — you might even say the place was a juvenile spec fic warehouse, though with a side order of dinosaurs, pirates, and the occasional pony.

But that is sort of obvious, right? SF and fantasy have always been big components of children’s toys, especially for boys, at least since the Star Wars explosion of the late seventies. And that’s true of course, though things seem far slicker and better presented these days (thinking especially of the tremendous Star Trek display I saw as soon as I walked in the door — kids today just don’t stand a chance against stuff like that). And all that big name, blockbuster-fodder stuff was there in abundance, and had permeated down to the smallest level and mutated into weird, unexpected forms: a Transformers chess set, Star Wars Battleship, and the mesmerizingly implausible Star Trek Scrabble (!?!).

What really got my attention, though, were some of the boardgames. They were mostly games I remembered from when I was a kid, but here they were decades later given strange new life. I confess I almost bought the science fiction version of Risk, Risk 2210 AD, before I remembered the chances of me having some friends ’round for a sleep over and all-night marathon game session had dropped to pretty much nil since puberty. And then I saw Stratego. 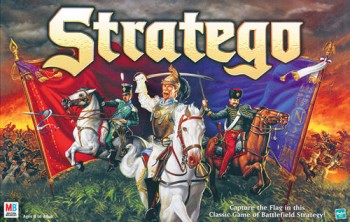 I had sort of thought Stratego was dead (though it turns out that is far from the case). For those of you that don’t know, Stratego is a board game where you line up a bunch of pieces with numerical values that your opponent cannot see, and take turns trying to take each others pieces and discover the opposing flag (usually surrounded by mines). It’s a bit of a memory game with some strategy thrown in, as pieces are revealed with every attack and you have to keep track of where each one is. When I played it — on a second hand set in which so many of the pieces had been purposely marked and counter-marked to reveal their secret identity that a whole second level of guess work and gamesmanship were brought to the fore — Stratego was firmly in the Napoleonic mold, with pieces such as Marshals, Captains, and Sergeants in bearskin shakos.

But this Stratego had Elves, Dwarves, Dragons, Knights and . . . wait for it . . . Lava Monsters! Gone were the etched profiles of 19th century soldiers and the washed-out, water-color field of battle, replaced by a gameboard with an elemental motif of earth versus sky, and colorful, characterful pieces of wizards and warriors. A quick look at the other games around it revealed more of the same, spaceships and wizards and laser tanks and orcs.

And those orcs, it just so happened were in the reboot of another favorite childhood game: Crossbows & Catapults. Now called Battleground: Crossbows & Catapults, it was firmly on a fantasy footing, with knights versus orcs. Those orcs were  unfortunately, a personal bugaboo of mine, green — the Games Workshop-Blizzard meme for green orcs having so far infected the world that even Peter Jackson and WETA workshop can’t seem to persuade us otherwise.

Crossbows & Catapults is a natural for a fantasy conversion, as it features castles and siege equipment and is all about having a big battle on the living room table. The game itself is a simple wargame, with opposing players using the eponymous instruments to flick or lob plastic disks at each other’s fortifications in the hopes of knocking them down. I was glad to see old C&C still kicking, as I had fond memories of it as a child, though, admittedly, I was a bit sad to see the barbarians and vikings replaced, and this game that first introduced me to the term ‘dark ages’ redone into a vanilla fantasy. 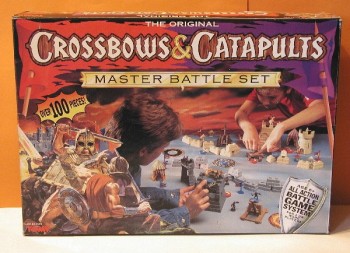 So here’s the thing, here’s my ambivalence about what I’m seeing. On the one hand, fantasy and science fiction have arrived, have become as mainstream as it gets, and I have no illusions that I’m getting the scoop on this story, it really is yesterday’s news. That’s great for storytellers that work in this tradition, as it means the tropes are there in the culture, being absorbed, not out on the fringes. But on the other hand most of this stuff is so bland, tame, and rehashed that it isn’t doing the genre any favors.

But it’s kids stuff! Is one way of defusing that criticism, it isn’t meant to be cutting edge or groundbreaking. True, but that also is part of the point I’m making. I thought all the stuff I saw at the toy store was pretty neat, blog worthy in fact, and I left there thinking about what I’d say, how fantasy has become so thoroughly embedded in our lives our kids are taking it in at the cradle. But now, of course, all that stuff is even further associated with the simplistic, the juvenile, or the just plain bland; and if the notion of using dwarves and elves in fiction was made difficult by the profusion of RPGs, how exactly are we to take them seriously in the age of orc underoos?

Maybe I shouldn’t be thinking in terms of seriousness, but another and more pressing thought hit me on the way home from the store; all those games I’d just saw, and half of the other stuff, too, I remember from when I was a kid.

Which begs the question: where’s the innovation? I didn’t see anything all that new, just the same old stuff in a SF or fantasy wrapper, often to the point where it bordered on satire. As much as I liked seeing old favorites, I can’t help but think there is something wrong with a shelf full of products that hasn’t changed in thirty years beyond the packaging and the ‘Made in China’ stickers. The things I love about genre, science fiction’s new worlds, and fantasy’s evocation of the unfamiliar, is completely absent from this stuff.

Right, so these are kid’s toys and I’m not a kid anymore and how exactly should I react? Maybe it’s just the passage of time and a natural nostalgia on my part, but I can’t help but feel there was something a bit more special about discovering the Dark Ages for the first time through the, admittedly distorted and cartoonish, lens of Crossbows & Catapults, or feeling like I was strategizing like a Napoleonic-era general, than it must be for a kid today to pick up yet another game with green orcs in it. SF and fantasy, in becoming mainstream, are also bordering on the mundane, and the monolithic. The overall impression I get from most of this stuff is that it is an attempt to dumb down, rather than elevate, which isn’t an association I like to have with fantasy and science fiction.

Then again, I could just be a childless, cranky thirty-something that has no business going to the toy store in the first place.
__________
BILL WARD is a genre writer, editor, and blogger wanted across the Outer Colonies for crimes against the written word. His fiction has appeared in numerous magazines and anthologies, as well as gaming supplements and websites. He is a Contributing Editor and reviewer for Black Gate Magazine, and 423rd in line for the throne of Lost Lemuria. Read more at BILL’s blog, DEEP DOWN GENRE HOUND.

[…] I got over my initial excitement, a bit of ambivalence crept in of the sort I can only describe as the Green Orc Blues. And then I get all critical, as I tend to, and can’t escape the feeling that all this […]

Funny, I made the same discovery about Stratego. I was miffed that they made the D&D-style version to original version. Why not just make it a special edition?

BTW – I did find a classic Stratego is still around – Target stores have an exclusive as part of their Library set.

Boy, should have proofread that.

I meant “I was miffed that they made the D&D-style version the standard version.”

What’s wrong with getting kids interested in some European history?

You were in the wrong store for innovation. I suspect nostalgia is the main seller of board games at Toys R Us. For newer games with a SF flavor, you want a game store. Some I’ve picked up in last ten years or so are Elfenland, Castle, Dragon’s Gold, and Titan: The Arena. I wouldn’t expect to find them in Toys R Us.

[…] say if the same is true for Warcraft. One thing is certain, however, and it is that the pernicious green orc meme started by Warhammer and popularized by Warcraft will receive any even greater push in seizing the […]