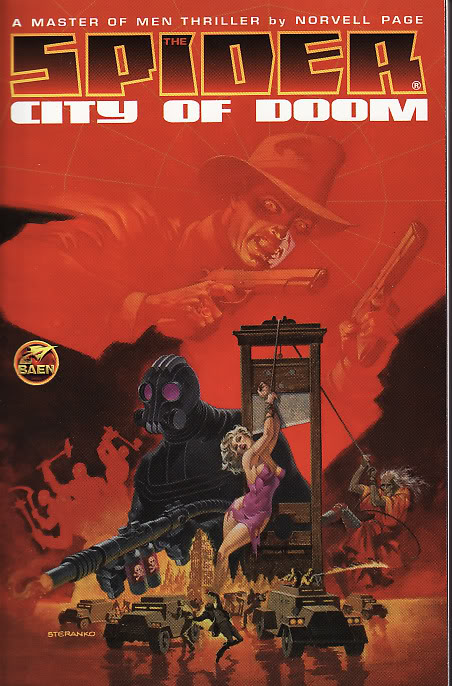 The Faceless One first appeared in November 1939 under the longer title The Spider and the Faceless One, although Page’s original title is The Spider and the Flame Master. The Spider’s adversary is one of pulpdom’s many villainous masters of disguise, the chameleon and mad arsonist known as “Munro.” Page gets to weave heavy paranoia into this story, since the Spider knows that Munro can appear as anyone almost flawlessly; every person in the story is potentially suspect. Munro uses his deceptions to kidnap Nita, and the Spider must rescue her while trying to prevent the villain from burning down more crowded tenements.

Although The Faceless One contains the requisite amount of rat-ta-tat-tat action, it is the weakest of the novels in the two volumes. Page doesn’t seem to have his usual manic interest in the story, and it ends up a touch pedestrian. The only jolt the story provides comes when the Spider faces off against Munro with Nita lying on the chopping block of a guillotine. The mayhem and threat of doom don’t hang heavy over events, and no single scene of horror or action stands out that the readers can recall long after the other details of the plot have faded away. Falling beside The City Destroyer’s apocalypse, The Faceless One’s occasional arson looks like a sputtering flame.

The final novel of the batch comes from a later period in Spider-publishing, October 1940. The Spider goes against The Council of Evil, a many-faceted organization committed to … well, evil. Page originally submitted it under the headline-copying title Crime’s Blitzkrieg. The criminals who have escaped death at the Spider’s hands but now wear burnt mark of the crime-fighter on their foreheads have banded together into a super-baddie organization. They plan to plunder New York with an army of looters while manipulating a brigade of hypnotized graying pensioners into forming a human wall against the police. It’s as bizarre as it sounds, and I love Norvell Page for inflicting it on me.

This is one of the busier Spider novels, with Page packing its length with plenty of subplots. Aside from combating the full-frontal looting and bombing assault of the titular council, Wentworth has to deal with 1) a new police commissioner who will let nothing stand in the way of bringing down the Spider, 2) an onset of amnesia in Nita that might endanger his secret identity, and 3) a squad of hero-worshipping kids who want to get in on the hero act. The plot thread with Commissioner Littlejohn eventually gets lost in the mayhem, and the children don’t make for a promising start to the story, but Page gets some great dramatic fuel from the amnesiac and conflicted Nita. The gang of sidekick kids doesn’t end up half bad either, but I would wager a dime that Page placed this angle into the story to appeal to the magazine’s younger readers who had joined the Spider fan-club and purchased their very own Spider ring through mail. (Now gimme my dime. I have to send away for my Spider ring.)

If the presentation of the two collections has a drawback, it’s the new Forewords by Joel Frieman that read as meta-fanfic rather than introductions. They are clever, especially the use of hard-boiled author Carroll John Daly as a character, but I don’t know what they’re doing here. Considering that potential new fans to the Spider will pick up these volumes (great Jim Steranko cover art will lure them in if word-of-mouth doesn’t), an introduction with appropriate historical information would have been a better choice. You don’t want people wandering into the spinning blades without some warning.

Stay tuned thrill-seekers, for surely Baen will bring back the Master of Men in further collections of pulp pathos. Purchase them all, or be devoured by cholera-infected armies of giant porcupines!

Oh wait, there is a Part 3 to this, although it’s from a different publisher: The Spider vs. The Empire State.

The Amazons brought me a copy of Robot Titans of Gotham just a couple days ago, and I have to admit I found the “foreword” a little off-putting. The first page of “Satan’s Murder Machines” banished all doubt, though.

I only knew Page as the author of Flame Winds (which I wasn’t too crazy about) so this Spider stuff you’ve been writing up has been a real revelation to me. Thanks!

Yeah, I can just imagine new-comers purchasing this volume, reading the foreword, and then thinking, “Huh?” Not at all what I would’ve done if I were the editor.

Look out! Here comes The Spider, man! « Under An Outlaw Moon

[…] Part 2: The Spider Is Here: Trade Your Pistol for a Coffin Possibly related posts: (automatically generated)Itsy Bitsy was neither itsy nor bitsy…discussSpiders (day 1 and 2)The Sartorialist: The BookJohn Updike, Literary Heavyweight Published in: […]

Black Gate » Blog Archive » The Spider vs. The Empire State

[…] the bloodiest of all 1930s pulp heroes. My reviews of The Spider: Robot Titans of Gotham and The Spider: City of Doom, both published by Baen, contain plenty of background about the character and his main author, […]