I currently live in a kingdom–not a modern constitutional monarchy like Great Britain, but a genuine old-fashioned kingdom. It is not very much like those portrayed in a great deal of fantasy fiction. Of course, I don’t live at court, whether as a palace servant or a knight-in-training or an apprentice to a royal wizard. I live nowhere near the palace, though I have once or twice gotten lost and turned onto roads that have taken me nearby. There is no road sign stating that the large and ornate building is the palace and I only know because someone told me. Someone also told me that the little neighborhood of low-rise houses near the palace, which look newer and cleaner than the housing for most Dubai non-professional workers, is where the palace servants live. 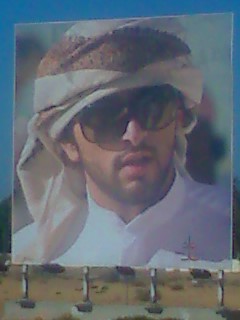 I have never seen a royal motorcade. I do know what the Sheikh and Crown Prince look like because their sincere and soulful portraits adorn billboards on the major roads of Dubai, and because some patriotic citizens decorate their car windows with said portraits, looking rather (to my jaundiced American eye) like pictures of Elvis, or Jesus. The Sheikh is often portrayed in the newspaper greeting foreign dignitaries, and the police station, where I have now been twice for traffic accidents (a long and sorry post in and of itself) has a framed picture of him behind the counter.

There is an inner circle, I gather quite a few rings of it. I am not connected with anyone who knows who or what they are. The business radio here refers to “Dubai, Inc.” as a shorthand for the murky relationship between the vastly wealthy royal family, the government, and the major government-owned corporations. When I read in the paper about officers of these corporations doing or saying this or that, I assume they must be members of one or another rings of the inner circle(s), but I don’t really know. My sister knows the Moroccan veterinarian who used to care for the Sheikh of Abu Dhabi’s racing camels, and he must have met one or two of that kingdom’s inner circle, but he is in the professional class, ranking higher than a cook but somewhere below a minister or a real estate CEO.

Sometimes people say that the Sheikh must have done or said such and such for something to have happened. Recently, after several corruption arrests of very high-profile executives (I assume from the inner circle), I heard in several places that the Sheikh must have given the go-ahead; the Sheikh, people say, doesn’t like corruption. But the government has no transparency; announcements are made, and then presenters and citizens puzzle over the meaning and motivation behind them to each other, on talk radio, in the newspapers, etc. Recently the neighboring emirate of Sharjah announced it would no longer give driver’s licenses to anyone lacking a university degree. Some people think it’s to reduce congestion (horrible beyond belief in Sharjah). Some think it’s discriminatory; others think it’s a fine thing, but how many cooks and maids can afford a car, anyway? No one knows the real reason. Dubai is cracking down on shared apartments. It’s supposed to be a fire and health hazard. Five single professionals living in a five-bedroom villa is a fire hazard? Again much speculation about motives; in the face of massive public criticism, the government merely repeats its justification. It’s all opaque, mysterious, arbitrary.

Newspapers can criticize the bureaucracy but not the royal family. I don’t know much about the royal family, except that there is a Crown Prince, and that one of the Sheikh’s brothers is head of the armed forces and is said (i.e., I saw it in a guide to Dubai) to be the main mover behind the economic development here. A woman from the Ras Al Khaimah royal family is the UAE ambassador to Switzerland, or maybe it is Sweden. On a recent trip to Abu Dhabi, I saw a family tree of that kingdom’s royal lineage. It showed all and only men, the more recent generations pictured with small portrait photos. Several of the men had fifteen or twenty sons, not distinguished according to whom their mothers were.

I have heard dark and evil rumors about the proclivities of other royals. In a US newspaper I read about wealthy Emiratis buying young girls of 8 or 9 (and some buy boys, too, I am sure) in Pakistan, but no whisper of that appears here.

If I were to write a fantasy set in a kingdom based on my experiences here, would I make the king and his family good and wise, or evil and incompetent? What I think (with no particular evidence) is that they have lived in such wealth, privilege, and isolation that they would have a very strong sense of entitlement, and little idea of what passes in the rest of the world for reality. Relatives who buy little girls abroad still sit at the family table. I don’t know if the royal family would be very interesting as characters, except in a secondary role. (“Prince” sounds romantic, but the reality of “spoiled rich kid”–I went to school with some–is not.)

There is certainly scope for Leiberian fantasy in this setting, especially when you consider all the gods and magic systems expatriate workers have brought with them. Our Lankhmar heroes would, however, likely become depressed in short order from the local restrictions on alcohol and the very high male-female ratio, the latter especially in the seedier districts where laborers are crowded cheek-by-jowl.

For me, this setting cries out for stories of ordinary residents in which the rampant speculation and lack of knowledge about palace life are part of everyday life, and what is front and center are the inequalities, the incredible ethnic mix, and the puzzling and even comic arbitrariness residents have to live with. Am I writing any? Nah, not yet.

“Dry Times in Lankhmar”–in which the new overlord of the City of the Black Toga is a celibate teetotaller and forces everyone else to comply. I see Sheelba of the Eyeless Face teaching the Gray Mouser to make a still while Fafhrd joins the Lankhmarian equivalent of AA… The crystal has gone dark, I can see no more.

This may get repetitious, but I’m really enjoying these dispatches from Dubai.

That is a fascinating questiona about the relative “good” or “evil” nature of the royal family in such a fantasy setting. I’m working on a novel now that explores life in several royal settings. Royals can get away with things (and in many cases are supposed to get away with them) that would be considered taboo for non-royals. Every royal house that you examine (in fantasy or reality) will probably have both “good” and “evil” behaviors. In fact, that’s where I find things getting very interesting. A family can be the spawning ground for heroes and monsters, champions and villains…and the common denominator is that royal children have far more privilege and means to follow their proclivities–whether those be of the “good” or “evil” bent.
I think George R. R. Martin handles this fantastically in his SONG OF ICE AND FIRE books…the house of Lannister is largely a selfish, “evil” clan, but it also spawns Tyrion, who is one of the most misunderstood tragic heroes in all of fantasy literature. Also, like any “regular” family, royal families can have internal tensions that turn individual members in opposite directions–such as questions about lineage and accusations of bastardy, etc. This goes back to the old question of “nature vs. nurture”–what causes some people to turn out “good” and others “bad/evil”? There’s probably a different answer for every person…with some generalities. If royals are taught perspective and made to see the real value of human life, there’s a much better chance of them becoming good human beings (and good rulers); when they’re not, they have a tremendous chance of becoming monsters who indulge their own perverse whims. (I’m resisting the urge to do an Elric/Yyrkoon comparison here!)
Interesting post…

A problem I have with a certain portion of fantasy–and other–literature is the notion of good and evil as absolutes when it comes to human beings. And when it comes to matters of statecraft good and evil become even more intertwined. It’s quite interesting to see the mainstream coverage over here of events like US bombing raids on the Afghan-Pakistan border. Are they killing culpable terrorists (the US take) or the innocent civilians (e.g. children) who happen to be in the house at the time? Yes…