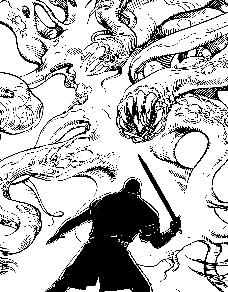 Manvayar’s old master had been a secret necromancer, a man capable of enormous evil who had hidden his torturous art from everyone. Now Manvayer serves the High Temple’s inquisitors, ferreting out just such forbidden evil. But his first assignment may well prove to be his last, as he unknowingly stumbles into a deadly plot among the ruins of an ancient culture. . .a plot that conceals the machinations of an emerging necromancer of terrifying power.

Judith Berman’s “The Poison Well” originally appeared in Black Gate 7, and was praised as “a moody, brooding, intricate tale of necromancy, vanity, and vengeance [with] palpable suspense… an imaginative and ghostly tale” by SFReader.

“A mini-epic of magic, mystery, lust, and obsession… it blew me away,” said Eric M. Cherry at Twilight Tales.

Now we are proud to present it online, complete in its entirety with the original art by Denis Rodier.

If you enjoy it, be sure to read the lengthy two-part interview with Judith which explores the story’s background and genesis, at Twilight Tales Online.