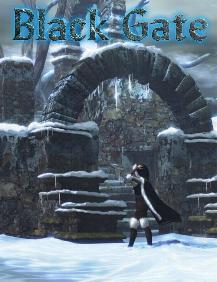 Two investigators stumble across far more than they bargained for as they ferret out a deadly necromancer among the ruins of an ancient culture. . .a small band of condemned souls begins a thousand-mile journey across a landscape of horrors to escape hell. . .a young woman battles ghosts and worse to bury a cursed heirloom on a haunted island. . .and a young hero leads his ragged followers in an audacious daylight attack on the unsuspecting aliens who have ruled earth for millennia.

All that and a lot more awaits you in the latest big issue of Black Gate. “Each issue is fat enough to make up three or four issues of most of the other fiction semiprozines,” noted Gardner Dozois in his annual magazine summary, and this issue is no exception — it comes packed with novellas and short stories from Mark Sumner, Judith Berman, Don Bassingthwaite, Todd McAulty, Holly Phillips, and many others. There’s also a detailed and entertaining look back at one of the great pulp magazines, Planet Stories, from Rich Horton, plus columns and reviews from Claude Lalumiere, Lisa DuMond, and Don Bassingthwaite, and much more. And don’t miss our exclusive Knights of the Dinner Table comic strip!