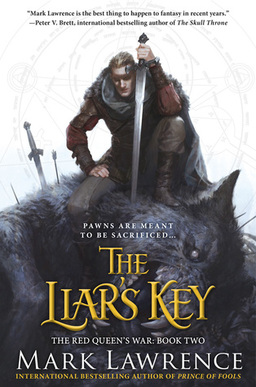 The Liar’s Key, the second book in Mark Lawrence’s new series The Red Queen’s War, will be published this June. The first volume, Prince of Fools, was released in June 2013; this new volume continues the story of the unusual fellowship between a rogue prince and a weary warrior. It is set in the same world as his previous trilogy The Broken Empire (Prince of Thorns, King of Thorns, and the 2014 David Gemmell Legend Award winner Emperor of Thorns).

We published the first chapter of Prince of Thorns, with a brand new introduction by Mark, here, and Howard Andrew Jones’s interview with him is here. Mark’s long article on writing and selling The Prince of Thorns (and the rejections he got from Black Gate in the meantime) is here.