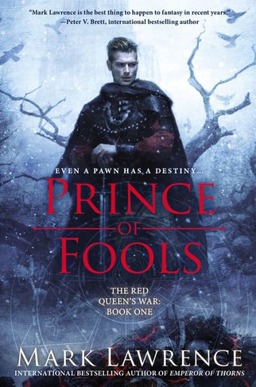 The book I’ve written, Prince of Thorns, has layers, rather like an onion (or an ogre). I hope it can be enjoyed as a violent swords and sorcery romp. Get your teeth into it though and there’s more there – it’s as much about our prince as it is about what he does. This is a damaged person and although the story is told in his words without a hint of excuse, there are lessons to be learned between the lines. It wasn’t until tonight though, desperately scratching at the subject in the effort to come up with something to say in this blog post I was invited to supply, that I discovered another layer, deeper still…

In Prince of Thorns the main character has suffered a personal disaster. It’s not the ‘evil threatens the village’ of classic fantasy. It’s not injured pride or a looming darkness in the east. He’s been screwed over, a tsunami has rolled through his life and left devastation. And the book is in large part his reaction to that… It’s only through the lens of half a decade and more that I see I was writing out… not a version of my own experience, but a mapping of the emotions.

We published the first chapter of Prince of Thorns, with a brand new introduction by Mark, online here.

The numerous fans of The Broken Empire trilogy will be thrilled to hear that Mark Lawrence returns to the Broken Empire with his next book, coming June 3. Prince of Fools tells the tale of The Red Queen’s grandson, Prince Jalan Kendeth, a man tenth in line for the throne, who nonetheless finds life quickly becoming very complicated indeed…

The Red Queen is old but the kings of the Broken Empire dread her like no other. For all her reign, she has fought the long war, contested in secret, against the powers that stand behind nations, for higher stakes than land or gold. Her greatest weapon is The Silent Sister — unseen by most and unspoken of by all.

The Red Queen’s grandson, Prince Jalan Kendeth — drinker, gambler, seducer of women — is one who can see The Silent Sister. Tenth in line for the throne and content with his role as a minor royal, he pretends that the hideous crone is not there. But war is coming. Witnesses claim an undead army is on the march, and the Red Queen has called on her family to defend the realm. Jal thinks it’s all a rumor — nothing that will affect him — but he is wrong.

After escaping a death trap set by the Silent Sister, Jal finds his fate magically intertwined with a fierce Norse warrior. As the two undertake a journey across the Empire to undo the spell, encountering grave dangers, willing women, and an upstart prince named Jorg Ancrath along the way, Jalan gradually catches a glimmer of the truth: he and the Norseman are but pieces in a game, part of a series of moves in the long war — and the Red Queen controls the board.

scratches head in puzzled manner, mumbles “that can’t be right”, quits goofing off and goes back to grading final exams

continues to mumble “that can’t be right” while grading

Whoops! Somehow managed to drop a “2”.

I’ve fixed it. Thanks for the catch!

Isn’t the mc supposed to be a kid? So how come Ewan McGregor is on the cover?

You’ll have to read it to find out! I hear Natalie Portman is in the book as well. She plays the Red Queen.

As long as they don’t hook up with a comedy relief amphibian I’m in.

[…] new series The Red Queen’s War, will be published this June. The first volume, Prince of Fools, was released in June 2013; this new volume continues the story of the unusual fellowship between a […]