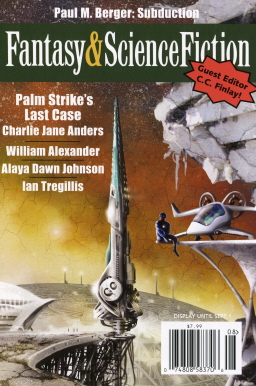 Holy cats! C.C. (Charles) Finlay is the guest editor of the July/August issue of F&SF.

How did this happen? Did Charles win some kind of contest? Did he travel back in time and convince regular editor Gordon van Gelder that the previously-planned July/August issue would lead to an apocalyptic future timeline? Was he selected in a process of elimination from a group of a dozen contestants in a grueling and deadly contest of wills?

Nah. Gordon asked him to do it, and Charles said, “Sure.”

Here’s how Charles says it went down on his blog:

About 13 years ago, I made my first short story sale… it was to Fantasy and Science Fiction – the magazine that published writers I grew up with, like Ray Bradbury, Ursula K. Le Guin, and Stephen King. That was a rush. Nothing since – not award nominations, not other short story sales, not book sales – has been quite as exciting as that first sale.

I’ve wanted to try editing for a while. Maybe it’s all the workshopping I’ve done, the excitement of seeing a great story for the first time before anyone else gets to read it. Maybe it’s the time I’ve spent as resident editor at the Online Writing Workshops… So when F&SF publisher Gordon Van Gelder asked me if I was interested in guest editing an issue of his magazine, I immediately said “Yes.”

Charles has a history with Black Gate magazine — we published his story “The Nursemaid’s Suitor” in Black Gate 8 (back when he was Charles Coleman Finlay), and I think we’ve published him in our Letters Column once or twice. The man pays attention to fantasy magazines, and I’m very curious to see what he’s discovered at the helm of F&SF.

Charles has gone well outside F&SF’s usual group of regulars to fill the issue, and I think that’s a good thing. Here’s C.D. Lewis from his Tangent Online review:

This issue of Fantasy & Science Fiction presents thirteen original stories from authors Fantasy & Science Fiction has never previously published. That’s not to say the authors are all new to print, or that you won’t recognize some names from their awards, but they’ve never previously been in F&SF. The stories range from comedy to horror, the subjects range from superhero tales to normals escaping by the skin of their teeth, and the settings range from the age of sail through the current time to laboratories orbiting distant worlds. This issue’s got something for everyone.

So far the issue has been well reviewed, and Charles revealed on his blog that he has been asked to edit two more issues of F&SF in 2015.

[…] replaces Gordon van Gelder, who has been editor since 1997. C.C. Finlay was the guest editor of the July/August 2014, which was well received, and had been expected to edit two additional issues in 2015. Several […]

[…] editor C. C. Finlay has been acquiring fiction at a good clip (and indeed, his very first issue, July-August 2014, produced a Nebula Award winner, Alaya Dawn Johnson’s “A Guide to the Fruits of […]

[…] Guide to the Fruits of Hawai’i” by Alaya Dawn Johnson (F&SF, July/August 2014) “Cimmeria, from the Journal of Imaginary Anthropology” by Theodora Goss (Lightspeed) […]