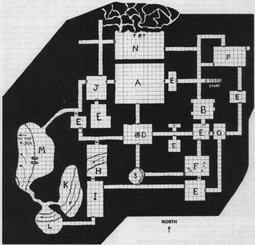 As a kid, Dungeons & Dragons introduced me to a lot of things, from fantasy books and authors I might otherwise not have encountered to obscure medieval weapons (like the voulge-guisarme) to equally obscure vocabulary (such as dweomer or weal). Reading my D&D books and modules was literally an educational experience and I am not ashamed to admit that many of my adult interests have their origins in things I first discovered through the game.

D&D also introduced me to the idea of using graph paper to make dungeon maps. Pictured to the left is the first dungeon map I ever saw (unless one counts the board to Dungeon!, which I don’t). The map appeared near the end of the blue rulebook included in my Basic Set and depicts one level beneath the ruined tower of the sorcerer Zenopus. As you can see, the map includes a square grid, with each square representing a 10 × 10 area, as was traditional in all the TSR Hobbies versions of the game. My Basic Set also included an adventure module, In Search of the Unknown, about which I talked before and its two-level dungeon exercised an equally strong influence over my young imagination.

I was, of course, familiar with graph paper, having used it in school during math classes, but I’d never seen it used for any other purpose. Consequently, I was a bit surprised to discover that D&D players bought it in large quantities, both referees in creating their own dungeons and players to keep track of their characters’ explorations of said labyrinths, lest they become lost and unable to find their way out again. I may have thought it odd at first, but I dutifully paid a visit to the local office supply store and bought myself a pad of paper so that I could get down to the business of laying out subterranean mazes of peril to inflict on my friends (or their characters at any rate). 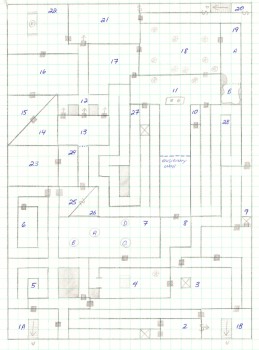 I don’t recall what my own first dungeon map looked like. I’m pretty sure it was strongly “inspired” (to put it charitably) by the map in my rulebook. Whatever it looked like, it no longer exists, much like most of the many maps I made in those days – and I made a lot of maps. Oftentimes, it seemed as if that’s all I ever did. Once I got home from school, I’d race through my homework and then I’d head up to my room where I’d tear off another sheet of graph paper and, pencil in hand, begin mapping.

I can’t begin to imagine how many pages of graph paper I went through in those days. I was creating innumerable maps, a good percentage of which were never actually used at the table. In most cases, that’s because I was unhappy with the final results. I rarely had a plan of what I wanted to map. Instead, I simply let my hands move, as if of their own accord, drawing corridors, rooms, and doors wherever they seemed “right.” Occasionally, I might decide something in advance, like “I want a big room in the center” or “There need to be some caves in the northeast.” Most of the time, though, I gave my subconscious free rein and didn’t have any clue what sort of map I’d end up with till I had filled every square (or nearly so) on the page. I suppose it’s little wonder, then, that so many of my early maps were discarded before I sat down to roll some dice with my friends.

A notable exception – both to not having been planned and to having been discarded – is the map to the right, the first of several levels I drew for my version of the Temple of Elemental Evil. Since I’d run my friends through The Village of Hommlet sometime in 1980 or ’81, we were keen to continue on to the Temple, whose minions they’d defeated at the Moathouse. But there’d be no official version of the Temple for years to come. Rather than wait, I made up my own. I no longer have the key to the dungeon, but several of the maps survived and, while I’d make no claim that they were good, let alone inspired, I do take a certain pride in them even today. Yes, they’re derivative – notice, for example, the pools in Room 7, which recall the Pool Room from In Search of the Unknown – but it was a big undertaking for me as a kid and my friends and I had fun, which is what really counts, in my opinion. 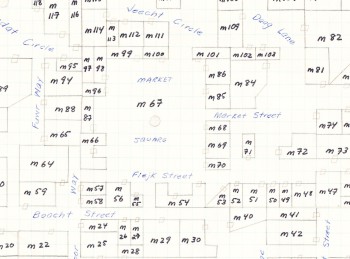 My confidence bolstered by the Temple of Elemental Evil project, I started to get more ambitious in my mapping endeavors. I wanted to create even bigger maps, which necessitated my purchase of larger graph paper. It took me a while to find paper that was as large as I’d wanted, but I did eventually. The paper came in the form of a desk blotter and each sheet was probably close to four of the letter-sized sheets I’d been using previously. Needless to say, I was in heaven. Now I could do some serious mapping.

My initial forays into mammoth mapping were, as I recall, mostly cave complexes. I think I’d been inspired by the Caverns and Warrens of the Troglodytes from module D1, Descent into the Depths of the Earth, whose vastnesss impressed me at the time. But, callow and arrogant youth that I was, I wanted to one-up Gygax and do something even more impressive in its scope. I remember the end result being truly large, with something close to 200 individually numbered locations, many of them lairs for the most bizarre creatures I could find from the Monster Manual and Fiend Folio. Alas, I never used this map in play and it disappeared in the decades since.

One map that has survived, though, is the one to the left, which depicts one quarter of the city of Zwardzand, a rather unpleasant place from my campaign setting. Though most of its details came from my own imagination, I readily admit that some of them, including its name, were “homages” to the Ian Livingstone-penned Fighting Fantasy book, City of Thieves, which I read around this same time (1983). I was also inordinately proud of the map of Zwardzand, since it wasn’t a dungeon but rather an above-ground locale the characters would occasionally visit. The city took up a single sheet of large graph paper, meaning it was small in absolute terms, though it was still big in its overall conception.

It’s funny how, more than three decades on, looking at these maps brings back so many memories for me. I suppose I shouldn’t be surprised, though, given how much time, effort, and love went into making them. I don’t regret for one minute how much of my young life was spent crafting imaginary worlds out of little blue squares. If anything, I wish I had more time to do that today.

James, did you ever try out the random dungeon generator in the back of the 1st Edition AD&D DMG?

I spent hours upon hours rolling dice and draw on map paper. Of course none of the dungeons made any sense, being random and all, but it was fun. Never used any of them in a game.

I did use it occasionally, but, like yourself, I never found the dungeons particularly useful as anything other than as a diversion for me.

For me the big revelation after graph paper (and hex paper) was isometric graph paper (which we used in one of my high school drafting classes; this was before Dungeoneer’s Survival Guide was published). Having said that, I didn’t really use it for dungeons — I used it for making hull designs for Traveller spaceships.

In my little hometown I remember graph paper being somewhat difficult to get; so you would use every possible square when mapping a dungeon because you didn’t know when you’d get your hands on more graph paper.

I used the random map generator in the DMG, but only when running myself through some solo gaming. (There was not enough gaming in high school. It wasn’t until my junior year in college that weekly games became the norm.)

More recently I played around with online random map generators when I needed to set up a one-off C&C game for some newbies. However, I eventually used a nice little two-level dungeon I pulled from an online map archive. Sprinkled in some rubble to block off a few areas, and it was good to go.

I used four-, five-, and ten-squares-per-inch paper. The latter was glorious for sprawling complexes. But my most ambitious endeavor involved one-square-per-inch paper. I cut the entire complex–building interiors and dungeon–out of this paper and laid it out for the players’ miniatures as they explored.

This required me to be clever about hidden elements like secret rooms, as I had to visually hide them. I recall one player being very proud of himself when he spotted an anomaly, searched for and found a secret door, which I have to say was pretty cool.

That dungeon is where Terb Morbrek cut his teeth. I can almost hear the dice bouncing on the table.