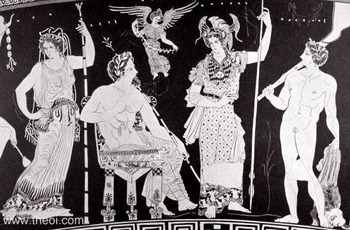 After the invocation of the Muse of Love that I discussed two weeks ago, the Argonautica launches into what is, quite honestly, one of my favorite scenes in all of ancient literature.

Apollonius gives us a conference among the gods to discuss our heroes’ fates. Homer has done the same on multiple occasions, but here, the conference is between two of Olympus’s leading goddesses, Hera and Athena.

Much as in the Odyssey, Athena is here fulfilling her role as the tutor of young heroes. She supports Jason in his quest much as she did (will) Odysseus. Hera also now stakes her interest in the outcome of the Argonaut’s quest: She really doesn’t like Pelias and wants to see him destroyed.

Together they decide that the best way for everyone to get what they want out of this is for Medea, the daughter of Aeetes, to fall in love with Jason. Not a little schoolgirl crush, either. No, this has to be a big whammy of a love, so much so that she is willing to betray her father and her people in order to assist Jason in his quest .

There’s just one problem: Athena’s a virgin and Hera is married. They know nothing about falling in love.

I’m not being snarky. That’s precisely what they say.

There is, however, a seduction expert on Olympus, and Athena and Hera go directly to her house to discuss the matter. And this is where it gets fabulous. Because Apollonius describes it precisely the way you would expect it to go when two uptight society matrons go to visit the local madam for amatory advice.

They walk up to a house grown over with fragrant flowers. They pause at the gate, and Athena informs Hera that she can go no further than the entryway, and that Hera will have to do all the talking.

And those are the last words Athena speaks for the rest of the scene.

One commentary I saw attributed this to “maidenly modesty”, which is legitimate. But I don’t think it gets at the heart of the matter here.The real issue isn’t Athena’s virginity or Aphrodite’s distinct lack thereof. It’s Athena’s status as the goddess of Wisdom. She cannot speak in Aphrodite’s house because when desire moves in, wisdom loses all power. Lust and common sense are completely and utterly incompatible. And anyone who’s ever been in such a state knows it.

Aphrodite is in the atrium of her house. It’s late morning, but she’s still en dishabille and is in the process of doing her hair. Upon seeing Hera and Athena, she knows that they must need something: “Good friends, what intent, what occasion brings you here after so long? Why have ye come, not too frequent visitors before, chief among goddesses that ye are?”

Translation: You were too good to come before, so what do you want?

Hera sees right through her Minnesota Nice act. “Thou dost mock us, but our hearts are stirred with calamity.” She then asks Aphrodite to send her son to shoot Medea with his infamous bow. Problem: Eros is grounded for being a spoiled brat and isn’t speaking to his mother. This dilemma is, in turn, resolved with maternal bribery, and Eros flies off to begin one of the worst relationships in human history.

As I said, I love this scene. It may well be Apollonius’s most creative, and it goes a long way towards defining the entire Hellenistic idea of art. It blurs the line between high and low art, the epic and comedic as well as between the divine and the mundane. And as a quick character sketch, it’s incredibly charming.

But it is also brutally ironic. All the cute plotting, the wheedling of Aphrodite and the groveling of Hera, this entire adorable episode leads up to a marriage that will, within its first days, lead to murder. And that’s just the beginning.

I feel like I’ve ended a lot of posts this way, but the Argonautica is written that way. Apollonius is writing this cheerful little Alexandrian epic, but the whole time the seeds of chaos and blood are sewn through it. So either the author is attempting a futile task and is trying to ignore everything to come while writing or he has a sick sense of humor. I’ve never decided which.

I enjoyed your take and now really want to read the Argonautica.