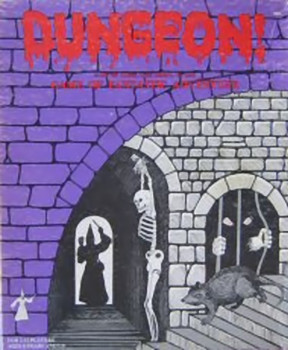 Whenever Christmas looms, my thoughts turn not to decorations, carols, and presents; but to dungeons. Actually, that’s not entirely true. My thoughts do turn to presents – or, rather, a single, very specific present, albeit one received not by myself, but by a good friend of mine in 1979.

Among my childhood friends, it was traditional that, during the Christmas break from school, we’d all take turns visiting one another’s homes to marvel at our respective holiday hauls. Together, we’d then play with whatever we deemed the most interesting presents. In the dying days of the 1970s, that typically meant Star Wars action figures (or perhaps Micronauts) and so it was that year. I believe that was the year that I received the much-coveted Imperial Troop Transport vehicle and so became the envy of my friends. But, cool as it was to be able to push a button on the Troop Transport and hear sound effects from my favorite movie, that wasn’t the Christmas gift that most interested me.

That honor fell instead to a strange little board game my friend Mike received. I say “strange,” because the “board” wasn’t really a board at all, but rather a folded up piece of thick paper that didn’t lay very flat on the table unless you held down the corners with books or other heavy objects. This board depicted a bunch of colored boxes connected by meandering yellow spaces, with a few larger spaces here and there. These larger spaces were all given rather evocative names like “King’s Library” and “Queen’s Treasure Room” and “Torture Chamber.” Flimsy though it might have been, the board nevertheless caught our attentions – and fired our imaginations.

The game, of course, was David R. Megarry’s Dungeon!, which was first published in 1975 by TSR Hobbies.

My friends and I, who were between 7 and 9 years old at the time, had never seen a board game like this before. What the map lacked in production values, it more than made up for in mystery. Since we hadn’t yet read the rules, we had no idea what the board represented, though we guessed that it must have been a castle or something similar, given all the references to royalty and treasure. You must remember that, in 1979, the notion of a “dungeon” as an adventuring locale wasn’t yet widespread. When my friends and I thought of a dungeon, we thought of a bunch of cramped jail cells located underground. The only “treasure” to be found there were manacles and slop buckets or maybe some instruments of torture. I doubt we were unusual in this regard. 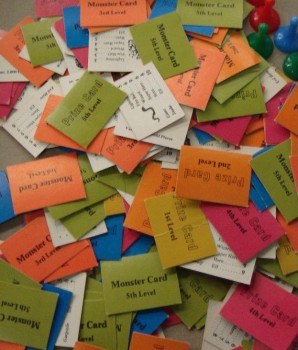 As we examined the rest of the game’s components, we were no less intrigued. The playing pieces were disappointingly mundane, like the ones you’d find in Sorry! or Parcheesi. The multitude of cards with which the game came, on the other hand, were exactly what we’d hoped for. Two types of these cards, monster and prize cards, were both color coded. We quickly (and correctly, as it turns out) surmised that they were probably keyed to the colored boxes on the board. Of the two, it was the monster cards that most strongly attracted us. Whereas the prize cards simply depicted treasures of various sorts – jewelry and gems worth various amounts of gold pieces – the monster cards gave us a bizarre menagerie of beasties. Some of them, like giant rats or snakes, were fairly mundane. Others, like werewolves and vampires, were already well known to us through other media. Dungeon! gave us odder foes, though, like green slimes and black puddings and “evil superheroes,” whatever they were. I’m sure we tried to make sense of it all, but, truth be told, we were so overwhelmed that I don’t think we could do much except gawp. What was this game?

Eventually, one of us – probably me, since I’m the kind of boring stick in the mud who would – decided to read the actual rules of the game, so that we could finally play Dungeon! and do so “properly.” Over the course of the next week or so, we spent the vast majority of our holiday free time playing Dungeon! and thinking about the “world” it represented. This world was inhabited not just by wizards and elves, but also by heroes and superheroes, the latter of which most certainly did not wear tights and a cape. There were magic spells, goblins as well as hobgoblins, dragons in a variety of hues, and giant vermin of several sorts. Who came up with all this crazy stuff?

I’m not sure I can truly sum up the vistas that Dungeon! opened up for us. Prior to that Christmas break, “fantasy” was the realm of fairy tales and King Arthur’s knights. There were monsters and there was magic, yes, but they were both of a narrow and limited variety. And, as I said, a dungeon was a place where a beautiful damsel or an unlucky hero might be held for a time, not a place one voluntarily entered seeking gold and glory. Now, nearly 35 years later, it’s hard not to think of these things when I think of fantasy. How many other board games have so thoroughly changed a person’s view of the world?

I always made sure to learn the rules too. Of course my friends and I still felt free to change them whenever it suited us, but I did know “the right way” to play.

Ahhh, Dungeon. It brought the same deal of pleasure into my childhood, although I discovered it in a slightly later, early ’80s incarnation. Although the production values of the board and the cards were slightly better by then, as far as I can tell the game itself remained unchanged. I’d forgotten about “Evil Superheroes”! And whoever thought up “black pudding” as a monster? I love it!

I’ve been trying to obtain a copy of the game for some time (in the edition I had, of course, strictly for nostalgic reasons), and finally got ahold of a clean, complete set for somewhat under the $50+ it usually fetches. Now it’s sitting up on the closet shelf, biding its time until my children are old enough to introduce them to it.

[…] I’ve mentioned a couple of times before, I entered the tabletop roleplaying world in late 1979 at the ripe old age of 10. By that point, […]

[…] to make dungeon maps. Pictured to the left is the first dungeon map I ever saw (unless one counts the board to Dungeon!, which I don’t). The map appeared near the end of the blue rulebook included in my […]