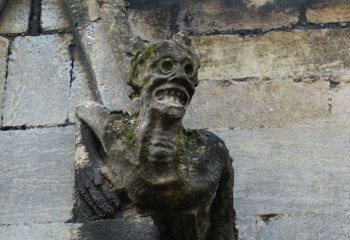 Of all the freakish critters in the original hardback Monster Manual, the one that always made the most intuitive sense to me was the gargoyle. Having seen perhaps more than my share of gargoyles by the time I entered the role-playing realms, I already knew them to be fierce, frightening, toothy, amply clawed, and sometimes winged. It stood to reason that they’d be crafty, pernicious opponents.

What made no sense was why the D&D variety weren’t made of stone, as nearly all true (read: real) gargoyles surely are. To this day, I still have no explanation for that decision on the part of the Monster Manual’s creators, Mssrs. Gygax, et al. They certainly had no intrinsic objection to stone beasties: consider the stone golem or that durable tri-form oddity, the xorn.

In order to better address this incongruity, I have abandoned my regular offices deep in Black Gate’s vast Indiana Compound and taken up residence at Harlaxton Manor, an out-of-the-way 1830s edifice set in the rolling hills of England’s Lincolnshire. Is it haunted? Probably. Not only did one of its previous owners conduct regular séances in the cozier of the two libraries, but the manor has been used in several eccentric movies, including The Ruling Class (1972) and the truly execrable remake of The Haunting (1999).

Are there gargoyles? Yes. But only two.

Luckily, just down the road, in the struggling industrial town of Grantham, an astonishment of gargoyles awaits on the walls of St. Wulfram’s, a mid-sized Anglican church that dates back to the 1200s at least.

Fact the first: most British churches, cathedrals included, boast their share of monstrous gargoyles. Fact the 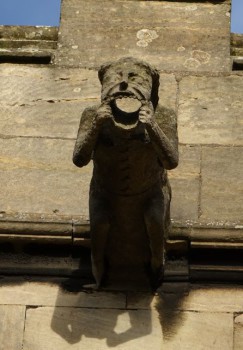 second: stone for stone, St. Wulfram’s masons truly outdid themselves, as you can see from the images peppering this post.

Historians still differ as to the exact purpose of gargoyles. Was it to frighten, to brow-beat a fearful populace into attending church services? Surely that element had its place, but how then to explain the many comical gargoyles, carvings that suggest early issues of Mad Magazine rather than the terrors of hell?

Ken Follett, in The Pillars of the Earth, makes the case that the stonecarvers were often less than fully supervised, and that any given master mason had more important things to consider than what décor went up on the walls. And if those stonecarvers had a keen sense of the absurd and an active imagination, well. Virtually anything might wind up mortared in place, on display for generations.

Fact the third: most gargoyles aren’t gargoyles. Technically, only those designed to obscure or decorate piping and downspouts (for channeling rainwater away from the roofs and walls) are true gargoyles. The rest are “grotesques.”

Possibly the creators of the Monster Manual should have included grotesques as a distinct species. (HD: 2+1. D: varies by type.) 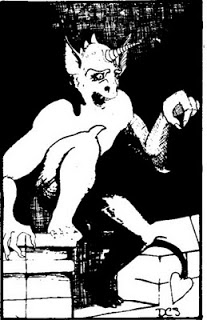 The Monster Manual’s more alarming gaffe should by now be obvious: true gargoyles are attached, barring an earthquake or other demolition, directly to a large building’s walls. Thus gargoyles are no threat to anyone out of reach of their teeth, horns, or arms.

Still, I suppose they were too evocative and creepy to pass up. Likely enough, had I been in Gygax’s shoes, I’d have included them as well, “movement rate” and all. That said, the idea of the gargoyle as a mobile opponent is about as logical as the good old rust monster.

For real fans of this stone-faced art form, may I recommend Nightmares In the Sky, a coffee-table photo book focusing on the gargoyles of New York City and featuring a novella-length “opening word” by none other than fright-meister Stephen King. The author? F. Stop Fitzgerald. No kidding.

The only natural predator of the real gargoyle is weather. Most gargoyles were carved from either sandstone or limestone. Both erode easily and the latter is especially sensitive to acid rain (HD: 20, D: infinite).

Since at least the middle of the nineteenth century, restoration-minded masons have been hard at work all over Europe, replacing original gargoyles with freshly made replicas. Sadly, St. Wulfram’s is low on Britain’s priority list when it comes to gargoyle repair.

Several of their best require immediate medical treatment, like the creature pulling its mouth open, and the skeletal “king” peeling itself off the wall. Gargoyles and grotesques are a perennially endangered species.

As for St. Wulfram’s, it’s off the beaten track, and likely to remain so, despite its 282’ spire, once the tallest in England. Perhaps they should blame their patron saint, or whichever deacon first dedicated the church to him. St. Wulfram, no matter what his merits, is a patron saint of seafarers; Grantham is situated at least fifty miles inland. Go figure.

If anyone else has a theory as to why the gargoyles of Gygaxland weren’t stone, I’m all ears.