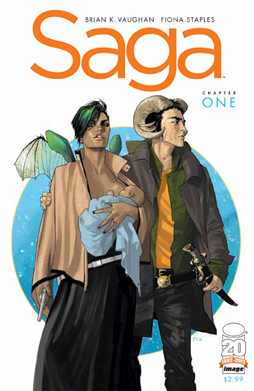 A few months ago, the 2013 Hugo Award for Best Graphic Story was given to Saga, Volume 1, the first trade paperback collection of the ongoing Saga comic book. Written by Brian K. Vaughan, with art by Fiona Staples (and lettering and design by the Fonografiks studio), the book deserved the win. It’s the first chapter in a promising story and manages to establish a simple and powerful basic situation for the main characters, while also creating a complex world, backstory, and array of subplots. If it sometimes seems overbroad, too accessible and glib, it also has a deep and original sense of history to its setting, and a design sense that makes that setting live.

It begins with a birth, a battle, and an attempt to escape war. In a galaxy (presumably) not our own, there is a planet named Landfall, where a species of winged humanoids have developed high technology; orbiting Landfall is the moon Wreath, where magic-using horned humanoids live. Moon and planet have always been at war, but have reached the point where they can’t battle directly in their home solar system without risking their own destruction. So the war’s fought on countless fronts throughout the galaxy, with alien species everywhere forced to choose sides. One front is the planet called Cleave, where the fighting’s especially vicious; there, a woman from Landfall, Alana, has fallen in love with Marko, a former warrior from Wreath. They’ve run away from the war and the book begins with the birth of their daughter — and their discovery by agents of both sides.

The story moves quickly. Factions enlist various agents to track down the young family. And these agents have stories of their own. The book cuts quickly between plot strands, narrated by the newborn daughter speaking from some unspecified point in the future. There are ghosts, robots, pleasure planets, bounty hunters, mass battles, and all the familiar genre furnishings. There are also less familiar things, born from the mash-up of genres. Forests of rocketships. An interspecies romance novel. And a grumpy-looking lynx who can detect lies. It’s an inventive, fast-moving story about parenthood and art that never overstrains its central metaphors. 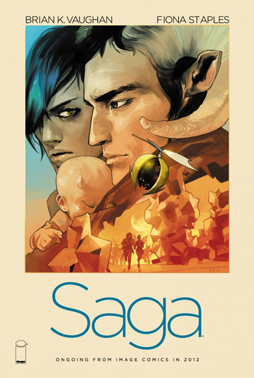 What stands out to me is the inventiveness of the setting. Vaughan and Staples throw one idea after another into the story, which somehow never seems to show any sign of strain. There’s something convincingly alien about all the landscapes and characters we meet, both visually and conceptually. And yet at the same time there’s something recognisable about everything in Saga, something emotionally true.

For all Vaughn’s knack for pacing and cross-cutting, I suspect it’s Staples’ art that really makes the book come alive. The designs — of fashions, of starships, of weapons, of architecture — are both unlike conventional modern things, and yet also recognisable. There’s much playfulness at work, as, for example, in a race of robots with CRT monitors for heads; and also much pure visual imagination. More: the colour sense the book displays is breathtaking. Staples can establish subtle emotional tones, while also making key elements in her page designs dramatically prominent. Her storytelling generally is strong and full of character, moving easily from large establishing shots of alien lands to smaller close-up panels.

Those smaller panels demonstrate her power at capturing facial nuance in rough ink lines (or virtual ink; the art’s all done digitally). The characters are depicted in sketch-like line art, while the backgrounds are lush and painterly — Staples has mentioned being influenced by Heavy Metal magazine and you can see that in the elegant, extravagant colour sense at work. She’s also said that the mix of styles evolved as a way to help meet the book’s deadlines; however it came about, it’s an effective combination. The characters stand out in every panel, and more importantly are rendered with precision. Their stance and their expressions are both natural and expressive. That’s important, given the quick pace and wild ideas of the story overall: the art grounds the story, mixing human truth with quirky design. 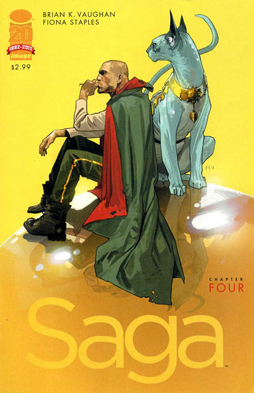 Vaughan’s script is slick and swift-moving, well-crafted and involving. He doesn’t hesitate to use well-worn tropes: Marco’s a soldier become a pacifist with a sword he’s sworn never to draw again. But Vaughan usually digs into the familiar bag of tricks with a purpose, knowing his audience will be there with him — it doesn’t take too long before the sword’s drawn, but then that sequence only sets up a further use of the sword, which suggests a greater character growth. It has to be said that Vaughan’s also got a knack for balancing obvious genre-fiction story elements with surprisingly frank approaches to sexuality and violence; it’s not a question of being explicit so much as acknowledging the messiness of both things. If much commercial writing avoids the complexity of real emotions and the inevitability of unintended consequences, Vaughan makes a point of looking at those same things; it seems to be a part of the emerging theme of the book.

From a certain point of view, a baby is a consequence of love and sex. Childbirth is so often the end of a story, or even something that comes after the end, but here it’s where things really get started. And to tell a story about a newborn baby with any sense of verisimilitude means looking, at least cursorily, at biological realities — changing diapers and breast-feeding and sleeping schedules and all the rest of it. Conversely, Marko, reflecting on his use of violence, is concerned with what comes next: “Violence is stupid,” he says. “Even as a last resort, it only ever begets more of the same.” That statement seems to be at the core of Saga: in part, at least, it’s about consequences and living with consequence. About history, therefore, and war.

Still, the book does struggle against its own instincts, sometimes. Dialogue is quippy and if sometimes it gains some strength from juxtaposing modern language and sensibilities with the high-opera conceits of interplanetary magical war, sometimes it also seems too coolly determined to use contemporary idiom: “Hold on, this app was trying to auto-update and now the whole thing is frozen,” complains a minor functionary in an early scene, fiddling with something that looks an awful lot like a smart phone. There’s a balance to this sort of thing, and occasionally the book missteps, coming off as too mundane, literally too earth-bound, to feel right within the story’s overall context. 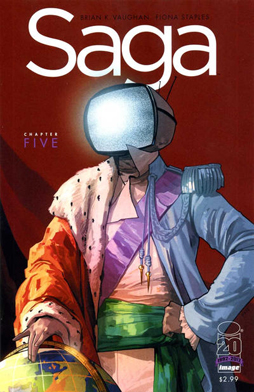 And sometimes genre demands seem to overwhelm human logic. Right after giving birth, Alana’s on her feet, walking, fighting; she is a soldier, sure, and technically not human, but the physical toll still seems like something that ought to be acknowledged. Beyond that, characters come across each other at just the right time for the plot to move ahead. Connections seem convenient. And everybody’s got a smart mouth.

But then the flip side is that there’s real conceptual depth to the comic. Vaughan’s spoken about the thematic concern of the series with creation, the birth of a child as a parallel to the creation of art. Interestingly, Vaughan’s also said that the setting of the series is based on a science-fiction setting he’s been working on since childhood: it’s a paracosm. With that. there’s a depth that derives from the years and decades of thought about these places. And a level of individuality that comes from a consciousness refracting experience through the lens of a created world.

Saga’s a fine comic and fine science fiction. Specifically, it’s fine space opera. The setting’s vast, the story only just too well-structured to be sprawling, the characters intelligent and capable. It’s intelligent, effective, and visually stunning. Sometimes it’s a bit too broad, but the depth of the imagined setting always keeps it distinctive and original. The Hugos got this one right.

Matthew — agreed, this is a great comic. And while it’s not graphic in the same way as many comics, it’s _very_ adult… I would think carefully before sharing this one with your kids.

These days, Saga is one of the few comics series I’m following. Great fun, kind of a Wizard of Oz quirkiness set on a galactic scale, and aimed squarely for mature readers. The art is breathtaking, at turns beautiful and visually hilarious (how about that giant with the giant sack of…?). I’m glad to read your take on it, and to see it get the recognition!