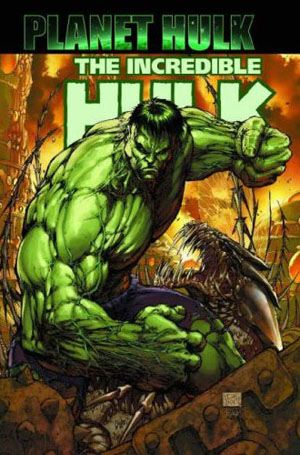 Maybe he will and maybe he won’t, because that is how “scoops” work, and in this case we are dealing with a scoop for a film quite a few years out.

However, Latino Review and their esteemed El Mayimbe have a long history of accuracy with breaking movie news, so when El Mayimbe says that Marvel wants to make a movie version of Planet Hulk as a follow-up to 2015’s upcoming The Avengers 2, it bears serious consideration.

And, if true, damn I’m psyched and ready to Hulk-out. You should be too.

(Caution that El Mayimbe’s video may be considered mildly “spoilery” about the possible end of The Avengers 2. My comments below may also infer bits about Avengers 2.)

Planet Hulk is a long 2006 arc from The Incredible Hulk comic book (with tie-ins) by writer Greg Pak and illustrator Carlo Pagulayan. The gist: A small group known as the Illuminati, composed of the most powerful heroes on Earth, decide that the Hulk is simply too dangerous for the planet, so they shut him in a spaceship and blast his green butt off into space to land on a peaceful planet to spend the rest of his days. Only… this is a comic book and such a development would be boring. Nobody wants to see Hulk traipsing through a shady copse, smiling, and picking up alien daisies. TRA-LA-LA, HULK NO SMASH! HULK LOVE RHODODENDRONS!

Instead, the Hulk’s ship goes through a wormhole, and he crashes on the violent planet of Sakaar. What follows is basically a sword-and-sorcery epic with the Hulk playing a Robert E. Howard hero who battles his way from gladiatorial slavery all the way to becoming the ruler of the planet. Trust me, it’s awesome — breaking away from the traditional “Hulk vs. General Ross” storylines on Earth and fulling embracing the Leigh Brackett and ERB style of muscular planetary romance. (Try to imagine Hulk as the star of The Sword of Rhiannon!) And the whole enormous thing is available digitally from Amazon.

Our own Bill Ward did an excellent write-up of the comic in 2009 if you desire more details.

Marvel already did an animated version of Planet Hulk in 2010, but such means nothing in this new Marvel Cinematic world in the wake of the third highest-grossing film in history. A Planet Hulk movie may sound incredibly ambitious and pricey, but who would have believed back in 2008 that Marvel could pull off an Avengers movie built out of five separate lead-in films? Marvel has also shown that it wants to go cosmic and big in its new slate of films: Thanos is in play from The Avengers, the upcoming Thor: The Dark World looks primed to spend most of its time off-Earth in different realms, and Guardians of the Galaxy is heading our way next year. With Rocket Raccoon! Rocket friggin’ Raccoon is appearing in a live-action flick before DC even gets Wonder Woman in her own film.

Yeah, Planet Hulk could happen. And the willpower to do it is definitely there. The question now is if it actually will.

Hulk was one of the major audience hits from The Avengers (you loved “ragdoll Loki” just like everybody else) and Mark Ruffalo is signed for six movies playing Banner and mo-cap Hulk. Popular reaction to the earlier two Hulk movies was modest (I did enjoy The Incredible Hulk, however), but now viewers seem prepped for more Hulking-out. And the Planet Hulk storyline allows for almost infinite Hulking-out without having to do repeats of what everyone has seen before. A Planet Hulk movie will need to undergo tinkering to fit in with the Marvel Cinematic Universe: some of the Illuminati are characters who belong to other studios right now, so perhaps Thanos or Loki will be the one to hurl Hulk off-world; Ruffalo will probably get extra time as Banner. But there’s nothing that could really hold Marvel back from making a full-throttle attempt at getting the core of what makes Planet Hulk so appealing.

By the time The Avengers 2 rolls around, we’ll have gone through a complete “Marvel Phase 2” with the universe of available characters doubled in size. If we do get Planet Hulk, expect elements from Guardians of the Galaxy to play a part. Perhaps Doctor Strange — a member of the Illuminati — will get a cameo, since a Doctor Strange movie is part of the planned “Phase 3.”

So, until we know more for certain… GIVE HULK BROADSWORD! HULK DISMEMBER!

Ryan Harvey is a veteran blogger for Black Gate and an award-winning science-fiction and fantasy author who knows Godzilla personally. He received the Writers of the Future Award for his short story “An Acolyte of Black Spires,” and his story “The Sorrowless Thief” appears in Black Gate online fiction. Both take place in his science fantasy world of Ahn-Tarqa. A further Ahn-Tarqa adventure, “Farewell to Tyrn”, the prologue to the upcoming novel Turn Over the Moon, is currently available as an e-book. You can keep up with him at his website, www.RyanHarveyWriter.com, and follow him on Twitter.

“Bewildered, unsatisfied, he wandered over the world, a restless Hercules, seeking outlet for the immense vitality that surged tumultuously within him, searching vainly for some form of life wild and strenuous enough to satisfy his cravings […]” Almuric by Robert E. Howard

This would be so sweet.

um there’s a Hulk comic that is sword and sorcery! thank you for bringing this to my attention!

I actually think they may have done something along those lines (Sword & Sorcery Hulk) back in the 1970’s or early 1980’s — I have vague recollections of reading some random issue in which the Hulk was shrunk to microscopic size and injected into Banner’s brain to fight some parasite or something, then at the end got hit with another shrink ray and the teaser page looked like he was going someplace vaguely barbaric. But I never actually had the next issue so I can’t be certain.

Hey Joe, Hulk actually recalls that older s&s storyline in Planet Hulk; he became king and fell in love with a Princess iirc.

Joe, Hulk did indeed get shrunk down and sent to a subatomic world where he met Jarella, green-skinned Empress of her world. This was way back in the 70s.

And you want to know who wrote the relevant storyline?

Harlan Ellison?!? Oh my. And it’s good to know that the storyline actually existed and wasn’t just another Crunchberry-induced hallucination. Thanks!

The entry at Marvel Wikia: http://marvel.wikia.com/Incredible_Hulk_Vol_1_140

Ah! Actually, the issue I was thinking of was #200, which would have led into #201 (which I never read). Thanks for the wikia link!

(And I guess the Hulk, in #200, was stomping around in Glenn Talbot’s brain.)

I looked at that issue #201… “Kronak the Barbarian”? Wonder what other current hit Marvel publication inspired that character?

The cover tries very hard to make readers think this is an actual Hulk/Conan crossover.

[…] Make this true or Harvey Smash: Planet Hulk to come after Avengers 2 […]