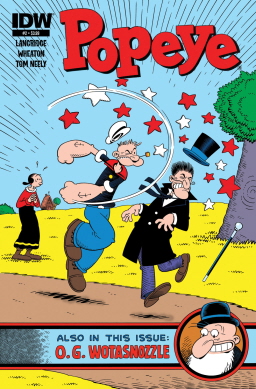 Okay. I’m fully aware that Popeye was not what you expected on a Monday morning here at your online radar for all that’s great and new in modern fantasy. But please, indulge me for a moment.

I buy comics on Saturday, on my way home from the post office. Finally finished with a busy Saturday morning packing and mailing back issues, I reward myself by browsing the stacks of new arrivals at Graham Crackers Comics in St. Charles. My point here is that, when I’m purchasing comics, I’m a bit more prone to impulse buys than I am with other forms of entertainment.

It was just such an impulse that caused me to pick up the first two issues of IDW’s new Popeye comic. Certainly it wasn’t any special affection for E.C. Segar’s character — in fact, I can’t really recall the last time I read Popeye, unless it was in the pages of Rick Norwood’s excellent Comics Revue two decades ago. Probably Bruce Ozella’s clean and dynamic art style in the first issue didn’t hurt — flipping through the pages reminded me immediately of Carl Barks and Don Rosa, and that’s a good thing.

The first issue, a 22-page epic featuring a dangerous quest to a lost island, mysterious fog, a Sea Hag, pirates, and witchcraft, reads like a Carl Barks Uncle Scrooge story too. Except here it doesn’t quite work. It’s funny, sorta, and the art is great, but the whole affair doesn’t really come off.

Fortunately, the second issue is a huge improvement. In fact, it’s a mini-masterpiece. This one is split into two tales — the first a complete farce, as Popeye discovers his girlfriend Olive Oyl is being courted by the smooth-talking Willy Wormwood. Popeye’s crazed attempts to one-up Wormwood — for example, uprooting a 100-year-old elm tree to present to Olive when Wormwood offers her flowers — reveal the essential core of his relationship with Olive. Their love and friendship, such as it is, is based almost wholly on mutual misunderstanding.

The second story, “John Sappo and Prof. O.G. Wotasnozzle and Saffer’s Wife Myrtle,” is even better. In fact, it is a small slice of genius. All three title characters live together in a small house, and all three have simple ambitions: Sappo wants to be left alone to read his paper; Myrtle wants to unceasingly nag her husband; and Prof. O.G. Wotasnozzle desires only to quietly work on his inventions and best his hated rival Prof. Finkelsnop. Naturally, only one can be satisfied at any moment. When Sappo asks Wotasnozzle for an invention that will block out his wife’s nagging, and a peeved Myrtle asks for something to nullify Sappo’s new Jar of Solitude, the result is an ever-escalating battle of invention and counter-invention that leads to hilariously catastrophic results. This is a comic that had me laughing on virtually every page.