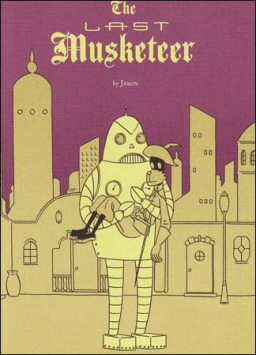 I haven’t read anything by the Norwegian cartoonist Jason before, but I’ve been intrigued for a while. So last week I ordered a copy of Isle of 100,000 Graves from Amazon.com. For a while I had The Last Musketeer in my cart as well — I didn’t know anything about it, but the cover looked cool.

Now pay attention, because this is one of the dangers of online shopping that no one talks about. I’ve never wandered by the counter at Barnes & Noble and accidentally purchased something, for example. But apparently, I forgot to take The Last Musketeer out of my cart, ’cause it showed up with the rest of my order. Whoops.

Now, Amazon has a very forgiving return policy. But to take advantage of it, you have to do stuff. Not the least of which is actually return the item in question. That’s a lot harder to do when it has both a Musketeer and a robot on the cover. You try it.

Anyway, now I have a copy of The Last Musketeer. I read it today, and quite enjoyed it.

Athos, one of the original members of Dumas’s The Three Musketeers, is living a wasted existence as a drunk and a bum in modern Paris, when the city is attacked by ‘laser blasts” originating from the planet Mars. In fine pulp fashion, Athos tracks down a pair of ray-gun toting invaders wandering the city, defeats them with his trusty rapier, and forces the surviving Martian to take him to his rocket ship, where they blast off for the alien planet (one of the running gags in the strip is that Athos has no clue what planet he’s on).

It goes without saying that the comic celebrates all the conventions of 1930s-era pulp science fiction, right down to the goofy alien costumes, stubby rockets, and giant cast-iron video screens. There’s no explanation for how an 1840s-era French Musketeer is still alive in modern Paris, and none is needed. This comic has one audience: those who want to see Athos the Musketeer battle robots on the sands of Mars. If that’s not you, don’t put it in your Amazon cart (even by accident).

But if it is you, I think you’ll have a good time. My one criticism is that the dialog seemed oddly wooden; I put the blame for that mostly on Kim Thompson’s translation. Perhaps I’ve just gotten spoiled by the elegant and frequently hilarious translations in modern manga, especially Fairy Tail and the brilliant Fullmetal Alchemist. But it seemed the crisp and subtle artwork demanded crisp and subtle dialog, and that wasn’t always the case.