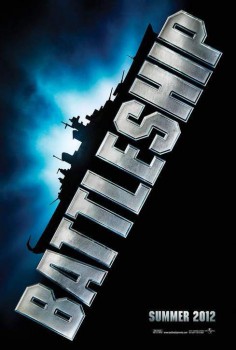 However, if I can muster up a subversive undercurrent to the movie, it rests on these aliens. They show odd behavior for extraterrestrial invaders, if that’s indeed what they are. Their massive ships only attack the naval vessels if they are struck first. The HUD displays on the aliens’ helmets show that they aren’t interested in attacking live targets if they don’t need to — they are principally interested in gathering equipment. The damage they spread through Honolulu with their buzz-drones (which, I admit, look pretty great) appears strategic, and they avoid causing civilian damage if possible, even going so far as making a display of not attacking a Little League game. At one point, the aliens stage a commando rescue to get back one of their men from captivity. For most of the movie, the aliens’ goal is to escape: with their communication ship wrecked, they need to find some way to get a message off-planet. 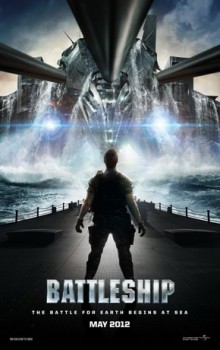 So is it possible that from the POV of the aliens, this is basically Black Hawk Down? Or the Anabasis by Xenophon? Since the purpose of the aliens coming to Earth in the first place is never stated (we only know they are reacting to a communication signal sent from Earth in 2006), it is possible that the arrival of the five ships is nothing more than an intelligence-gathering mission to make sure Earth does not pose a threat, and the ships never harbored any intention of causing harm until they got caught in a dangerous situation after their little DUI steering accident. I still insist these are pretty dumb aliens, but they may not be specifically bad aliens.

Imagining this possibility is far more entertaining than anything in the film itself. Honestly, I think this hypothesis is far-fetched and gives too much credit to a movie based on a game where two players declare coordinates to each other until someone wins. I’m just digging around to make some sense of “Fortunate Son.”

From the beginning, Battleship desperately wants to capture the boisterous, proud stupidity of a Michael Bay film — specifically Transformers, another Hasbro property. It loads up on macho-posing idiocy and characters acting in ridiculous ways that are the hallmark of Bay’s blockbuster brand. The painful opening, where Alex Hopper (Taylor Kitsch) commits multiple felonies and destroys private property so he can get a chicken burrito for a hot girl at a bar, has the movie sunk before the aliens appear.

The movie goes on its tedious way, alternating bland action sequences between the two armadas with large-scale urban destruction and terrible “character” moments. There is nothing much to say about the main stretch of the movie except it’s playbook flavorless blockbuster material: loads of visual effects and no reason to care about any of it.

If you think Liam Neeson might salvage some of this sinking regatta, I’m sorry to inform you that he appears on screen for a total of ten minutes and is completely removed from the action because he’s on the wrong side of the barrier the aliens drop around Hawaii. He doesn’t even get to shout “You sunk my battleship!” despite having ample opportunities to do so. Did the filmmakers think that among the inanity of this film, avoiding the line most associated with the game was “being subtle”? You sunk my pop culture fun.

Oh, Rihanna is in the cast. I don’t know why, because she brings nothing to her role or the movie.

An actual war hero plays a major part: Gregory T. Gadson, a U.S. Army Colonel who also works as a motivational speaker. Gadson lost both his legs to a roadside bomb in Baghdad in 2007, and now walks using next generation prosthetics technology. He doesn’t turn in a great performance as Colonel Mick Canales, an extremely embittered amputee, but he does provide sincerity that plays well, and he upstages Brooklyn Decker, who as an actress is a great fashion model. However, this section of the movie — the ground-based mission to stop the aliens from taking over communication dishes — is even duller than the naval combat. I’d prefer to see Gadson in a documentary short subject about his experience with the groundbreaking prosthetics.

Strangely, the best segment of the movie is the one that tries to adhere closest to its unlikely source material. Battleship was originally a pen-and-paper game and is basically an educated-guessing contest: not exactly the starting point for grand cinematic drama. But the movie has a section where the John Paul Jones, with its radar destroyed, uses buoys to create a grid target-system. The navy calls out co-ordinates like “A10” to try to make blind missile strikes on the alien ships. It plays far better than it sounds, and for that the credit goes to actor Tadanobu Asano, who handles the strategy as Captain Nagata. Again, why isn’t this guy the actual hero?

There are a few other hand-waves to the game, such as the peg-like weapons the aliens use to sink ships, but since Battleship is not a character-based property like other Hasbro big-leaguers G.I. Joe and Transformers, none of this means anything. The most hardcore Battleship players have never rallied for an “accurate” film presentation. (I don’t know if there are “hardcore” Battleship gamers, but assume there must be. If a game exists, it has dedicated gamers.)

The film’s climax, where Alex Hooper leads an effort to put a decommissioned World War II battleship that hasn’t sailed in ten years into play against the remaining alien vessels, asks the audience to believe so much nonsense that it might actually be entertaining — if the film wasn’t dead in the water long ago. There is something adorable about seeing aging vets get back in action, but “adorable” isn’t on my list of things to see in an action finale.

By the way, the Creedence Clearwater Revival song that should have played at the end: “It Came Out of the Sky.” Duh.

Also by the way, “Fortunate Son” is a great song. That is all.

Next week: I’ll find out if I wanted a third Men in Black film.

> I’m just digging around to make some sense of “Fortunate Son.”

Ryan, your reviews never fail to make me LOL. Nice one.

I thought the whole point of such a stupid ‘adaptation’ was to have someone shout a catch phrase everyone knows.

I’m a huge liam neason fan but i knew from day one i’d never watch this..

Anyone who goes to this because of Liam Neeson will come out of the theater very very very angry.

Anyone who goes to this because of — well, any reason — will come out of the hteater very very very angry. Or at least wishing they’d just gone to Avengers again.

Well, I finally saw BATTLESHIP. At the insistence of my two teenage sons, who I offered to take to a matinee, and who chose it over MIB III and SNOW WHITE.

And you know what? I liked it. If you’re going to see this flick, I strongly suggest you sit next to a 14-year-old boy. My youngest son loved everything about this movie, and his joy was rather infectious.

Best part for adults, I think, was the rather inscrutable nature of the aliens. Just what the heck ARE they doing? Why are they doing it? Are they forbidden from harming indigenous animal life, like horses? Or are they just saving ammo by not shooting unarmed Little League players?

They’re clearly constrained by SOME kind of code of conduct, but the exact parameters are mysterious. They even ignore Hopper’s destroyer after it’s shot on them, once it turns away to scoop Japanese sailors out of the water. Trying to figure out what that code is added an interesting dimension to a dumb action flick.

Anyway, maybe I’ve over-analyzing it. But it’s a neat testament to the power of a spare narrative.

[…] Scorecard, making it my second favorite film of the season so far after The Avengers. (Up against Battleship and Dark Shadows, admittedly…) The company can do better, but they’ve done a whole lot worse. […]

[…] Spider-Man is adequate to the task. I certainly can’t give it a worse rating than something like Battleship or Dark Shadows. It’s not a Batman and Robin. There’s […]