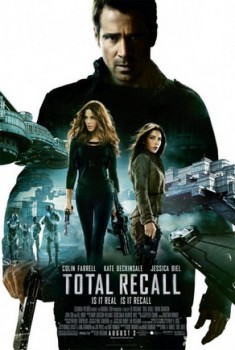 In a charming case of movie irony, the new Total Recall has already been mostly forgotten, even though it only came out on Friday. The Dark Knight Rises, in its third week, handily crushed the Len Wiseman-directed remake. I’m writing this on Tuesday, and it already feels as if the movie was never even released: it was a dream implant that never took, and the original memory of the 1990 Paul Verhoeven-Arnold Schwarzenegger Summer blockbuster has already taken back all the cerebral space. Nonetheless, I’ll still perform this brain autopsy on Total Recall ’12 to see why no one bothered to show up except for people writing reviews.

If you were to pick the right approach to remaking 1990’s Total Recall — aside from simply not remaking it all — you would want to try it “straight,” focusing in on the everyman aspect of a protagonist in a cyberpunk future who discovers that his whole life is a false memory implant, and in truth he’s a dangerous double (possibly triple) agent. It is, after all, a nifty SF-noir concept, delivered courtesy of the Philip K. Dick short story, “We Can Remember It for You Wholesale,” and refashioned into a feature film concept by Dan O’Bannon and Ronald Shusett, who also created the original screenplay for Alien.

And this re-make of Total Recall does that: it plays the movie as a straightforward science-fiction adventure film done in the current style. But… it was handed to Len Wisemen to direct. And he turned out the same film he always turns out: broadly competent but utterly dull, slick, superficial, and ultimately disposable. Producer Neil Moritz, responsible for the “Fast and Furious” franchise, should probably shoulder a good part of the blame as well, because the by-the-numbers execution here is what he does best unless he gets a director who clicks with the material.

Despite publicity hand-waving about “going back to the literary source,” this certainly isn’t a remake like the Coen Brothers’ True Grit. Len Wisemen’s Total Recall does a beat-for-beat copy of the plot of the 1990 film with a few background substitutions and a number of bizarre moments of meaningless karaoke imitations (the three-breasted prostitute, the “two weeks” lady at the security station, ripping out an implanted tracking device), but with all the fun drained from it and slathered over with the same polished SF glean seen on movies since the early 2000s. Fans of the original will find themselves bored to the point of wishing the whole thing was a memory implant gone wrong — a schizoid embolism! — and viewers who have never seen the original will yawn over watching the same old junk they’ve slogged through for years… only with even more lens flares!

Let’s talk the 1990 Total Recall for a moment, since the remake clearly can’t get past it either. Although the film was greeted with the standard critical dismissiveness toward an Arnold Schwarzenegger action vehicle at the time, it’s now a certified classic because of director Paul Verhoeven’s commitment to cartoonish gore, nutty characters, bizarre situations, corporate-targeted satire, and getting the most of out his strange leading man. Sure, “Ahhnuld” makes no real sense in the part and isn’t someone who can deliver psychological nuance, but Verhoeven sure makes the guy a blast to watch through one over-the-top action set-piece after another. Arnold could make simple gag lines like “See you at zee partee, Richtaah!” and “Consider dat a dahvorce!” into perennial quotables. Gut-bursting mutants, splitting apart fat ladies, aliens terraforming Mars in seconds, smug robot taxi drivers, eye-popping decompressions, Ronny Cox’s villain giving a Cornflakes commercial during the climax… Total Recall ’90 is one beautiful piece of odd SF silliness, and Verhoeven is in on the joke the whole way. When Verhoeven makes a bad film, he makes Showgirls. The guy does nothing normal.

There is nothing particularly noteworthy or fun about Len Wiseman’s Total Recall. The action is visual noise. The comedy lines are flat groaners. The actors feel more like stand-ins. It’s the definition of normal, the quintessence of mediocrity, the Antonio Salieri of the summer ’12. 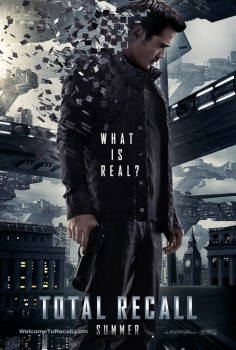 And yet this “straight” approach might have worked, and I don’t think the script (credited to John Povill and Kurt Wimmer, with uncredited work from Mark Bomback and James Vanderbilt) was what sunk the project. The Mars-less background is an intriguing one; as much as I love Mars and wish Hollywood would get over its irrational fear of the red planet, it isn’t so essential to crafting the “Who Am I?” story of Total Recall that its absence means instant death. Chemical warfare has rendered Earth in the distant future almost uninhabitable. Only two regions remain populated: Western Europe under British rule; and “the Colony,” a.k.a. Australia. The impoverished workers from the dystopian Colony shuttle daily to London through the Fall, an elevator shaft through the center of the planet.

This is a cyberpunk setting with real possibilities. Not only is the Fall a grand and crazy idea, but the revival of British imperialism with Australia as the target of their inequitable rule has nice historical echoes. A future of London vs. Sydney? I can groove with that.

But, alas, it’s all just used as a grunge-tech playground for a string of empty action sequences, all of which you’ve seen before, and done far better. The centerpiece involving the Fall would normally seem clever… except that Inception copped and perfected it two years ago in one of the new iconic action set-pieces in film. The rest of the film is hopping cars, hopping elevators, foot chases, hover-vehicle chases, none of which exceed “competent.”

No one would mistake Colin Farrell for an “everyman” as in PKD’s story, but the actor might have done something with the identity shake-up of Quaid if the movie or director had time away from production design and overseeing the second-unit to let him play with it. One of the joys of the original Total Recall was how it toyed with the idea that the whole espionage story unfolding before the audience might be the dream implanted in Quaid’s head, and then never giving a solid answer. (It was the “spinning top” question of the time.) The new movie ignores this, except where it needs to copy a scene from the original: Quaid getting caught between two characters arguing about the reality of his world. The remake uses a previously established character, Quaid’s work buddy (Andre Baugher), and manages to change a perfectly off-kilter scene from the original into business-as-usual. And that’s it for wondering if the story is a dream — because at the end of the movie, I’d rather just get out of the theater and go home than wonder if life really is a dream. 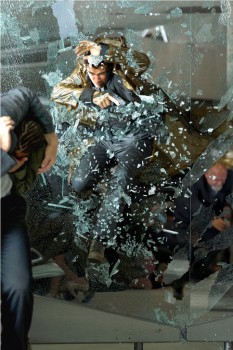 Kate Beckinsale takes the main villain part, a compressing of the character of Lori and Richter from the original. Getting rid of Richter (Michael Ironside in 1990) wasn’t a smart move, but Wiseman apparently wanted his wife Beckinsale to get the juiciest role, so the expanded Lori takes up the effort of tracking down and killing Quaid. Not only does her fury at getting Quaid not make sense, but Beckinsale isn’t a presence enough to make such an expansion work. But her opposite number, Jessica Biel’s resistance fighter Melina, is almost a non-presence, with even less chemistry with Farrell than Beckinsale has. The actresses even look and dress similar. If this was an intentional choice, it’s a terrible one, making it seem unimportant which woman Quaid is with.

With Kate Beckinsale hogging the bad guy parts, Bryan Cranston’s Cohaagen turns into a minor character, performed minorly, and equipped with a boring plan about a robot invasion of the Colony. Bill Nighy’s brief appearance as Matthias, the leader of the resistance, is a horrible waste of a major actor’s talents. Nighy is the kind of performer who might bring something offbeat to a movie that desperately needs it, but he doesn’t seem to be trying. Why wasn’t Nighy cast as Cohaagen? That might have been worth seeing. (Or maybe not, since Cohaagen is so underwritten that viewers can easily forget who he is.)

The design of the film comes from two far better Philip K. Dick adaptations, Blade Runner and Minority Report, with hefty amounts of Coruscant from the Star Wars prequels. It does look good, even if all of it is familiar, and some of the technology bits are interesting, like the “hand phone” and the concept of the Fall and its gravity shift through the core. However, it is difficult to enjoy anything the production team has done because digital lens flares flash through every other shot for no damn reason. People who complained about this in J. J. Abrams’s Star Trek should probably write apology letters to the man after seeing this.

I don’t think I’ve come across a better example of the current poor state of original film music than the comparison between today and yesterday’s Total Recall. The 1990s was a renaissance era for film scores, and Total Recall featured a great comeback score for the legendary Jerry Goldsmith; it is one of the most memorable original scores of the decade. Film music today sounds all identical, as if every composer is just stealing files from Hans Zimmer’s hard drive. Harry Gregson-Williams — appropriately a Zimmer protege — gives the new Total Recall a wall-to-wall copy of the style of Zimmer’s Batman films. It only helps increase the slick varnish of “seen it/heard it” all over the production, offering nothing new.

Damn, I just remembered there’s a re-make of another Paul Verhoeven classic coming out next year: RoboCop. And I think I just saw it.

(Please note in the ratings below that I’ve given The Dark Knight Rises, which did not receive a full review two weeks ago, an “A-”)

Next week: The hope for late summer, The Bourne Legacy

[…] with occasional appearances of higher technology. The sheen of the dystopia in the recent failed Total Recall re-make is nowhere near this Mega-City One. The location shooting in Cape Town, South Africa doesn’t look […]

[…] summer flicks from 2013 and 2012, and have only fleeting memories of many of them. (I have evidence that I watched the re-make of Total Recall, but… someone erased my actual memory.) However, Ghosts of Mars will stay as sharp as the jagged […]