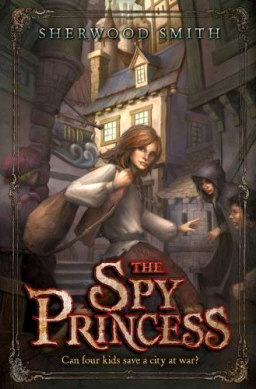 If you’re not reading Sherwood Smith, you’re missing out on one of the most gifted and versatile fantasy authors at work today.

Sherwood effortlessly transitioned to adult fantasy with the major novel Inda (2006), the first installment in an ambitious fantasy quartet which continued with The Fox (2007), King’s Shield (2008), and Treason’s Shore (2009). To science fiction fans Sherwood is the author of the beloved Exordium series, co-written with Dave Trowbridge, which began with The Phoenix in Flight (1993), as well as two novels in Andre Norton’s Solar Queen universe (co-written with Andre Norton), and two books in Norton’s Time Traders universe.

With The Spy Princess Sherwood offers up a treat for the numerous fans of her YA books: the tale of four intrepid children who are the only thing that stand between a city and destruction.

When twelve-year-old Lady Lilah decides to disguise herself and sneak out of the palace one night, she has more of an adventure than she expected — for she learns very quickly that the country is on the edge of revolution. When she sneaks back in, she learns something even more surprising: her older brother Peitar is one of the forces behind it all. The revolution happens before all of his plans are in place, and brings unexpected chaos and violence. Lilah and her friends, leaving their old lives behind, are determined to help however they can. But what can four kids do? Become spies, of course!

The Spy Princess is 400 pages in hardcover from Viking Juvenile. The hardcover is $17.99, and the digital version is $10.99. It was published on August 2.