Ten thousand gallons of virtual ink have already been spent on the subject of cliché elves’n’dwarves’n’rogues’n’rangers fantasy.  But here’s a few droplets that I think are worth noting.

Ben “Yahtzee” Croshaw, for those not fully assimilated into the etherium of the web, is a popular reviewer of games and maker of funny videos.  He’s also the author of Mogworld, which I haven’t read.  Anyway, in his recent video review of the fantasy RPG Kingdoms of Amalur, he introduces a point which he expands on in the first few paragraphs of this essay.  Why does fantasy, theoretically the genre of limitless possibilities, so often fall back on the same stock elements (elves, dwarves, pseudo-Europe, fireballs, etc.)?

Now, here’s the thing: I think Yahtzee is largely arguing against a historical problem, at least when it comes to books.  Gaming may be different, with Dragon Age, Skyrim, and World of Warcraft riding high on a post-Tolkien wave of their own.  But when it comes to books, I’m honestly not seeing much of the cliché elf and dwarf pie being produced.

There are certainly shared universes, whether they be roleplaying settings like Pathfinder or Eberron, or the enormous line of Black Library titles for Warhammer and Warhammer 40K, but they don’t make any claims to originality of setting or trapping.  Many of those books tell great stories with memorable characters, but they do so with familiar elements and surroundings, and pretend to do more.  There’s something comforting about that, actually, and I rather enjoyed the only Pathfinder novel I read.

But in the wider world of fantasy, I’m just not seeing a glut of elves and dwarves or anything that’s recognizably derived from D&D.  I’m seeing Brandon Sanderson, Jim Butcher, Brent Weeks, and  Harry Conolly, James Enge and John C. Wright and Scott Lynch.  Well, okay, Enge has dragons and dwarves, but no one would mistake Morlock’s world for Forgotten Realms.

Sanderson is in some ways the anointed heir of epic fantasy (given that he’s the man completing the Wheel of Time), but look at what he writes: In Mistbor 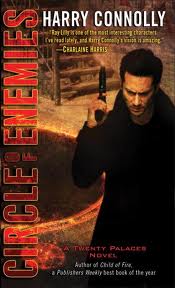 n, we’ve got a world deep into its own post-apocalypse, where ash falls from a red sky and mists rules the night, where superhuman warriors burn metal in their guts to gain powers ranging from improved strength to seeing the future, where the mandates of an immortal tyrant are enforced by hooded killers with spikes in place of eyes.  In The Way of Kings, we’ve got an entire world adapted to withstand sorcerous storms of unimaginable fury, where warriors in impenetrable armor fight with swords that cut through souls as easily as stone.

Harry Connolly, too, writes in a familiar subgenre: Urban fantasy.  But he writes it in an unfamiliar way.  After a flirtation with werewolves in the first book, he offers Wings of Air and Hunger and Claws-in-Darkness, and magic that’s as enigmatic as it is dangerous.  His unique take on the supernatural never fails to surprise me.  The books are like Jim Butcher’s Dresden Files only in that they offer similar joys.  Connolly’s creative well seems all his own.

It is, by the way, a crying shame that Connolly’s series was cancelled after the third book.  You should probably seek copies of Child of Fire, Game of Cages, and Circle of Enemies while you still have a chance.

Anyway, the upshot of it is: There’s lots of great stuff being written, by writers who do let their imaginations soar in strange and dark and wonderful new worlds, unconstrained by the artificial trappings that have come before.  May their works someday find their way into poor Yahtzee’s cold heart.

The cliche is only partly true. Most of the elves/dwarves writing stems from gaming and its derivative fiction. The rest comes from unabashed Tolkien knock-offs. Very little original fiction is written involving north European mythology. I think much of the complaining is done by the diversity police who would prefer nothing be written stemming from northern European mythology, even though east Asian myths are at least as influential in the genre today.

Bradley Beaulieu, Martha Wells, and Douglas Hulick are all writing fresh, intriguing fantasy without dwarves and elves that is worth checking out.

“May their works someday find their way into poor Yahtzee’s cold heart.”

Well, that’s the thing; despite his funny review style, Yahtzee is a narrow-minded elitist, unconcerned with whatever might appeal the mainstream (going as far as condemning it), so long as it fits his “vision of art”, be it games, books, music, etc.

While possessed of an acidic style, I’ve usually found myself agreeing “Yahtzee” Croshaw’s observations. And I agree with him here too.

He never criticizes books or movies, just the video game industry. Which is not only his area of expertise, but where his argument is strongest.

My own problem with fantasy gaming is that while there are some good alternative fantasy games (like BioShock) there are dozens of generic fantasy games like Amalur which are not only unimaginative, but long. There developer for that game boasts that there are 200 hours of game play possible. Since a lot of gamers make hours of game play a deciding factor in which game to but, you get a large number of games that feature quantity of quality.

Sean, thank you for mentioning my books. The flip side of trying to be original is that I risk not providing readers with the story elements that brought them to the genre in the first place. Sure, it’s original, but is it what readers want?

In my case, clearly not.

Thanks again. I’m glad you liked my books.

He is also a member of the Contrarian Society of False-Cosmic-Balance due to an excessive need to be ‘special.’

Take his comments in context dude.

I grew up in what was called an ‘art colony’ ( actually it was small beach town ) in the USA.

I used to write a lot when I was growing up, and I didn’t care what the Ballet people thought of my fiction/poetry shit.

I still ‘did great’ with the ‘Ballet People.’

Yahtzee is as relevant on a site focused mainly on adventure-fantasy-fiction ( not really games ) as you make him.

His points are valid in his sphere of influence; Electronic Gaming.

That’s the court you should be playing with him on.

Adventure-fantasy-fiction writers ( like of novels )shouldn’t care what Yahtzee thinks. He’s not even ‘talking’ to ‘you.’

Harry, consider it an open fan letter–I meant to write you one when I finished CIRCLE OF ENEMIES, but I couldn’t immediately turn up an e-mail address for you.

As for female authors. . .I admit that, when I look over my bookshelves, I mostly see stuff written by men. I attribute it more my own laziness than anything else. Thinking back on it, I would include Paula Volsky and Theresa Edgerton in the above list if either of them still seemed to be publishing*. Martha Wells’ books are on my list of stuff I’ve been meaning to pick up. Any recommendations?

*I think Theresa Edgerton may be self-publishing a new edition of GOBLIN MOON, but that’s for another post

For other female authors, how about P.C. Hodgell? Or Tanith Lee?

Sean, I was the same way for years; I read books by Connie Willis and all the guy writers. Once I got online I overheard (overread?) people talking about and realized I was missing out.

The results have been mixed, just as you would expect. Some female writers became favorites and some didn’t thrill me, just like the males. And my tastes are pretty specific, so de gustibus.

But I thought INDA by Sherwood Smith was very good: fat four-volume epic fantasy in omnipotent POV that was full of terrific characters.

Kate Elliott’s SPIRIT GATE was maybe a little fatter than it should have been, but the characters were vivid and wonderful. Like Smith’s books, no elves or dwarves.

I like Ellen Kushner’s books, and while I bounced off Sarah Monette’s Melusine series I loved her short story collection THE BONE KEY.

Actually, you could probably fix yourself up with a few likely winners just by going over award nomination lists, especially the Locus Awards. I don’t have much interest in awards, but it’s not a bad place to start.

And thanks for the open letter. I do appreciate it.