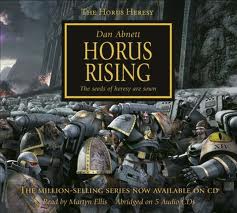 I have a 3-hour commute to my job in Champaign, Illinois, and I exhausted the excellent Dark Adventure Radio Theatre adaptations of H.P. Lovecraft’s major works months ago. What’s a bored commuter to do?

Rejoice when the latest Black Library Audio CD arrives, that’s what. I thoroughly enjoyed Nick Kyme’s Thunder From Fenris — a tale of desperate battles against a zombie plague (and worse) on a frozen planet — last year, and have been looking forward to the next release. Nothing helps the miles (and miles) of cornfields of  Illinois slip by like a fast-paced tale set in the Warhammer 40,000 universe, lemme tell you.

As entertaining as it was, Fenris was only 70 minutes, and it fit on a single CD. This week’s mail brought the much more imposing Horus Rising: a 6-hour, 5 CD audio extravaganza adapting one of the central works in the Warhammer 40K canon – the tale of the epic betrayal of the immortal Emperor by his Warmaster, Horus:

It is the 31st millennium. Under the benevolent leadership of the Immortal Emperor, the Imperium of Man has stretched out across the galaxy. It is a golden age of discovery and conquest. But now, on the eve of victory, the Emperor leaves the front lines, entrusting the great crusade to his favourite son, Horus. Promoted to Warmaster, can the idealistic Horus carry out the Emperor’s grand plan, or will this promotion sow the seeds of heresy amongst his brothers? Horus Rising is the first chapter in the epic tale of the Horus Heresy, a galactic civil war that threatened to bring about the extinction of humanity.

Abridged from the best selling novel by Dan Abnett and read by award winning star of stage and screen Martyn Eliis, Horus Rising comes to life in this almost 6 hour reading.

Six hours!  Just long enough to occupy me all the way to work, and back.  Champaign, here I come!

Please tell me you don’t make this commute EVERY DAY!

Erm, no. I usually drive down on Tuesday, and back on Wednesday, about twice a month.

Enough to listen to the entire unabridged 7-volume Harry Potter series on audiobooks last summer. I switched to CDs around about book 5… it was getting too hard to juggle 17 cassettes per book!

I read this last year for the first time. It was fantastic. I’ve since ordered the next few books in the series. Enjoy your audiobook.

Speaking of audiobooks, I’ve been downloading short stories on iTunes for when I go walking. Clarkesworld, Beneath Ceaseless Skies, and Tor.com all have audio versions of their stories.

Any plans for BG to join the fray?
Cheers,
NGD

But we don’t buy those rights from our authors, and we don’t have any way to do it (yet), even if we did. I’d want to make sure we did everything right.

And before we do serious audio productions, I want to get further underway publishing online fiction at the BG website first, as we’ve been hoping to do for a while.

Still, audio is on the list. First step is to check out that list you gave above and see how Clarkesworld, Beneath Ceaseless Skies, and Tor.com are doing things.