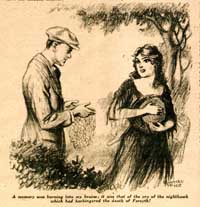 “The Cry of the Nighthawk“ was the second installment of Sax Rohmer’s Fu-Manchu and Company. The story made its debut in Collier’s on December 26, 1914 and was later edited to comprise Chapters 4-6 of the second Fu-Manchu novel, The Devil Doctor first published in 1916 in the UK by Cassell and in the US by McBride & Nast under the variant title, The Return of Dr. Fu-Manchu. 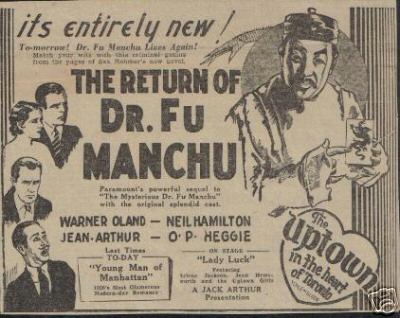 Rohmer’s tale bears definite similarities to his first Fu-Manchu story, “The Zayat Kiss” (1912) in that the story opens with Dr. Petrie at work in his principal vocation caring for a patient called Forsyth who has turned up at his residence late that evening with a badly infected hand. Petrie, in true pulp fashion, fails to recognize that Forsyth is the spitting image of Nayland Smith with a moustache.
Finished with his patient, Petrie goes to his study to find Smith with the lights out staring frantically outside just as he had at the opening of “The Zayat Kiss.” Petrie joins him and they watch poor Forsyth walk to his doom under the elms. They hasten outside after hearing the cry of a nighthawk and retrieve Forsyth’s dead body with its mutilated face. Only then does Petrie realize that Forsyth is Smith’s doppelganger and the duo then deduce that the poor man shared the fate intended for Smith. 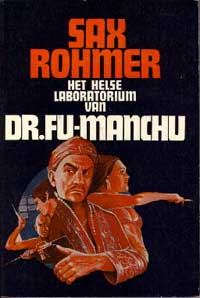 Nayland Smith examines the crime scene while Petrie examines the dead man’s fatal wounds. Petrie notes unpleasantly Smith’s cold detachment as he focuses upon the task at hand. His inhuman lack of compassion is reflected in the icy quality that his eyes take on. The description recalls the odd, birdlike opaque film that covers Dr. Fu-Manchu’s eyes in moments of concentration and, indeed, Petrie has cause to repeat the description later in the story. This is yet another way that Smith and Fu-Manchu closely mirror one another. The other way, of course, is the sublimation of all sexual desire to allow for total absorption in their respective obsessions. 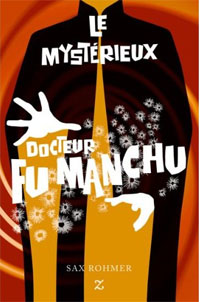 As in “The Zayat Kiss” with its echoes of “The Speckled Band,” Smith here strongly recalls Sherlock Holmes as he mystifies Watson for his request of a jug of milk, a plate of cold turbot, and a trowel and sets off for the Elms alone. As is Rohmer’s fashion, it is Petrie left alone who is in the right place at the right time for he stumbles upon Karamaneh with a small bird-catching net in the bushes.

Their exchange is classic Rohmer as Karamaneh is clueless as to how Petrie knows her identity and Petrie is convinced that she is merely pretending not to know him. He all but calls her a whore with his accusation that she leads men to their doom in exchange for the presents that Dr. Fu-Manchu lavishes upon her. Outraged, Karamaneh tears open her bodice and bares her shoulder which is covered in welts from where her master has whipped her into submission. 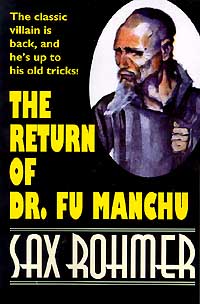 The scene is still a shocking one and Petrie (along with the reader) is completely won over to her side in that single revelation of the dark side of foreign otherness. Whether deliberate or not, Rohmer perfectly captures the sadomasochistic fantasy of rescuing and conquering the untamed Eastern girl whose passion far exceeds that of their drab, civilized Western counterparts. Smith and Petrie, by virtue of their continued association with the Orient, are themselves marked as “foreign other.” The staid life of respectable Englishmen could never satisfy them. It is a similar sentiment found in many song lyrics of the era. Exposure to a larger, more exotic world during the Great War threatened to spoil the simple comforts of home. 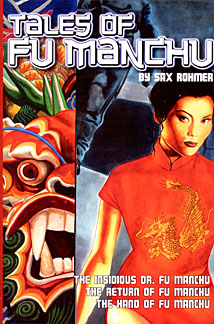 Unsurprisingly, Karamaneh gives Petrie the slip leaving Smith to condemn him as an imbecile. The resulting argument nearly destroys their lifelong friendship until Smith reveals that his hardened misogynistic attitude is the result of his having once let a woman make a fool of him (a reference to the mysterious love affair hinted at in the preceding episode). Smith declares that he has learned his lesson and compares Petrie to Adam from the Book of Genesis who will go to pieces for his foolish devotion to the fairer sex. Smith declares that not only has Petrie endangered their lives, but his action could very well mean that a “yellow” emperor sits upon the throne of the world.

It is an amazing speech if only for the fact that one cannot imagine any author making similar arguments today. Yet for all its political incorrectness, it captures the feel and foibles of the era with an honesty and zeal that still stirs emotions (although perhaps not the ones intended nearly a century ago). It is the conviction that every encounter, no matter how mundane, could mean the destruction of the British Empire and see the “white race” enslaved that lends the material its power. While Rohmer would quickly move away from such blatantly racist jingoistic commentary in later years, it was the very spirit of maintaining imperialism at all costs that propelled the Yellow Peril sub-genre for so many years.

The finale where Smith and Petrie unravel the mystery of how Forsyth was killed and the ingenious use of an everyday household cat as an instrument of death recalls the inventive use of the snake in “The Speckled Band.” Rohmer, to his credit, does more than imitate Sir Arthur Conan Doyle. Unlike Sherlock Holmes, Nayland Smith does little detecting and displays almost no deductive reasoning. Rohmer’s protagonists simply survive and, for all of Smith’s berating of Petrie’s weakness where women are concerned, sexual attraction to Eastern women is directly or indirectly responsible for their continued survival.

William Patrick Maynard was authorized to continue Sax Rohmer’s Fu Manchu thrillers beginning with The Terror of Fu Manchu (2009; Black Coat Press). A sequel, The Destiny of Fu Manchu is due for publication in December 2011. Also forthcoming is a collection of short stories featuring an original Edwardian detective, The Occult Case Book of Shankar Hardwicke and a novel featuring an original hardboiled detective called Lawhead. To see additional articles by William, visit his blog at SetiSays.blogspot.com