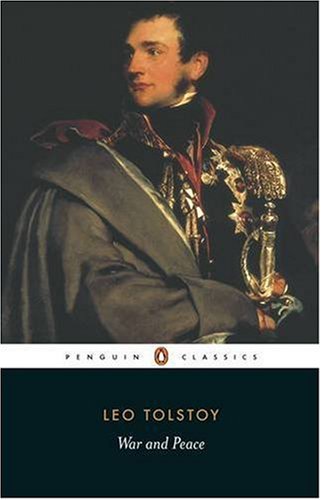 In one of my first posts here, I mentioned that I was hoping to figure out what it is, exactly, that I like about fantasy fiction; what it is I get from fantasy that I get nowhere else.

I found myself thinking about that question a fair bit over the past couple of weeks. I was reading a 1500-page novel about a world-shaking clash of armies, a prose epic whose subjects ranged from the politics of high society to battles shaped by cavalry charges, and which presented a struggle against a would-be world conqueror viewed by some as divinely gifted and by others as a Satanic force of utter chaos.

It wasn’t a fantasy, though. It was War and Peace.

I found myself fascinated by how much Tolstoy’s great novel (Tolstoy claimed the book wasn’t a novel, in a formal sense, but the term fits better than any other) looks like an epic fantasy — even while feeling like nothing of the sort. Why is that? Why is something that seems so close to fantasy in form so different in actuality?

Obviously it’s a different kind of book. Obviously Tolstoy was aiming at something — many things — quite different from an epic fantasist. But what sort of things? How do they determine the feel of the novel?

War and Peace is divided into four books, describing Russia’s involvement in the Napoleonic Wars from 1805 through to 1813, and depicting the effect of the wars on Russian society. The first book introduces many of the characters we’ll follow through the story, most of them members of the upper classes, and builds to the battle of Austerlitz, where Napoleon defeats an alliance of European and Russian forces.

The second book covers seven years; characters marry, separate, age and die — and in the background the wars continue, without Russia’s direct involvement. Books three and four describe Napoleon’s invasion of Russia in 1812, his capture of Moscow — and then an abrupt reversal of fortune, as Napoleon is driven into retreat.

So the story literally alternates between war and peace. We follow characters in battle scenes, but also watch them take part in hunting parties, or see them join the Freemasons. The inevitable progress of the conflict with Napoleon shapes the novel, but the characters are always in the foreground; we mostly experience the book through them, though the narration is relatively distant, objective — a limited omniscience. They take part in the great battles, they meet the commanders and Emperors, but they also have an importance in and of themselves.

Let me briefly lay out some of the specific similarities I find between the novel and many epic fantasies. Firstly, of course, is the theme of the great war, depicted not only in the form of set-piece battles, but also in terms of influence and corruption — Russian society at the start of the book is dominated by French culture, with many of the Russian characters speaking a better or more refined French than they do Russian. That changes over the course of the book, as the Russian language and Russian culture is asserted, and French influence expelled.

We don’t follow any French characters in the book. We’re given the Russian side of events, with some consideration from the narrator of what events signified for the French, and a few incidental points of contact between the Russians and various Frenchmen or women. The French aren’t demonised, that I noticed, but the book is at least as one-sided in its depiction of the armies as one might expect of a fantasy epic about good and evil.

Secondly, the society described is basically agricultural. We in fact get a better sense of that agricultural life than in most fantasies. While the technological level is somewhat more advanced than in the usual fantasy fiction, especially most epic fantasies, I don’t know how much difference it actually makes to the story. We’re still well before the days of rail travel or the telegraph; the presence of gunpowder has its effect, notably in the form of artillery, but not as much as you might think (especially compared to fantasy, which can include battlefield magic). Oddly, the presence of guns may be most significant in one of the peacetime sequences, when a duel results in a relatively unskillful combatant getting the upper hand on a seasoned veteran.

There’s no magic in the book, of course, but there are hints of ways in which a mystical if not magical reading of events could have been imagined. As noted, one character joins the Freemasons, and must navigate the influences of their philosophy. More than that: in the first paragraph of the novel, one character laughingly refers to Napoleon as the anti-Christ. This sets up a level of significance for the Emperor that the rest of the book seems determined to largely subvert or even ignore. 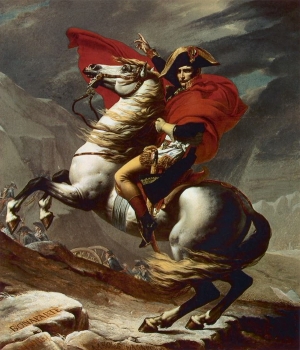 Largely, I suspect, it’s the scale of the Napoleonic conflict that makes me think of fantasy epics. These wars defined Europe for decades. The career of Napoleon, his rise and success, was like nothing since Alexander the Great (and if we squint, we can see him as something like a Dark Lord: seizing control of a revolutionary republic, conquering most of a continent, everywhere upending the way things were). For contemporaries, and even near-contemporaries like Tolstoy, the Napeolonic wars were the determining event of their times, like World War Two for us. To write about these wars was to write about the shaping of the world.

So much, then, for things that reminded me of fantasy. It all seems to me to be in the nature of the events Tolstoy was working with. In other words, he had the elements of a story that could have, handled a certain way, sat comfortably next to a fantasy epic. What he wrote was something else again.

How is it different?

I think there are three main aspects of War and Peace that separate it from something like, say, A Song of Ice and Fire. Firstly, of course, there’s the character work. I don’t mean that Tolstoy’s conception of character is more profound than you get in epic fantasy, though so far as I can see that’s the case. I mean that the way that he illustrates character is different than what you find in epic fantasy; the way characters interact, and the way they develop, are different as well. I think his conception of character is different in kind than you get in fantasy epic.

Generally characters are less dramatic in Tolstoy, and the events they’re involved with also less dramatic (or less melodramatic, if you prefer). His characters aren’t all involved in deadly political games, or threatened by assassination. They do ordinary things, and the ordinariness of their lives shapes them as much as the extraordinary does.

It’s an eye for the mundane and telling which extends even to extraordinary men. Tolstoy doesn’t hesitate to show us Napoleon, or Kutuzov, the leader of the Russian forces; they’re characters in the novel as much as anybody else. Though surrounded by power politics to a greater or lesser extent, they are at the same time simply men with a job to do.

Secondly, Tolstoy doesn’t hesitate to use the book to illustrate his philosophy of history — a very deterministic philosophy, arguing that generals and armies could not have done other than they did, however much they might have wished to. Napoleon’s invasion of Russia, and the destruction of his army in his retreat, was simply the acting-out of historical inevitability. On its own, as a philosophy, it’s almost the opposite of the typical epic story, which tends to focus on the importance of the action of certain key individuals.

But the philosophy also affects the presentation of the story. As the scale of events grows greater, Tolstoy’s narration grows more removed from the action. Certain events are shown from the perspective of characters involved in them; many more are described almost as in a history text.

Tolstoy was presenting events that he, and his audience, knew well. He wasn’t concerned with building suspense. Everybody already knew what happened to Napoleon. Tolstoy was therefore less worried about extracting drama from Napoleon’s story, and more concerned with the effect of the great events on his characters. There is no suspense about what happens in the war; its result is something that his readers live with.

Finally, Tolstoy’s story isn’t an epic fantasy because it isn’t shaped like one. The high points of the story aren’t shaped by epic events. Or, for that matter, by fantastic ones. The great events of the war shape the key moments of the book, but those moments are still fundamentally novelistic, internal and personal. A character is profoundly affected, not so much by being captured by enemy forces, but by meeting and befriending a fellow-prisoner who later dies. Another character dies, not heroically in battle, but in his home from a lingering wound; and the death is the more significant as a result. 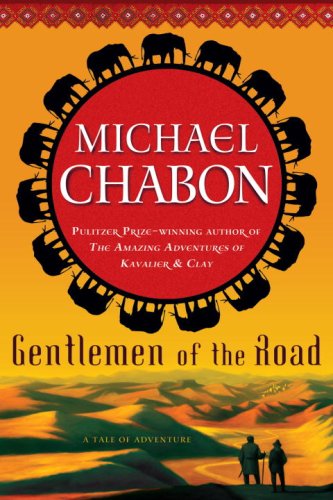 A useful comparison here might be Michael Chabon’s Gentlemen of the Road, which I thought was an interesting failure. It was a deliberate attempt to pastiche pulp adventure writers like Fritz Leiber; and I feel it failed because the main character moments and emotionally significant scenes weren’t adventure scenes. The action elements were present, and overall well-executed, but seemed like window-dressing because structurally they weren’t key to the story. It’s a very readable and entertaining book, but not entertaining (I think) in the way that Leiber or Dumas is.

The point I’m trying to get at is that you can tell what type of story you’re reading by looking at what scenes are the most important, the most powerful, the most thematically and emotionally resonant. The scenes that are important in Tolstoy aren’t the same kind of scenes as are important in Tolkien, or George R.R. Martin, or any other epic fantasist. And as a result it feels like what it is: a different kind of fiction.

As I say, it’s simply a statement of the obvious to say that War and Peace is not an epic fantasy. But the book, even while it turns away from any mythologising or aggrandising of its characters and subject, still suggests ways in which it could have been written as that kind of a tale. It would have been a different book, lacking much of what makes War and Peace a masterwork, but you can imagine some other author writing it.

The materials are there. The structure is not. The type of story is different. It’s a great accomplishment; and, if only by elimination, it’s helping me to isolate the specific power fantasy holds.

Fabulous essay, Matthew. And you managed to make me want to read WAR AND PEACE, which is a major accomplishment. 🙂

What a terrific article! Your premise is fascinating…this is an enlightening comparison of fantasy literature and “normal” literature. Both reveal aspects of human nature, but use very different strategies to do so. (In many lesser fantasies, that quality is merely a “side effect.”)

I recently completed the CHRONICLES OF THOMAS COVENANT THE UNBELEIVER by Stephen R. Donaldson, which has been called “The WAR AND PEACE of epic fantasy.” This article also sheds a new light on that. And, like John O., it makes me want to read Tolstoy.

Thank you, John and John!

I’m glad you liked the piece, and I hope Tolstoy works for you. That’s kind of the thing I find about these great canonical works of literature — there’s usually a reason why they’ve held up for so long. So if you can lock in to what that is, you can usually have a lot of fun.