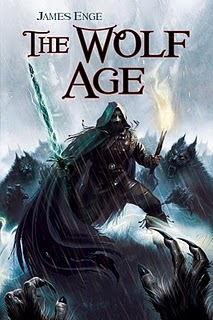 There’s a lot of great stuff to look forward to, including James Enge’s third Morlock book, The Wolf Age:

Wuruyaaria: city of werewolves, whose raiders range over the dying northlands, capturing human beings for slaves or meat. Wuruyaaria: where a lone immortal maker wages a secret war against the Strange Gods of the Coranians. Wuruyaaria: a democracy where some are more equal than others, and a faction of outcast werewolves is determined to change the balance of power in a long, bloody election year.

Their plans are laid; the challenges known; the risks accepted. But all schemes will shatter in the clash between two threats few had foreseen and none had fully understood: a monster from the north on a mission to poison the world, and a stranger from the south named Morlock Ambrosius.

Morlock first appeared in Black Gate 8, in the story “Turn Up This Crooked Way.”

Now he’s all grown up, and taking on Strange Gods in werewolf cities.  It makes us proud. 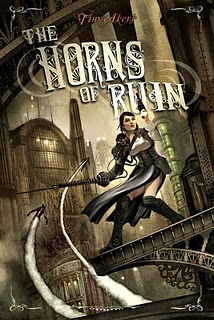 There’s plenty more on the Pyr list to command your attention, including Tim Akers’ The Horns of Ruin, which sounds very intriguing indeed:

Eva Forge is the last paladin of a dead God. Morgan, God of battle and champion of the Fraterdom, was assassinated by his jealous brother, Amon… When a series of kidnappings and murders makes it clear that someone is trying to hasten the death of the Cult of Morgan, Eva must seek out unexpected allies and unwelcome answers in the city of Ash. But will she be able to save the city from a growing conspiracy, one that reaches back to her childhood, even back to the murder of her god?

Check out all the details (and the fabulous cover art) here.

Why do people tell me these things MONTHS before they ever come out??? It’s cruel and unreasonable. I’d be just as happy if someone turned up in October and said, “Claire! Look! The new James Enge book is out!!!” And then I’d say: “GIMME! GIMME, MY PRECIOUS!!!” in a manner not unlike Sméagol to Déagol , and there may be death in a canoe, but at least I’d have a copy.

As C.S. Lewis put it so eloquently in Shadowlands, “Your suffering now is part of the joy later. That’s the deal.”

I’m pretty sure he had THE WOLF AGE in mind when he said those prophetic words.

You saw my Tolkien and you raised me a Lewis. Now who must I quote? Morticia Addams?

[…] Akers has produced some noteworthy fantasy in the past six years, including The Horns of Ruin, The Kingdom of Doors and Rooms, and The Burn Cycle (Heart of Veridon, Dead of Veridon, and the […]