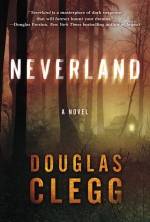 Imagine the family vacation from hell.

I know you can do that because you’ve had one, and I know you’ve had one because everybody has. Usually the “from hell” part has to do with long-term forced exposure to family members in an environment you have no hope of escaping for the duration of your tortured imprisonment (known as the “vacation”).

For me it was a remote cabin in the Canadian woods; go north, turn left at anything that looks like fun, and drive for another four hours. The location alone was the perfect setting for a knife-wielding maniac to off a few sinful teenagers including at least one cheerleader; which is probably what got me to where I am today. But enough about me…

What if your personal family vacation from hell, contained a real Hell? I mean a dictionary-definition Hell complete with a soul-eating demon? It is under this premise that we follow author Douglas Clegg into the no-Tinker-Bell, Peter Pan-less nightmare called Neverland.

Beau Jackson is destined to spend another summer with his extended family in their run-down “summer home” on Gull Island. Isolated and remote, the island is privy to even more nasty little secrets than the ones the adults spill out each evening during their alcohol-induced arguing, and Beau’s cousin Sumter is up to no good at all in that broken down shed at the back of the property.

Sumter has always been a little off, maybe even a little evil. But what he’s got hiding in a box back there is about to rip the fabric between reality and Sumter’s sadistic imagination, taking Beau and the rest of the Jackson family along for the ride.

Oh, and you think your family vacations were bad? What if your first real kiss administered by that cute, older neighbor, tasted of death and sea water?

When I recently ventured into Neverland I couldn’t put it down until I turned the last page. This made it imperative that I have a chat with Douglas Clegg and find out a little more about the man who weaves tales such as this one — as well as one of my all-time-favorites, Isis.

Here’s what I learned.

Goth Chick: The story of “Neverland” was first released in 1990, What were the factors in the decision to bring this story to a new audience 20 years later? 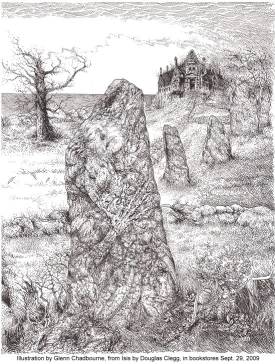 Douglas Clegg: It’s a story that readers have asked me about for years. Then, Vanguard Press fell in love with it and wanted to publish it in a major way — with advertising, publicity, all the things that it never had very early in my career. When the book first came out, it was released in a fairly quiet, small way. I think Vanguard Press — and the Perseus Publishing Group — have given Neverland a great shot with one of the most beautifully-designed trade paperback editions I’ve ever seen for any novel.

They got what was special about Neverland – as a story — and they created a look and feel for the book that created a mood for the reader, too. Also, the addition of the atmospheric, haunting illustrations by Glenn Chadbourne also bring a new life into the story.

[GC note: this is the same chap who did such an amazing job with the ink sketches for Isis.]

As trade paperbacks go, it’s a very collectible keeper of a book, physically.

GC: Can you give us an inkling about what you’re currently working on? And if so, what was the inspiration for your current endeavor?

DC: I’m working on a few things. As I focus on one of them, I ignore the others and let them incubate a bit. I’m working on a fantasy novel, but I’m in the structuring stage with it. But I’ve also been slowly working on a fairly complex novel about a family and murder and college boys in love with a girl but also on the edge of criminal behavior. That one is about 60% finished.

But I’ve also been revising a recent short novel for publication as a limited edition hardcover.

The inspiration for me — always — is marrying my subconscious with conscious thought and doing what I can to bring it to life in the form of a story. I’m constantly learning more about story and what it is — that’s where the joy of writing comes for me. Most of my work comes directly from experiences and observations. The art of fiction is finding the essence of those experiences, structuring them in a dramatic way, and then having those moments of inspiration which take it to a deeper level than simply form and structure. 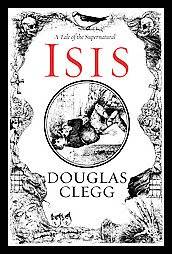 GC: In my humble opinion, if Tim Burton optioned the rights to Isis, I’d be first in line. Can we look forward to any of your stories coming to the big screen in the future?

DC: I think it would definitely take a visionary director to bring these books to life. Isis has gotten some attention in Hollywood, so it’ll be interesting if it gets picked up. I think it would make a movie that could be taken in various directions.

Neverland would also make a good movie — the terrors and mishaps of childhood are always a rich area for movies from Atonement to The Go-Between to The Other to The Village of the Damned, among many others.

So there you have it and many thanks to Douglas Clegg for taking the time to share the information. Neverland was released on April 13th in a beautifully illustrated trade paperback. I recommend you get through it before any upcoming summer outings with your family. It will certainly help put things in perspective.

Oh — the boys at Midnight Syndicate are being a bunch of teases by releasing their first ever music video to the orchestration Dark Legacy, which contains footage from their upcoming summer movie release The Dead Matter. Watch the creepy fun here and keep your eyes peeled for the sneak movie peeks. I for one cannot wait!