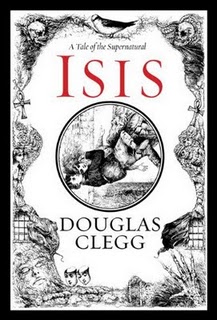 Don’t talk to a wolf in your Grandma’s nighty, don’t take an apple from a creepy old lady and when in doubt, trust the house mice.

These are the very important lessons taught to us by fairytales, normally animated by Walt Disney and all with happy endings. However, when you read Isis, you’ll learn one more bit of indispensable wisdom: sometimes dead is better, and knowledge can come too late for a happy ending.

This seems to be the year for returning to old-fashioned scares, the kind that get into your head, and Douglas Clegg has done a masterful job at taking the horror story back to the campfire, or in this case, the Victorian mansion. Isis is the story of what appears to be, on the surface, a perfect and wealthy 19th century British family complete with doting mother, war-hero father, and precocious but loving children tended to by domestic servants. Belerion Hall is not a frightening but instead postcard-like stone manor house surrounded by lush gardens in which Iris and her beloved brother Harvey pass enchanted, summer afternoons.

However, things are never quite as they appear.

For instance, Iris’ father spends increasingly long months away on “business” while Iris’ once lively and beautiful mother descends into isolation and hopelessness. And then there’s the family tombs on the edge of the property which “Old Marsh” the gardener warns Iris to avoid at all costs lest she awaken “those who listen to oaths and vows.” But when death comes to Belerion Hall, what lengths will Iris go to in order to restore her deteriorating Eden, and what horrors will that action bring out of the ground?

Isis is a mere 113 pages but Douglas Clegg, assisted splendidly by the amazing illustrations of Glenn Chadbourne, paints such a lush yet grotesque story that it is utterly mesmerizing and at the same time complete in a way you wouldn’t think possible for such a brief work. It is a tale to relate on Halloween around a bonfire with apple cider, or Christmas Eve right after the ghost of Marley exits the room. Or better still, for no particular occasion at all except that it will need to be nightfall and chilly, and you’ll need to be in the mind to tell a tale whose moral is “Death has a price and all who bargain with the dead must pay it.”

Goth Chick Update: I figured the next stop for Isis is the big screen, with Tim Burton directing, so I went searching the Internet. There’s no word yet as to whether Douglas Clegg has sold the movie rights but I did find an entertaining video preview of the book. A story like this one is screaming (literally) to be adapted for film but until Tim Burton frees up, enjoy!

[…] find out a little more about the man who weaves tales such as this one — as well as one of my all-time-favorites, […]