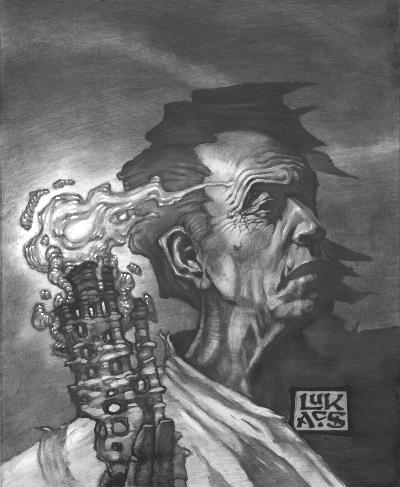 When the thief’s trail took him as far as the winterwood, as he had known it must, Morlock Ambrosius sat down to think. To enter there was to gamble with his life, and Morlock hated gambling: it was wasteful and he was thrifty — some said cheap. Still, there was the book…

He had awakened that morning in his roadside camp to find that his pack had been slit during the night and a book stolen. He had written it himself in the profoundly subtle “palindromic” script of ancient Ontil. Each page was a mirror-image of the one it faced; both pages had to be inscribed simultaneously. There was a page for each of the four hundred days of the year, and one for each day of the “counter-year” which runs backward as time moves forward.

Although the book was valuable (it was useful for reading the future or the past; merely to possess it sometimes gave one clairvoyant experiences) the loss as such did not concern him. But: he had made it; he felt responsible for it, and how it might be used.

And then there was the note.

It had been staked to the ground, just next to his slit pack… staked with a glass thorn from the same pack. (The chamber of the thorn was broken and the face inside was dark and lifeless. Another score to settle!) The message was simply a stylized figure of a hand with the fingers pointing northward… towards the forest of Tychar, the winterwood. The meaning was as clear as the slap in the face the symbol represented: Forget your book. It’s gone where you can’t follow. The note was addressed “Ambrosius.”

As he sat, pondering the dark blue trunks of the winterwood, he found the desire had not faded.

He kindled a fire with the Pursuer instrumentality. As he was waiting for it to grow to optimal strength, he took off his pack and set about repairing the slit. There was a patch of gripgrass not far away; he spotted it by the long deerlike bones of an animal it had killed. He drew a few plants from the ground, taking care not to break the stems or tear the central roots. He sewed up the slit in his pack, carefully weaving the gripgrass plants into the seam.

The fire was high enough, then, so he took the thief’s note and burned it in the Pursuer fire with a pinch of chevetra leaf. The smoke traveled north and east, against the wind, towards the forest: that was the way the thief had gone.

They called it “the winterwood.” The trees stood on high rocky ground; it was cold there, even in summer. The trees there, of a kind that grew nowhere else, flowered in fall and faded in spring. They resembled dark oaks, except their leaves were a dim blue, and their bark had a bluish cast.

Just now it was early spring; patches of snow lay, like chewed crusts, beneath the hungry looking trees. The leaves, crooked blue veins showing along the withered gray surfaces, were like the hands of dying men. They rustled irritably in the chill persistent breeze, as if impatient to meet and merge with the earth.

Morlock did not share their impatience. When he saw the smoke from his magical fire enter the tree-shadowed arch of a pathway (a clear path leading deep into those untraveled woods) he shook his head suspiciously.

So he sat down again and took off his shoes. After writing his name and a few other words on the heel of his left shoe, he trimmed a strip of leather from the sole and tied it around his bare left foot at the arch. He did the same with the other shoe (and foot). He muttered a few more words (familiar to those-who-know). Then he picked up the shoes, one in each hand, and tossed them onto the path. They landed, side by side, toes forward, about two paces distant.

He stood up and moved his feet experimentally. The empty shoes mimicked the motion of his feet. He stepped forward onto the path; the shoes politely maintained the two-pace distance, hopping ahead of him step by step. Morlock nodded, content. Then he strapped his backpack to his slightly crooked shoulders and walked, barefoot, into the deadly woods.

Morlock first became aware of the trap through a sensation of walking on air.

He stopped in his tracks and looked at his shoes. They stood on an ordinary stretch of path, dry earth speckled with small sharp stones. But just in front of his bare feet he saw a dark shoe-shaped patch of nothingness.

Morlock nodded and scraped his right foot on the path; the right shoe mimicked it, brushing away a paper-thin surface of earth suspended in the air, revealing the nothingness beneath.

“Well-made,” Morlock the Maker conceded. No doubt the pit beneath the path concealed some deadly thing – that was rather crude. But Morlock liked the sheet of earth hanging in the air, and would have liked to know how it was done.

Carefully approaching the verge of the pit, he peered through the empty footprint. The pit was about twice as deep as Morlock was tall. At its bottom was a fire-breathing serpent with vestigial wings, perhaps as long as the pit was deep. The serpent wore a metal collar, apparently bolted to its spine; the collar was fastened to a chain anchored to the sheer stone wall of the pit. The serpent, seeing Morlock, roared its rage and disappointment.

“I set myself,” the worm sneered. “This chain is a clever ruse to deceive the unwary.”

“I have gold,” Morlock observed.

The serpent fell quiet. Its red-slotted eyes took on a greenish tint.

Morlock reached into his pocket and brought forth a single coin. He swept away the dirt hanging in the air and held the coin out for the serpent to see.

It saw. Its tongue flickered desperately in and out. Finally it said, “Very well. Throw me the coin.”

Morlock dropped the gold disc into the pit. “Tell me now.”

The serpent roared in triumph, “I tell you nothing! Only a fool gives gold for nothing. Go away, fool.”

Morlock patiently reached back into his pack and brought forth a handful of gold coins. He knew the breed.

Silence fell like a thunderbolt. Morlock held the gold coins out and let the serpent stare at them through his fingers.

“It was a magician from beyond the Sea of Worlds,” the serpent replied, too readily. “He said I could eat your flesh, but must leave the bones. I said I would break the bones and eat the marrow, and no power in the world could stop me. He called me a bold worm, strong and logical. He agreed about the bones. Then he rode away on a horse as tall as a tree.”

Morlock allowed a single coin to fall into the pit.

“More!” The word rose on a tongue of flame through the mist of venom blanketing the serpent.

“I will give you two more. For the truth.”

“It was a Master Dragon of the Blackthorn Range. He — ”

Morlock snapped the fingers of his left hand twice. The two coins that had fallen into the pit rose glittering out of the cloud of venom and landed on his outstretched palm.

“Liar,” Morlock replied. In the language they were speaking it was the same word.

There was a long silence, broken by the serpent’s roar of defeat. “I don’t know who he was! He came on me while I was asleep. I didn’t wake up until he drove this bolt into my neck. Take your gold and go!”

“What did he look like?” Morlock demanded. “Describe him.”

“Describe him! Describe him!” the serpent hissed despairingly. “He was no different from you.”

Morlock shrugged. He’d met serpents better able to distinguish between human beings. But he had never supposed his interlocutor a genius among worms. He opened both his hands and scattered gold into the pit.

As he rose to go the serpent called, “Wait!”

“Must I be more explicit? I was promised a meal, yourself, if I permitted myself to be staked in this pit. I am staked in this pit, and have been denied the meal by the most offensive sort of trickery. You are the responsible party, and your double obligation is clear. I ask only that you remove any buckles or metal objects you may have about your person, for I have a bad tooth — ”

“Be reasonable. I won’t eat you all at once,” the serpent offered hopefully.

Morlock shook his head, declining this reasonable offer. “Nevertheless,” he added slowly (for it occurred to him this creature would certainly die if it remained staked in the pit), “I will set you free for some slight charge. Perhaps a single gold coin.”

There was a pause as the worm struggled between the prospect of certain death or the loss of any part of its new wealth. “Never!” it snarled at last.

Morlock walked away. The worm’s voice followed him, carrying threats and abuse, but never an offer to change. Morlock ignored it and presently it ceased.

The path came to an end just beyond the pit. This left him at something of a loss as to where to go next, but there was one good thing about it: he could put his shoes back on.

He sat down and tugged the leather strips from his dusty feet, breaking the spell. He heard footsteps and looked up to see his shoes running away into the dense bluish woods.

Morlock was aghast. Some spirit or invisible creature had clearly stepped into his shoes as they preceded him down the path. When the spell was broken they had stolen the shoes.

He had to recover those shoes. He had made them with his own hands; he had worn them for months; he had written his own name and other magical words on them. He would never be safe if he did not recover them.

Leaping to his feet, he heard footsteps crackling eastward through the bluegreen underbrush. Heedlessly he followed them.

The complete version of “Turn Up This Crooked Way” appears in Black Gate 8.

12 thoughts on “Fiction Excerpt: “Turn Up This Crooked Way””