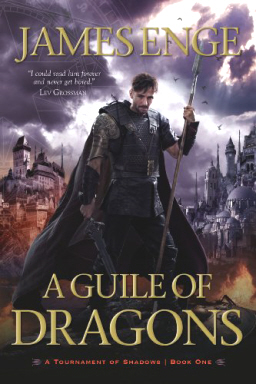 The official on-sale date isn’t until August 24, but I’ve now received multiple reports that James Enge’s A Guile of Dragons has arrived in stores. It’s also available for purchase online. We can’t postpone the party any longer.

James Enge’s first published story “Turn Up This Crooked Way” — the tale that introduced Morlock the Maker to the world — was in Black Gate 8. Morlock appeared in virtually every issue of Black Gate for the next five years; his last appearance was the novella “Destroyer” in BG 14.

James’ first Morlock novel, Blood of Ambrose, was nominated for the World Fantasy Award in 2010. It was followed by This Crooked Way, which collected a dozen short stories, including all six published in Black Gate, and The Wolf Age. A Guile of Dragons is the fourth in the series, and the first new Morlock book in almost two years. As we reported back in February, it is Morlock’s origin story:

Before history began, the dwarves of Thrymhaiam fought against the dragons as the Longest War raged in the deep roads beneath the Northhold. Now the dragons have returned, allied with the dead kings of Cor and backed by the masked gods of Fate and Chaos.

The dwarves are cut off from the Graith of Guardians in the south. Their defenders are taken prisoner or corrupted by dragonspells. The weight of guarding the Northhold now rests on the crooked shoulders of a traitor’s son, Morlock syr Theorn (also called Ambrosius).

But his wounded mind has learned a dark secret in the hidden ways under the mountains. Regin and Fafnir were brothers, and the Longest War can never be over…

The gorgeous cover is by Steve Stone. Click on the image at right to see the complete wrap-around image in HD.

A Guile of Dragons is 320 pages in trade paperback, published by Pyr Books. It is $17.95, and has an official on-sale date of August 24. But if you find it for sale and whisk it home before then, we won’t tell anyone.

A new RA Salvatore book and a Morlock novels all in one month! It’s a good thing Bones of the old ones didnt come out this month or I would have been overwhelmed.

Thanks for the early update I went and picked up a copy.

Glad to hear it, Glenn. Drop by here to let us know what you think.

I will for sure! i’m already halfway through. I’ve been thinking about Enge’s writing style and how original it is. maybe i’ll be able to organize my thoughts about it.

It was nice that we get to see a side of Morlock before he older and set in his ways. He has more character developement in this book than he did in all of the three previous books combined. (not that thats a bad thing i like that his attitude was almost constant before this book.)I can’t wait till the second book is out. Does that have a release date yet?

I’ve also been thinking about Enge’s writing style. I can’t figure out the one exact thing that sets it apart but I think its how well he does his characters is what makes his writing so good. I mean if you break it down the world isn’t that extensive nor is it broken down into great detail. You would think that would hurt the overall plot, but it doesn’t.

and something else, there is a lot of banter in his writing. I’ve read a couple of authors who have their characters banter in their books and i find it annoying in a sense that it pulls me out of the story, not so with James.

There are alot of cliches in this series, dwarves, wizards, Arthurian legends but none of it feels like anything you’ve seen before.

I feel bad for his publicists because its difficult to pin these books down to a certain sub genre. One of the comments of praise for enge on the back of A Guile of Dragons is “What Tolkien might have written had he lived in this postmodern age.” I feel bad for this statement if i had bought his book and read that comment and expected a tolkien type fantasy i would have been disappointed. I love Tolkien as much as the next raving fan but this isn’t even close. Enge is just a hard one to pin down.

If you break the Morlock series down into its parts it is littered with stuff i don’t usually like in my fantasy reading but some how James Enge pulls it all together into something original that i really love.

well sorry for a post that is cluttered with banter. I’m not a writing and never claim to be.

Thanks for the detailed review!

The next novel in the series doesn’t have a release date (yet). But as soon as it does, we’ll announce it here.

[…] book continues the origin story of Morlock Ambrosius, which began in A Guile of Dragons (Pyr, August 2012). Have I ever mentioned that Morlock’s first appearance was in Black Gate […]

[…] final version is gorgeous. A Tournament of Shadows is Morlock’s origin story, and it began in A Guile of Dragons — which Grasping for the Wind described as “What Tolkien might have written, had he […]

[…] is the third volume of A Tournament of Shadows, the origin story of Morlock Ambrosius. It follows A Guile of Dragons (2012) and Wrath-Bearing Tree (2013). James’s tales of Morlock first appeared in Black […]