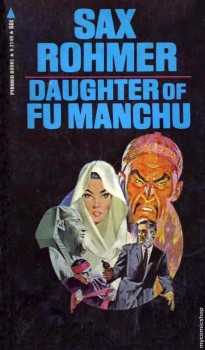 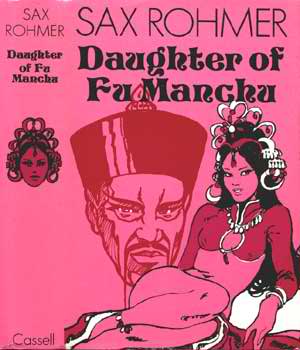 Sax Rohmer’s Daughter of Fu Manchu was originally serialized as Fu Manchu’s Daughter in twelve weekly installments of Collier’s from March 8 to May 24, 1930. It was published in book form the following year by Cassell in the UK and Doubleday in the US. Rohmer divides the novel into four sections comprising three chapters each. This week we examine the second part.

Rohmer slows his pace to take time to develop the character of Rima Barton at the outset of the second part. The reader begins to understand her as one of Rohmer’s typically strong female characters in contrast with the shrinking violets one is accustomed to in fiction of the day. The strained relationship between Rima and Shan Greville is revealed to be rooted in jealousy over his attraction to Madame Ingomar, the exotic foreign woman who had likewise stirred Sir Lionel’s passions. 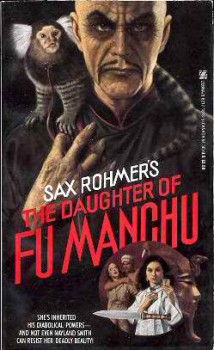 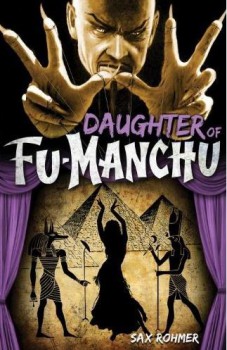 The choice of Greville as narrator is refreshing and allows the reader to view Dr. Petrie’s resurrection of Sir Lionel from the dead with a genuine sense of wonder. The Arabs among the team at the dig view Barton’s revivification as black magic while Greville begins to appreciate the genius of Dr. Fu Manchu once he sees proof that Barton was not dead, but only subjected to a drug-induced cataleptic state until he was injected with the antidote.

Petrie longs for Nayland Smith’s guidance and the reader learns that it has only been five years since Sir Denis has given up his colonial post in Burma to take a position as a department head at Scotland Yard. Rohmer wastes no time painting Madame Ingomar as a villainess somehow connected to Dr. Fu Manchu. It is a refreshing change to note that while the Arab photographed with Madame Ingomar (the same man who was trailing Greville at the start of the book) is portrayed as a menacing figure; the other Arabs are depicted as possessing great integrity. From that perspective, the softening view of what once would have been written off as “foreign devils” makes it imperative that Smith be removed from a colonial background and placed in the more traditional British detective role that Weymouth once occupied. Rohmer is less concerned with xenophobic fears than he is creating a believable international conspiracy. This transition away from Yellow Peril to New World Order will grow stronger with subsequent books. 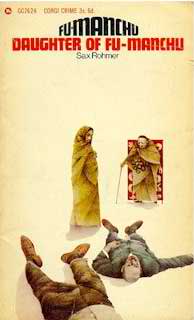 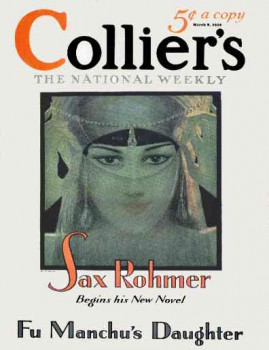 As Rima and Shan share notes with one another about their suspicions, Rima identifies the mysterious Arab as the servant of a diplomat, Mr. Fletcher sequestered at a nearby hotel. Petrie and Greville pay a visit to Mr. Fletcher in short order. Greville is flabbergasted to learn the menacing Arab who was trailing him is none other than Sir Denis Nayland Smith in disguise! Mr. Fletcher is actually Inspector Fletcher of Scotland Yard (the same Sergeant Fletcher who appeared in the earlier books). Smith identifies Madame Ingomar as Fah lo Suee, a name unfamiliar to Petrie until Smith informs him that she is none other than the daughter of Fu Manchu, whom they encountered a dozen years or so earlier when she was posing as Our Lady of the Si-Fan.

Smith proceeds to relate how he came to be on Fah lo Suee’s trail and learned that Sir Lionel had fallen into their clutches because his expertise was required in excavating Lafleur’s Shaft. Smith, disguised as an Arab, succeeded in trailing Fah lo Suee and the dacoits when they bore Sir Lionel to the site of the dig. While Smith is unaware of what they discovered there, he did learn that their base of operations is located at el-Kharga. Smith, Petrie, Weymouth, and Greville prepare themselves for a daring raid on the enemy’s headquarters. 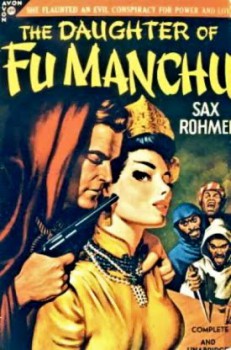 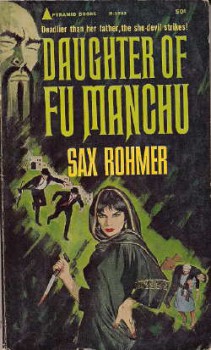 The desert raid is as effective as any of Rohmer’s similar scenes in Limehouse in the original series. While approaching the home of Sheikh Ismail, they are spotted by an Arab who releases a carrier pigeon from a box. No one has any doubt the bird is winging its way to el-Kharga with news of their approach, thereby removing any element of surprise. Upon their arrival, they spy a cosmopolitan group gathering for a meeting. Sir Denis is shaken to realize that the crowd of phansigars, thuggees, and dacoits suggests that the Si-Fan has been reformed.

Smith gives Greville (and any new readers) a crash course on the Si-Fan, the Council of Seven, and Dr. Fu Manchu’s ambition for world domination. Greville is shocked when Smith tells him that whatever was buried at the Tomb of the Black Ape has somehow summoned the Council of Seven to reconvene for the first time in over a dozen years.

The episode concludes as Smith, Petrie, Weymouth, and Greville overpower several of the attendees and prepare to infiltrate the council in their garb. Rohmer brilliantly succeeds in updating the series’ formula and transplanting the setting from London to Egypt. Halfway through the book, Shan Greville and the reader are eager to learn the nature of the threat posed by this sinister secret society whose tentacles reach to every corner of the globe. Next week, we will measure Rohmer’s success when we examine the penultimate installment of Daughter of Fu Manchu.