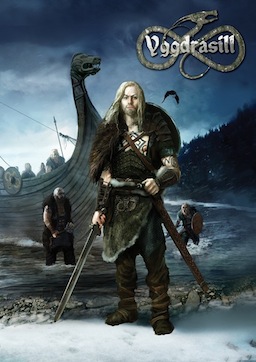 Routine visitors to this site might remember my survey of Poul Anderson’s works, a regular column that has been on indefinite hiatus for about two years now. Causes for this suspension have been 1. Anderson’s two-book Operation Chaos was an absolute drudge of a read, requiring a recovery period that only now might be over, 2. New responsibilities at home decreased available time for my recreational pursuits, 3. The time share for these recreational pursuits was almost wholly dominated by my weekly Pathfinder campaign, a campaign that now finally might be coming to an end.

It’s unlikely that, with increased time, though, I’ll be returning to the Anderson survey. This is because I’ll move onto running other games, one of which already is underway: Yggdrasill.

At first glance Yggdrasill caters to a niche crowd, and I’m certainly a member of that company. I am a Norse-phile. Within my close community, I am nearly alone in my passionate interest — but for one dear friend, who identifies as Norse neopagan. When I first learned about the game just over a month ago, I knew that this “blood brother” would play the game with me. I also guessed that some others in my community would try it out, as well, and they have.

But as I consider just how many other areas of the globe might have the dynamic of interest that I enjoy, I question how viable a business project Yggdrasill might be. Perhaps I shouldn’t: Vikings appears to be a popular TV show; perhaps that series inspired some gamers to go “full Viking.” The “northern thing” clearly is a mainstay of traditional fantasy gaming, an aspect derived from popular fantasy fiction. But in most games where efforts are made to make the northern atmosphere “authentic” — well, they’re not actually “games,” per se, so much as they are campaign settings and supplements, productions such as Lands of the Linnorm Kings in Pathfinder’s Inner Sea setting for Golarion, and The Northlands Saga in Frog God’s Lost Lands setting, and both of these properties actually are about single regions within much larger campaign settings. But with Yggdrasill the northern thing is the whole thing, and that’s catering to a specific taste indeed!