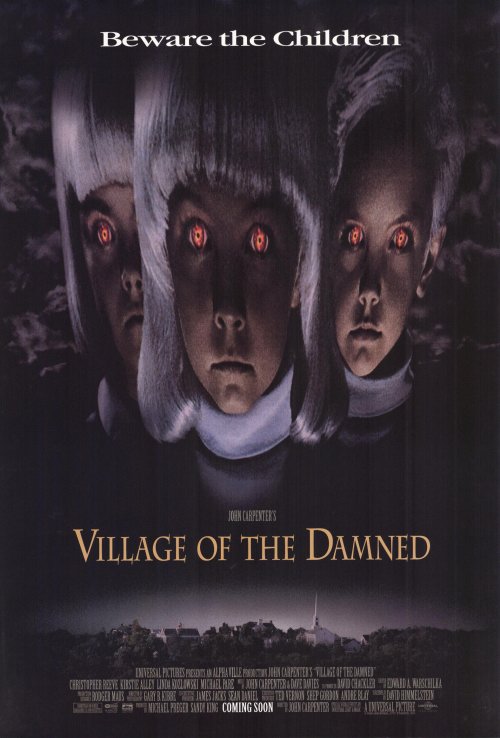 Here’s a crossover I want to see in a comic: Superman vs. The Village of the Damned. I just thought of that as I sat down to write because Christopher Reeve is in this movie. Hey DC, you’re welcome! You need all the help you can get.

Village of the Damned came about when Carpenter and his producer Sandy King (whom he married in 1990) signed a contract with Universal and tried to set up a Creature From the Black Lagoon remake. When project planning bogged down, Tom Pollock at Universal handed Carpenter a script for a remake of the 1960 British SF/horror picture Village of the Damned (based on the novel The Midwich Cuckoos by John Wyndham) and asked the director if he’d make this before continuing with Creature. Carpenter agreed to do it as part of his contract.

Village of the Damned was a commercial failure when released in April 1995 after Universal rushed its release schedule. The Creature From the Black Lagoon remake never got the greenlight from the studio and faded away. So rather than getting a John Carpenter remake he was passionate about, sort of a follow-up to The Thing, we got a John Carpenter remake he was just trying to get out of the way.

A bizarre phenomenon strikes the Northern California town of Midwich: for six hours, every person and animal in the town and surrounding countryside falls unconscious. Pretty weird. But weirder is that a month later local doctor Alan Chaffee (Christopher Reeve) finds out that ten Midwich women are pregnant — and the conception date is the day of the blackouts. Dr. Susan Verner (Kirstie Alley), an epidemiologist studying the occurrence for the US government, offers financial incentives for the pregnant women to carry their children to term so the offspring can be studied.