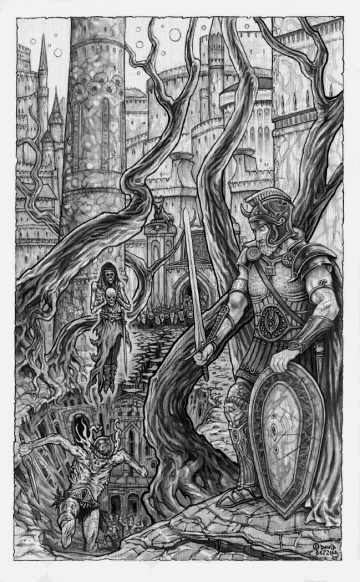 So Isrohim Vey wandered the wide world. He had to fight, often, either to earn his way or simply to survive the bad bandit-haunted roads between cities and fortresses. Sometimes men sought him out to fight him and take his sword. Sometimes, before he killed them, they mentioned that they had been sent by Nimsza, a Bishop of the Empire Church.

Eventually Isrohim Vey went to the land of Marás, where, in the nave of the Obsidian Cathedral, he slew the Black Bishop called Nimsza; and, taking up Nimsza’s ring, spoke with the demon Gorias that Nimsza had commanded in life.

“It may be true,” Gorias purred, “that demons know something of the ways of angels.” Gorias held Nimsza’s soul between its claws, and was content.

“Tell me of the Angel of Death,” said Isrohim Vey.

“I do not want to evade the Angel,” said Isrohim Vey. “I want to find him.”

“It is, of course, an error to refer to an angel or demon as male or female,” observed Gorias thoughtfully. The soul it held wailed a tiny shriek that never ended nor wavered. “However, language on these planes is crude, and incapable of suggesting our essence. I will tell you this: understanding of the Death Angel will come with the right death, when the world turns upside down.”

“I cannot. My understanding is not as yours, filtered through reason. Like angels, demons know only what they know. Order me to come with you, if you like. Command me to aid you. With your nameless sword, and my aid, you can become the conqueror that the Black Bishop dreamed of becoming. We will topple empires and you will crush the nations of the world beneath your boots. I have power to do that.”

“Otherwise, pain will come to you. Through me the way to a life of ease. You have the ring that is my weakness; command me.”

“I can give you to Azrael,” said Gorias. Isrohim Vey said nothing. “You will know the smile you seek,” said the demon. “Command me.”

“Then you will have my soul,” said Isrohim Vey.

“But you will have your angel,” said the demon Gorias.

“I will say this to you,” said Isrohim Vey, and spoke the Word of Azrael.

Gorias shrieked and fled to the thirteen hells.

Theologians have since debated the fate of Nimsza’s soul. As is the case with most souls, however, its destiny remains unclear.

Excommunicated by the Empire Church for slaying the Black Bishop, Isrohim Vey travelled to the Valley of Rhûn that had been the heart of the Dominion of the Lohr when that mighty and cunning people had ruled half a continent. Centuries before the Valley of Rhûn had been overrun by goblinkin who had come in a swarm out of the north; the Lohr now were gone, and the goblins warred with each other among the ruins.

In the fallen Lohr capital of Opallios Isrohim Vey found libraries of ancient unreadable script guarded by Ylvain warring against the goblinkin, and small gargoyles who glared after him with garnet eyes and bellowed out proclamations of might, and carrion birds with old-man’s heads, and a kind of large bone-white spider which seemed clever in the way that foxes are clever and which wove webs that wailed gently in the wind. He also found wands of light and darkness, and bell-shaped diamonds holding frozen songs, and a whip that commanded the flood and the eclipse, and the ashes of a book which had held the Seven Secret Words to Command Love and War, and, finally, ghosts.

He spoke to the ghosts one by one in the broken streets and other places, saying “I seek the Angel Azrael.” And none of them had intelligence of the angel to give him.

Some said to him “Be happy and do not drive yourself through the warm life with your eyes upon the next.”

He found sometimes ruins of the temples of the twelve gods of the Lohr and the God of All Other Things. In these places the ghosts of priests served the ghosts of gods, and Isrohim Vey spoke to them.

A priest of Ikeni, goddess of Names, said this to him: “Your name is Isrohim Vey, and your sword has no name. Your identity is this: like any seeker of any kind, you are what you look for. To find it will be to destroy yourself.”

“The sword has a name,” said Isrohim Vey. “It is called Azrael’s Word.” And he left Opallios.

Sometime after, the excommunicate Isrohim Vey was seen in the castle-city of Tíranin, which is the capital of Yriadriú the First Empire.

Tíranin is very old, and no one now remembers whether it began as a castle which grew into a city, or as a city which built itself up into a single castle. Isrohim Vey was soon known and feared in the great halls that house bardic contests, in the hole-in-the-wall taverns, in the sordid side passages where thieves swindle each other and whores keep appointments in rooms filled by the rat-gnawed finery of long-gone dynasties. There is very much dust, everywhere in Tíranin.

Isrohim Vey, soon after his arrival, became involved in a labyrinthine conspiracy against the ruling line of Yriadriú. By the time events worked themselves into History’s chosen pattern, five towers were set afire, the Bronze Duke committed suicide, a hatmaker who ran a shop on a high balcony near Parliament Keep had an emerald pin stolen, Queen Jael met her own reflection walking in a chapel maze, a brief but violent battle flared among the Dominies of the High Thaumaturgical Council, an enslaved unicorn was freed from the flesh-marts, Isrohim Vey changed sides, the strange secret of the Leader of the Parliamentary Opposition was revealed, and a mad priest who worshipped the Red Gods of a people long thought extinct raised a forest of oaks to crack the stones of Tíranin, and in so doing revealed an army of ghouls lurking in old secret places within the walls preparing to fall upon the living who were their descendants.
In the end, it was Isrohim Vey who led the search for the Hidden Necropolis, and then led the battle against the Ghoul Lords in their tombs. Finally, facing over the point of his sword the King-That-Was-And-Would-Be-Again, Isrohim Vey heard the name of the Angel of Death once more.

“I know,” said the dead King, “that you came to Tíranin seeking knowledge of Azrael. But the libraries of the Dominies have not helped you, nor have all the histories of the ages of the world.”

In his hands the King-That-Was-And-Would-Be-Again held a skull. The skull said: “Murder and maim, torture and slay, long the path of Isrohim Vey.”

The King-That-Was-And-Would-Be-Again said: “I can tell you nothing, for death has sealed my lips. But this is my counselor and prophet, who may speak as he will.”

And the skull said: “Thou grim unfearing restless soul! Walk alone, no clue to your goal.”

Then Isrohim Vey knew his time in Tíranin had been useless; and Queen Jael came riding through a mirror on a unicorn, and stabbed the King-That-Was-And-Would-Be-Again through his unbeating heart with an emerald pin, and the dead King fell to dust.

The skull fell to the ground and said: “One and all have their fates interlaced. Death’s grin your end; all else is waste.”

Leaving Tíranin, for some time Isrohim Vey wandered the north of the world. He established a society of outlaws in Thursegarth Gianthome; further east, he organized villages of the Mistborn tribes in a defense against incursions of the Nekrûl. Eventually the Nekrûl came in force, with their wicked beasts warped by chaos, their companies of toad-troopers, their priests of old and unclean dogmas. They captured Isrohim Vey, and he was sent to Illullunor in the Clawline.

The Clawline had been carved upon the face of the world before Time began by one of the Elder Gods the Nekrûl worshipped; sunlight never came there, and fungi grew in mutated forms like wind-shaped snowdrifts, and the ground had been made brittle and false by the ages-long gnawing of subterranean acids. Illullunor, the Hideous Prison, was set in the sides of a great rift in the earth; the base of the rift, never seen, birthed cold mists that drained will and strength from the prisoners even as they were made to mine the bitter ores of the Clawline.

The first time, he said “I know who you are. I know what happened at Aruvhossin. I know the things you’ve done since; and why. I know your sword has a destiny, and that is why I have learned these things and brought you here. I am an initiate of the Old God Ophion, and I know Its rites and mysteries and theurgies. I will take your destiny from you. Do you understand? I will penetrate into it and defile it. You must understand. That is how it begins.”

The second time Iä Quis spoke to Isrohim Vey was some while later. Numerous tortures had been inflicted upon the swordsman by that point. Another prisoner, a youth named Valas, had become his guide and ally. This was not known to Iä Quis, and at that time was not relevant.

“Nothingness precedes existence, and is therefore logically superior to it,” said Iä Quis. “The Old Gods of Nekrûl come from the void that was before all things. To return to the gods, all things must be erased. Destiny must be, not simply changed or negated, but turned back on itself. Nihilism, to be perfect, must be universal. But your sword remains a mystery. You yourself have not uttered a word since you arrived in Illullunor, excepting your screams. Speak now; explain yourself, and the history of the sword, and be released.” Isrohim Vey said nothing, and Iä Quis was not sure if the swordsman understood him or if pain had driven him mad.

The third time Iä Quis spoke to Isrohim Vey the Master of Illullunor had a fever’s sweat, and his flesh was pale, as though his blood had dripped out of him. “Ophion is the Old God who first drew the distinction between those who have and those who have not; who invented power and weakness, and the lust for power, and the idea of murder for power’s sake, and all the science of oppression. For power is nothingness … but this, the sword,” and the hand of Iä Quis shook as he indicated Azrael’s Word, “this I cannot unriddle … Only, I find always the same answer … that is, death. Can death, and only death, be your destiny? But that is the destiny of every living thing.”

Then Isrohim Vey spoke to Iä Quis for the first and last time, and said “The meaning of these things is that you will die by Azrael’s Word.”

The complete version of “The Word of Azrael” appears in Black Gate 14.

15 thoughts on “Fiction Excerpt: “The Word of Azrael””