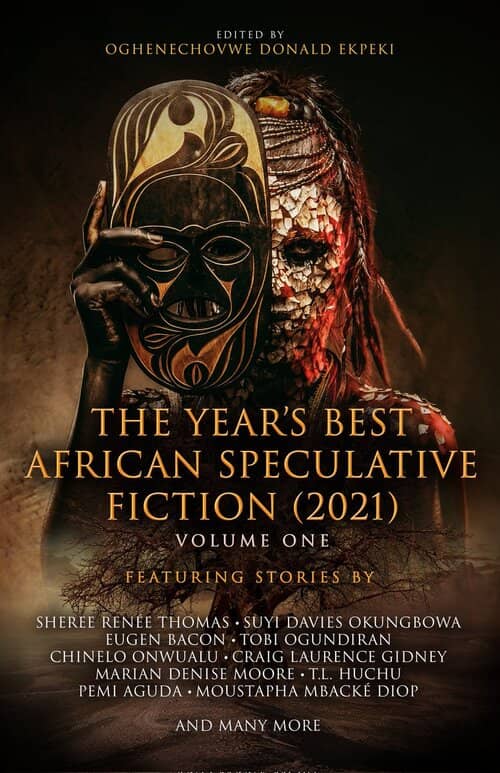 So… it’s about freaking time we have one of these, right?

Having already demonstrated impressive editing chops with Dominion (co-edited with Zelda Knight), Oghenechovwe Donald Ekpeki has created an even greater anthology with this Year’s Best, distilling twenty-nine stories into one of the most cohesive anthologies I’ve ever read. Common threads make this feel like so much more than just a “here’s who we think are the top authors” sort of Year’s Best. We’re being shown part of what African SF is saying right now, and honestly, we should feel lucky to be given this insight.

END_OF_DOCUMENT_TOKEN_TO_BE_REPLACED

The Mask of Mirrors and The Liar’s Knot (Orbit, January and December, 2021). Covers by Nekro

I don’t know about you, but this recent trend in young adult fantasy for covers with elaborate designs and colorful crowns instead of cover art does nothing for me. There’s so many on the shelves, and after a while they all look the same.

At least the book descriptions are different — and that’s what grabbed me in the case of The Mask of Mirrors, the opening novel in a new fantasy trilogy by “M.A Carrick,” the writing team of Marie Brennan (author of the Hugo-nominated A Natural History of Dragons) and Alyc Helms (author of the splendidly pulpy Missy Masters novels). The two met on an archaeological dig in Wales and Ireland, which is exactly where I’d want to meet my future writing partner.

The second novel in the series, The Liar’s Knot, is due next month, and there’s a third volume on the way. Here’s the description on the back of The Mask of Mirrors that caught my eye.

END_OF_DOCUMENT_TOKEN_TO_BE_REPLACED

The Year’s Best Horror Stories: Series II was the second volume in DAW’s Year’s Best Horror Stories. Copyright 1972, 1973, but printed in 1974. Like the first, it was edited by Richard Davis. The cover, by Swiss artist Hans Arnold (1925–2010), was much more in line with a horror themed anthology than the first one. Clearly the cover is an homage to Dr. Jekyll and Mr. Hyde, though there’s no story with a similar theme found within.

It had been two years since the release of DAW’s first The Year’s Best Horror Stories, which had been adopted — story for story — from Davis’ first British Sphere edition with same name. But for DAW’s The Year’s Best Horror Stories: Series II, Davis did more than simply bring over every tale from the second Sphere volume. Some stories were dropped, and some added. Comparing the tables of contents, both volumes contain the Foreword by actor Christopher Lee, “David’s Worm” by Brian Lumley, “The Price of the Demon” by Gary Brandner, “The Knocker at the Portico” by Basil Copper, “The Animal Fair” by Robert Bloch, “Napier Court” by Ramsey Campbell, and “Haunts of the Very Rich” by T. K. Brown, III.

END_OF_DOCUMENT_TOKEN_TO_BE_REPLACED 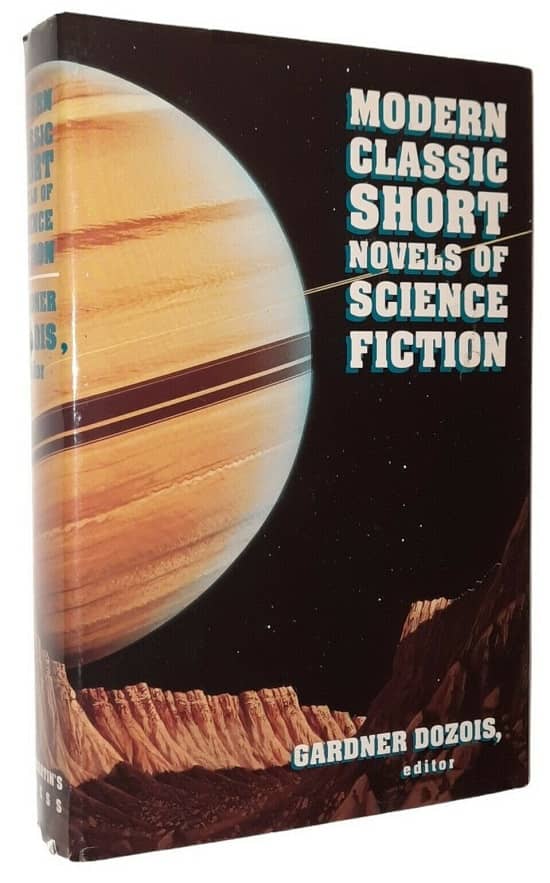 When I talked about Gardner Dozois’ 1997 anthology Modern Classics of Fantasy a few years ago, I called it “a book that makes you yearn to be stranded on a desert island” (or anywhere you could read interrupted for a few days, really.) That description applies equally well to his 1994 volume Modern Classic Short Novels of Science Fiction, a book that over the last few decades has become one of my favorite fall reads. It’s packed with a surprising assortment of 13 novellas from some of the greatest SF writers of the 20th Century.

I say surprising because the first time I opened it, I was a bit taken aback at Dozois’ selections. There’s no sign of Asimov, Heinlein, Clarke, or any of the usual suspects you might expect — no “Who Goes There?” by John W. Campbell, Jr., nor Kornbluth’s “The Marching Morons,” or Kuttner and Moore’s “Vintage Season,” or Theodore Sturgeon’s “Baby Is Three” for that matter. No “Rogue Moon” by Algis Budrys, or “The Witches of Karres” by James H. Schmitz, or “The Big Front Yard” by Clifford D. Simak. Not even H.G. Well’s The Time Machine.

In fact, there’s not a single story overlap between this book and The Science Fiction Hall of Fame, Volume II, which for many of us old timers is the gold standard of classic SF novella anthologies.

END_OF_DOCUMENT_TOKEN_TO_BE_REPLACED

Ashes of the Sun and Blood of the Chosen (Orbit, July 2020 and October 2021). Covers by Scott Fischer

It was the cover of Django Wexler’s Ashes of the Sun that grabbed me while I was browsing bookstore shelves last year — and a heck of a cover it is too, by talented fantasy artist Scott Fischer.

The sequel Blood of the Chosen was just released this month. Like the first one, the cover seems to be a collaborative effort. The original art that Fisher proudly displays on his website is certainly striking…. but it’s also missing those human figures (which I assume were added by cover designer Lauren Panepinto).

Those tiny human silhouettes are a small addition perhaps, but they make a heck of a difference. See the surprisingly sterile originals below.

END_OF_DOCUMENT_TOKEN_TO_BE_REPLACED

Know, O prince, that between the years when Stag-flation and the Iran Hostage Crisis drank the Carter Administration, and the years of the rise of the stepson of Roger Clinton Sr, there was an Age Undreamed of, when sword & sorcery, high fantasy epics, slender trilogies and stand-alone novels lay spread across bookshelves like paper jewels beneath fluorescent stars.

This tongue-in-cheek riff on Robert E. Howard’s famous quote from the Nemedian Chronicles is a perfect way to begin a review of Howard Andrew Jones’s concluding volume of the Ring Sworn Trilogy, because it is both a very modern fantasy, and yet, in so many ways the product of growing up as a fantasy-reading GenXer – which both Jones and I are.

END_OF_DOCUMENT_TOKEN_TO_BE_REPLACED

Joe Bonadonna’s third installment of his Mad Shadows, Dorgo the Dowser series, The Heroes of Echo Gate, was announced this Feb 2021 at Black Gate. We covered Dorgo’s world and Bonadonnoa’s cinematic narrative, which we’ll touch upon again during this review. Also on Black Gate, the author of the internationally acclaimed IX Series, Andrew Paul Weston, reviewed all three books of the Mad Shadow series. This post reinforces those articles and highlights this fresh fantasy adventure’s (a) Epic Scope, (b) Cinematic Style, and (c) Faith theme.

The Heroes of Echo Gate is fun, fresh fantasy. Dorgo and his fellowship of Harryhausen-like creatures defend a magical portal from a horde of demons. Epic!

As the cover implies, we have our beloved weird-fiction investigator & mercenary Dorgo (the guy front and center on the cover with the dowsing rod and sword) defending the titular portal with a band of friends (most of whom could have stared in a Ray Harryhausen movie. For the young readers take note that Harryhausen was the “Frank Frazetta” of cinema who gave life to the fantastical creatures before computer graphics were invented). There are three acts that follow the classic purposes: setup, rising tension, and an epic battle. The climax consumes a full third of the book and resonates with all the grandeur of defending Tolkien’s Helm’s Deep. The city of Soolaflan, on the island of Thavarar, is the fortress and it is situated around Echo Gate. Demons from across time want access to it. The portals across the world of Tanyime (and even across time and space) echo those from C. J. Cherryh’s Morgaine Cycle and even Raymond E. Feist’s Riftwar Saga.

END_OF_DOCUMENT_TOKEN_TO_BE_REPLACED

Cat Rambo made a name for herself with her short fiction — and a successful stint as President of the Science Fiction Writers of America. You Sexy Thing is their first novel release from a major publisher, and it looks poised to be a breakout book. Here’s an excerpt from Liz Bourke’s review at Locus Online.

You Sexy Thing, Cat Rambo’s first space opera novel, is in fact a romp. If you’re the kind of person who likes Mass Effect… then this book is definitely for you. This is a fast, zippy novel that hides some surprisingly substantial emotional heavy lifting under its hood…

Captain Niko Larsen is perhaps the greatest military mind ever to avoid being absorbed by the Holy Hive Mind. She and some of her surviving troops got out of the Holy Hive Mind’s military through the only loophole available to them: they became artists. Kitchen artists: their art is cookery, and their restaurant – the Last Chance, on TwiceFar station – is the first step in a plan that Niko’s had years, if not decades, in the making, a plan that has nothing at all to do with cooking…. You Sexy Thing… [is] fast, pulpy, and explosive – and full of feeling… it’s an utter delight. I recommend it wholeheart­edly.

Check out an excerpt here. You Sexy Thing will be published by Tor Books on November 16, 2021. It is 292 pages, priced at $25.99 in hardcover and $13.99 in digital formats. No word on who did the cover, but I like it. See all our recent coverage of the best upcoming SF and fantasy here.

When an author completes a trilogy, we bake a cake at the Black Gate rooftop headquarters in Chicago. In the case of Curtis Craddock’s acclaimed Risen Kingdom trilogy, the confectionery celebration was unfairly delayed until I found a copy of the final volume, The Last Uncharted Sky, released in trade paperback in August.

It was Charles Stross who drew my attention to the opener, An Alchemy of Masques and Mirrors, back in 2017 when he proclaimed it a “gaslight fantasy in the tradition of Alexander Dumas.” That’s not something I hear every day. The second, A Labyrinth of Scions and Sorcery, offered more tales of “adventure full of palace intrigue, mysterious ancient mechanisms, and aerial sailing ships!” (According to David D. Levine).

The closing volume was first published in hardcover in August 2020. Publishers Weekly called it a “triumphant finale to Craddock’s swashbuckling Risen Kingdoms trilogy… a spectacular series ender.” A truly satisfying and original modern fantasy trilogy is not an easy thing to find. This one reminded me of Howard Andrew Jones’ Ring-Sworn Trilogy; that alone was enough to pique my interest.

END_OF_DOCUMENT_TOKEN_TO_BE_REPLACED

Year’s Best Science Fiction anthologies have been popular for seven decades — since Everett F. Bleiler and T. E. Dikty published The Best Science Fiction Stories: 1949 — but one thing hasn’t changed. You can still tell the hottest writers in the genre by whose names get plastered on the covers. So I was very curious to see who make the grade in Jonathan Strahan’s latest, a huge, nearly Dozois-sized volume crammed with top-notch writers like Alastair Reynolds, Rich Larson, Pat Cadigan, Maureen McHugh, Suzanne Palmer, and many others. For the record, here’s the official list:

Jonathan’s The Year’s Best Science Fiction, Volume 2 was released in trade paperback just a few weeks ago. Tor.com calls this installment “a must-read for anyone who enjoys the vast and exciting world of science fiction.” Here’s a snippet from Reading Llama‘s enthusiastic coverage.