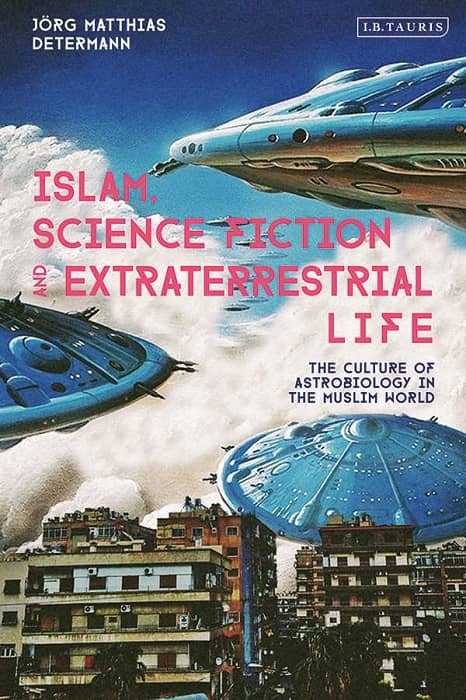 Science fiction and ETs in the Muslim world? Why, yes. Ask Professor Jörg Matthias Determann, a faculty member in the Liberal Arts & Sciences program at the Virginia Commonwealth University School of the Arts in Qatar (the world’s richest country), and Associate Editor, Arabian Peninsula, of the Review of Middle East Studies. He is a historian who worked at Zentrum Moderner Orient, Freie Universität Berlin, the University of London, King Saud University in Saudi Arabia, and was a visiting scholar at the King Faisal Center for Research and Islamic Studies in Riyadh. He is fluent in Arabic, making him a useful guide to the sciences and mythologies of what are called “Muslim-majority countries,” which includes far-flung territories such as Indonesia and Pakistan, plus Saudi Arabia, Iran, Turkey, etc. — in all, a quarter of the world’s population. These in turn are torn by often ferocious enmity between Sunni (about 90%) and Shi’a (about 10%). A bit like Catholics versus Protestants five centuries ago — and they didn’t even have sf to worry about.

I’m fairly sure hardly anyone native to the western centers of science fiction, especially North America, UK, France, Germany, Australia,  has a clue about sf or fantastika in those Islamic lands. Perhaps it’s assumed that reading or writing the usually godless worlds of sf imagination is forbidden or even attracts death threats (p. 148) by excessively devout Muslims. To some extent, as Determann shows, this is so. In 1999, a Syrian-born scholar “issued a fatwa about the permissibility of reading science fiction… ‘If these stories contain lies, such as Darwin’s theory (evolution), and other things that are contrary to the facts stated by Islam… then the Muslim should avoid them” (p. 7). Darwin’s lies, eh? Sigh.

END_OF_DOCUMENT_TOKEN_TO_BE_REPLACED 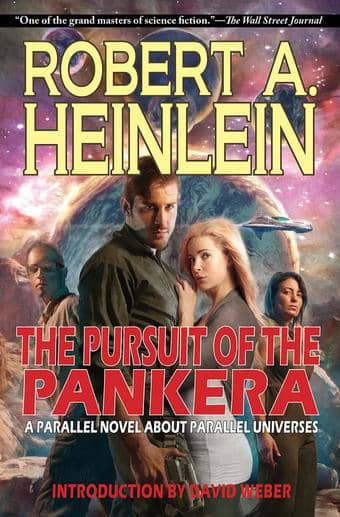 It’s almost impossible to discuss Robert A. Heinlein’s The Pursuit of the Pankera: A Parallel Novel about Parallel Universes without revealing and thus spoiling the plot devices of it and its 1980 prequel/sequel, The Number of the Beast—. Heinlein, first Grand Master of the SFWA, for decades acclaimed as the Dean of sf, no longer pleases everyone. Some readers, especially academic critics, have denounced both books as grossly self-indulgent and even worthless. Others, like the brilliant Marxist professor H. Bruce Franklin (in his important 1980 study Robert A. Heinlein: America as Science Fiction) catch the feel of Beast: “a cotton-candy apocalypse — frothy, sweet, airy, mellow, light, festive, whimsical, insubstantial” (199).

That final word is unjust, since many pages are devoted to an investigation of lifeboat rules, and what Algis Budrys termed “protocol,” capable of mutual acceptance by four genius-level libertarians, two of them women, one the daughter of crusty and irritable Professor Jake Burroughs used to having his own way. Oh, plus an increasingly intelligent and willful computer in the younger man’s flying car, uplifted to true personhood during a visit to… The Land of Oz. This jolly and quite necessary absurdity is a side effect of their discovery that the world is built of myth, of fictons, yielding a kind of “pantheistic multiperson solipsism” occasioned by the dreams, terrors and wishes (as it were) of writers and readers. (Regrettably, Heinlein’s term ficton is “corrected” to fiction in Pankera.)

Robert Heinlein, it follows, is the god (or demon) of the universes the four learn how to visit in Jake’s continua craft. Some of these worlds he had written himself (especially the history of near-immortal Lazarus Long and his incestuous mother and clone daughters, or would write later. Others are the creations of other major writers such as Edgar Rice Burroughs (Tarzan, John Carter of Mars), L. Frank Baum (Oz), Heinlein’s older friend E.E. “Doc” Smith, whose inaugural space opera sequence tracks the psionic Lenses gained by eugenic human warrior-saints, chess pawns in a cosmic war between aliens billions of years older than humankind.