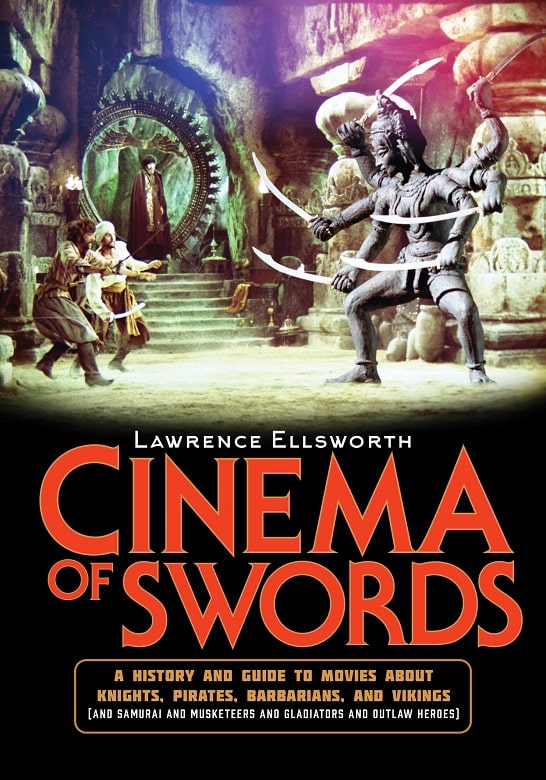 Hellooooo, Black Gate! If you’re a regular reader, you’ve seen my circa-weekly Cinema of Swords articles about swordplay adventure films, but this week we’re here to talk about the full Cinema of Swords volume coming your way this summer, 2023, from Applause Books. This happy event is thanks in large measure to your support and that of Black Gate’s esteemed editor John O’Neill, so thank you! For an author, every new book is an anxious roll of the dice, and it’s a thrill and a relief when your work actually makes it to publication.

So, what will you find in Cinema of Swords? The book’s mouthful of a subtitle is “A Popular Guide to Movies about Knights, Pirates, Samurai, and Vikings (And Barbarians, Musketeers, Gladiators, and Outlaw Heroes) from the Silent Era through The Princess Bride.” Fully illustrated, it compiles 400+ informative short reviews of live-action movies and TV shows on those subjects up through the ‘80s, where I stopped because that’s all I could fit into one volume. I included only films and shows that an interested person can find on streaming services or disc without paying a fortune, so long out-of-print or otherwise unavailable titles didn’t make the cut.

Reviews are listed alphabetically, but in addition to a straight title index, the book includes genre indexes so you can easily find films related to a specific interest. Conveniently, that also provides a way to give you a fuller taste of the book’s contents. Let’s see what we’ve got. 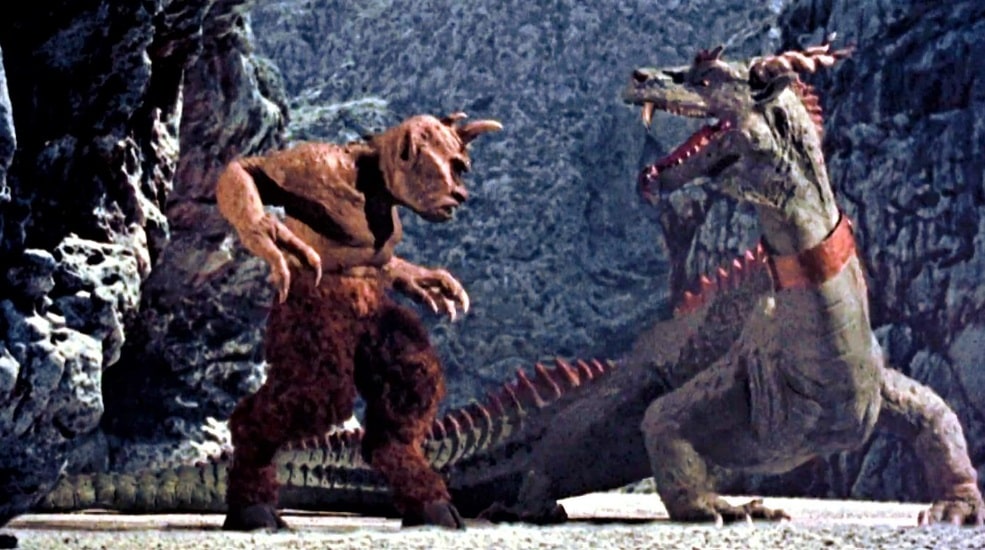 22 titles about Sinbad, Ali Baba, and other heroes from the Arabian Nights, several versions of The Thief of Bagdad, and some wacky parodies we covered in articles like “Goofballs in Harem Pants.”

27 entries covering Mongols, Tartars, Huns, Cossacks, and the fantasy offspring of Conan the Barbarian from the ‘80s “Barbarian Boom.” 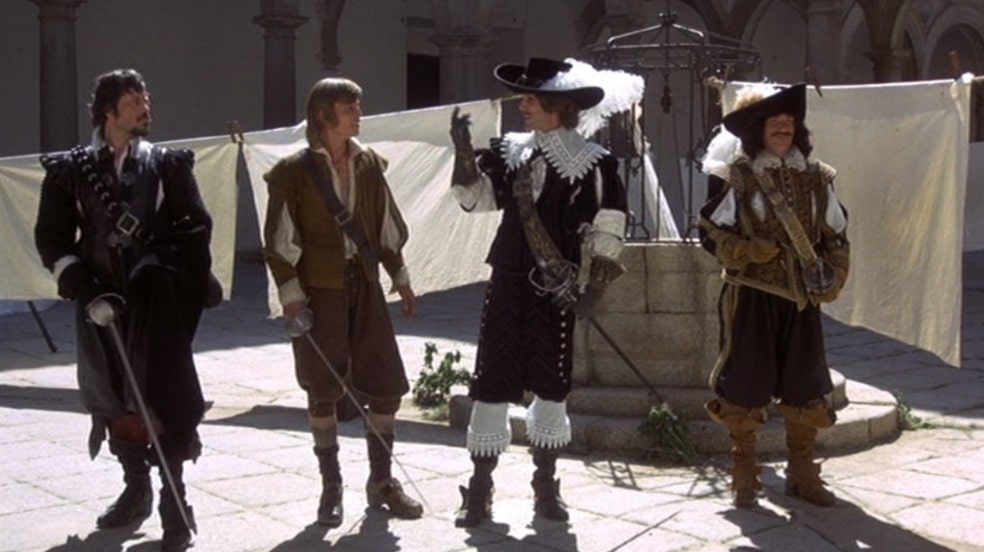 97 titles, including heroes such as the Three Musketeers (a dozen versions), the Scarlet Pimpernel, Cyrano de Bergerac, the Count of Monte Cristo, Don Juan, the Prisoner of Zenda, and many more. Swashbucklers all! 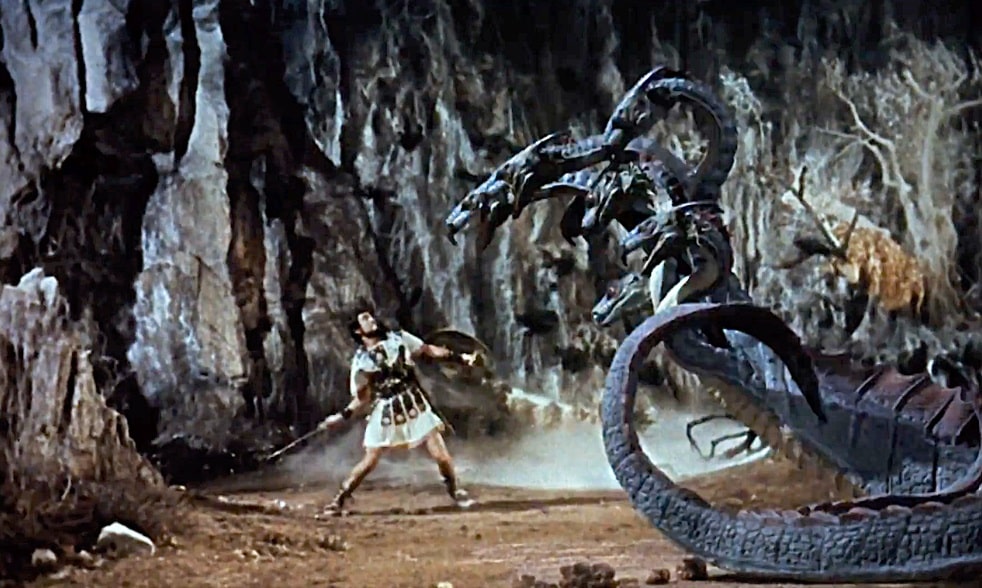 44 titles, including lots of films about Hercules and other shirtless muscleman “peplum” adventures, heroes of Greece and Rome such as Jason and the Argonauts and Ulysses, and gladiators from the sublime (Spartacus) to the ridiculous (Colossus and the Amazon Queen). 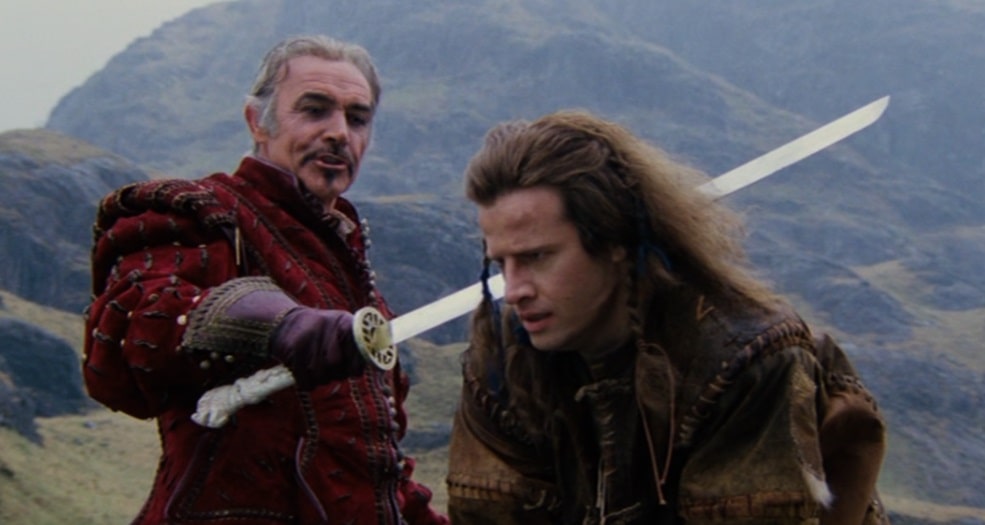 One of the largest categories at 70 titles, and the films of probably the greatest interest to Black Gate readers, including favorites like Excalibur, Ladyhawke, Dragonslayer, Time Bandits, The Princess Bride, and Krull. 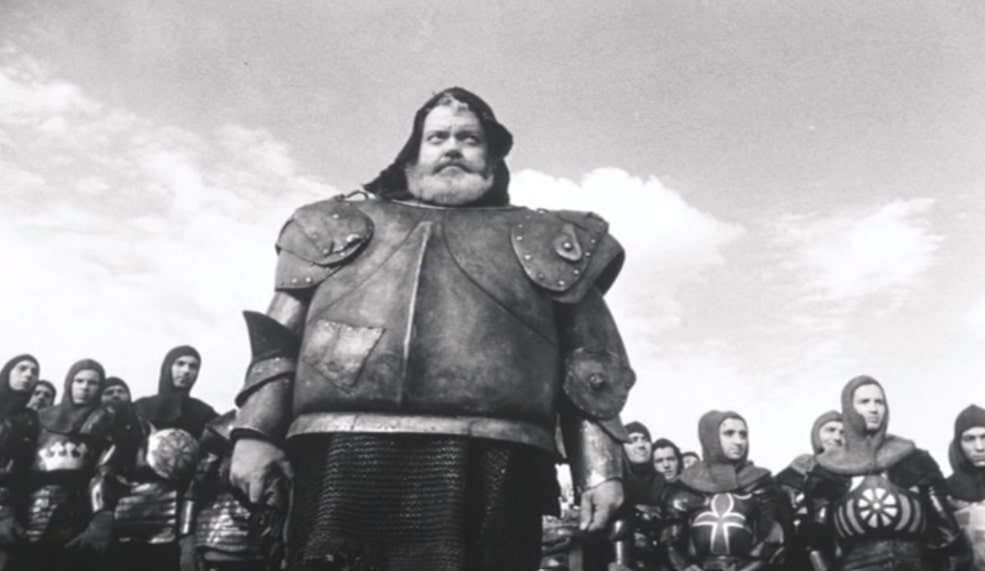 61 titles, including Arthurian epics, various Ivanhoes and other knights in shining armor, in a range extending from Shakespearean drama in Henry V to the shenanigans of Monty Python and the Holy Grail. 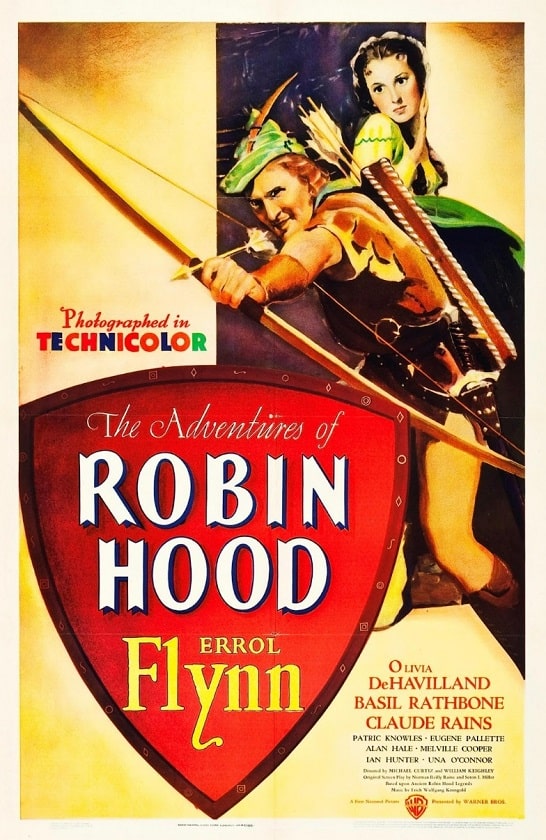 57 titles, including a whole lot of Robin Hood and Zorro, plus the Corsican Brothers, Rob Roy, Harry Flashman, and The Scarecrow of Romney Marsh. 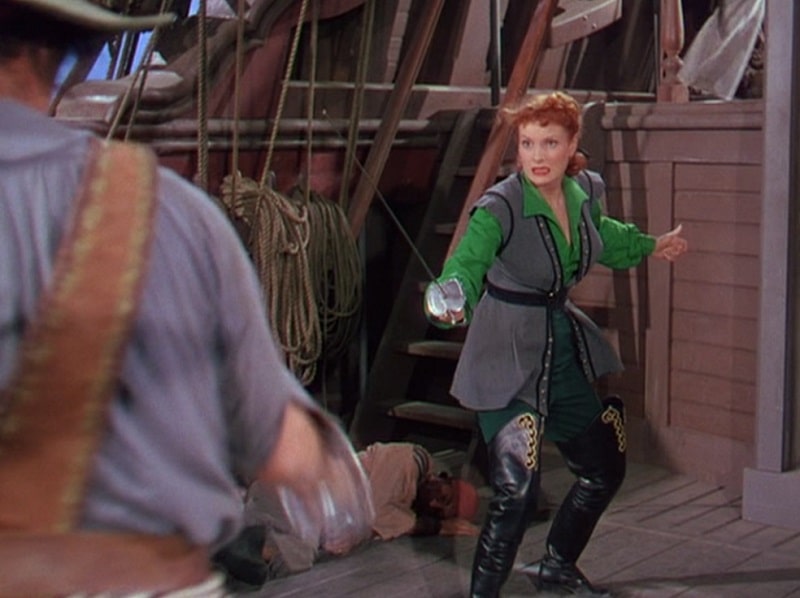 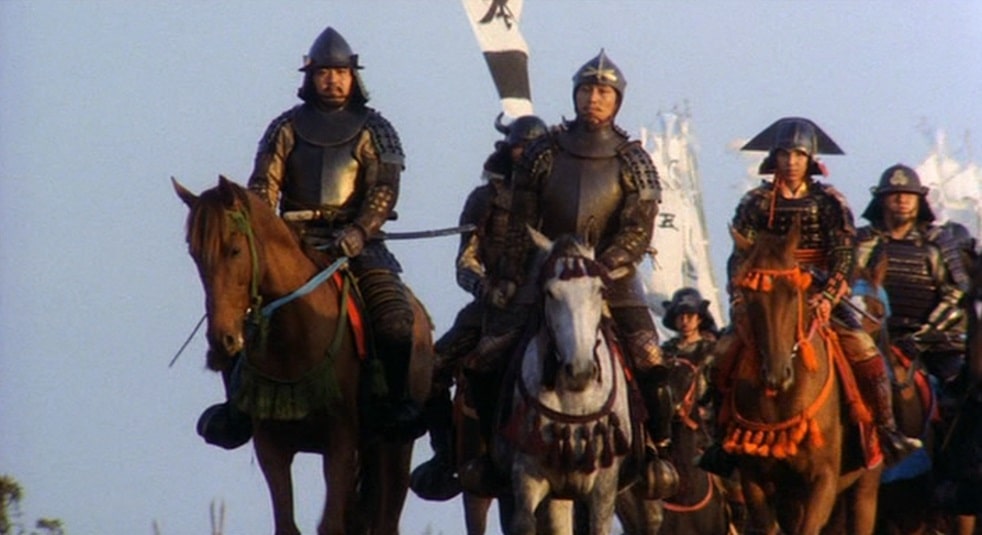 85 titles, including Kurosawa’s classics such as Seven Samurai and Yojimbo, plus series like Lone Wolf and Cub, Zatoichi, The Crimson Bat, and Daimajin (samurai vs. kaiju!). 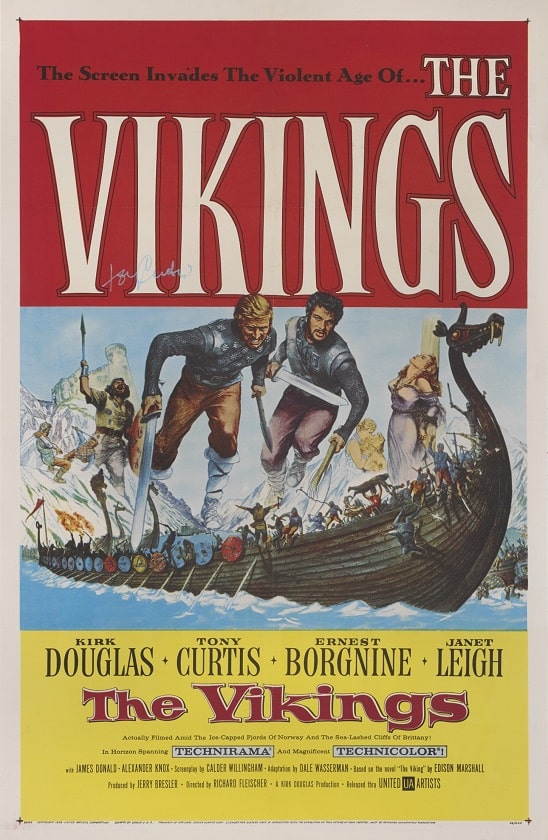 17 titles, from classics like The Vikings and The War Lord to horned-helm travesties such as The Norseman and Viking Women and the Sea Serpent.

15 titles of armed historical martial arts, including hard-hitting features such as One-Armed Swordsman, Killer Clans, and Zu: Warriors from the Magic Mountain.

Alert readers will have already noted that the number of titles in the categories above totals considerably more than 400, but that’s due to the overlap of movies that fit into more category than one. For example, the Ray Harryhausen classic Jason and the Argonauts is listed under both Gladiators and Classical Heroes and Heroic Fantasy.

That’s the high-level overview: let’s wrap up with something meatier that you can sink a sword into. 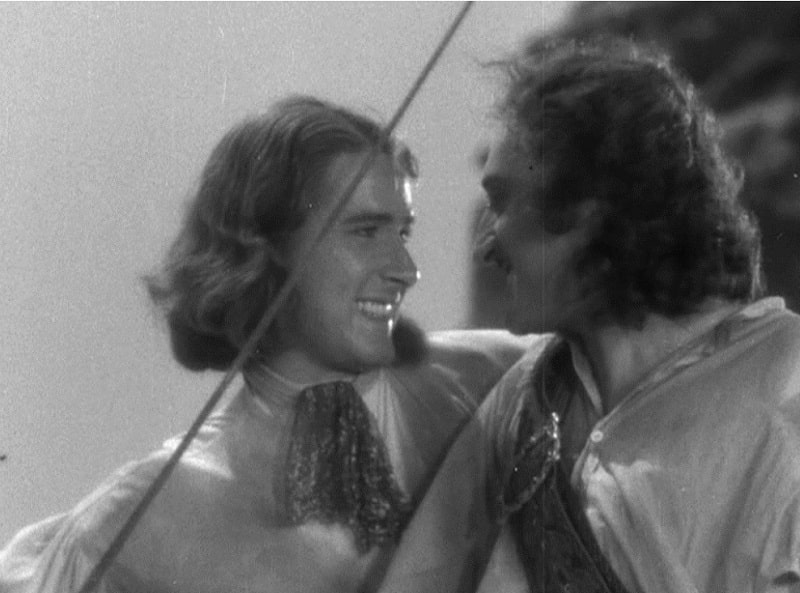 On a Caribbean beach, two scruffy pirate crews eye each other as their leaders, Captain Peter Blood (Errol Flynn) and Capitaine Levasseur (Basil Rathbone), stand and parley. The men are partners, having signed Articles together, but they are also rivals; their talk is tense, and behind their false smiles it’s clear they hate one another. At issue is the fate of a prisoner, Arabella Bishop (Olivia de Havilland), whom both want, and who watches anxiously from the sidelines. Blood makes the highest bid, twelve perfect pearls, and is winner according to the Articles, but as he claims his prize Levasseur, wild-eyed, cries out, “Wait! You’ll not take her while I live.”

“Then I’ll take her when you’re dead!” Blood replies, and both men draw their swords.

This was always what they wanted, and they leap eagerly to the fray, clashing their slender cup-hilted rapiers, beating hard and thrusting fast, both smiling confidently, Blood with a grim smirk and Levasseur with a feral leer. They are evenly matched, and fiercely the bout ranges down the beach, across the sand, into the low surf, and then up onto wet rocks, both swordsmen panting. The footing is treacherous, and Levasseur falls onto his back; Blood pauses, shows his teeth, and says, “Up!” Levasseur rises into a lunge, and the furious duel resumes. When Blood stumbles back, Levasseur gives him no time to recover, pressing him down, and Blood fights his way to his feet by main strength. Then Levasseur overreaches his attack, Blood steps inside his guard and runs him through. The Frenchman staggers and falls back into the surf, already dead as a wave breaks over his face.

And that’s what it’s all about. This is not a serious book, it’s an informed appreciation of a popular genre, a guide for a general audience. Your Editor is not a media historian, has not been to film school, and is not an expert fencer: I’m a veteran designer of narrative video games, and a writer and translator of historical fiction specializing in swashbucklers. My most recent project in that field has been compiling and translating new versions of Alexandre Dumas’s Musketeers novels, including The Three Musketeers; as a hobby, I used to fence with rapier and dagger, before arthritis robbed me of my knees and wrists; and though I haven’t written screenplays like some of my fellow narrative game designers, I’ve worked for many years as a visual storyteller. Add that all up and I think I have some claim to expertise about movies where the subjects are pirates, knights, Vikings, and sword-slinging cavaliers.

Mainly, though? I just love this stuff — as you probably do, or you wouldn’t have picked the book up in the first place. It’s a popular genre, and there sure is a lot of it, so I set out to compile a handy guide to movies and shows of swordplay that would hopefully answer the question: Do I want to watch this?

My method is to briefly describe what each entry is about, so you know whether the subject matter is up your street, calling out highlights that make a flick enjoyable and memorable, or weak points that make it lean toward suck, all summarized with a tl;dr rating system of one to five stars. Because I’m recommending films for a general audience, who tends to prefer more modern presentations, I’ll often knock off a star because a movie is black-and-white, is subtitled, or is really long (so when I tell you that Seven Samurai, which is all those things, is nonetheless a Five-Star Essential, you can damn well believe that’s just what it is).

Above all, I’m a storyteller, not an academic, and I write to entertain. My goal is that every mini-retro-review in this book is a fun and interesting read, even if it’s clear that the film being reviewed isn’t your jam. If The Cinema of Swords succeeds as what you might call a bathroom book, then I’m happy. If you enjoy it well enough that it merits a place on your regular bookshelf, that’s even better. As a former fencer, I’ll always take a point scored, even if it’s a low blow.

LAWRENCE ELLSWORTH is deep in his current mega-project, editing and translating new, contemporary English editions of all the works in Alexandre Dumas’s Musketeers Cycle; the sixth volume, Court of Daggers, is available now as an ebook or trade paperback from Amazon, while the seventh, Devil’s Dance, is being published in weekly instalments at musketeerscycle.substack.com. His website is swashbucklingadventure.net. Check them out!

This is the best news I’ve heard all week, Lawrence.

Congratulations! The book looks absolutely fantastic, and having all of your Cinema of Swords articles in one handy volume is a godsend. This is a book that every Black Gate will want to give a place of pride in their library.

yeah but… how do i get mine signed? 🙂

Perhaps the signing could be an “E” rather than a “Z,” topical…

Ellsworth’s Cinema of Swords in PRINT? Sign me up, Bwana!

Great news. Applause Books, eh? I’ll have to keep an eye on them.

Looking forward to this one, thank you sir!