I started reading science fiction and fantasy in the late 1970s, with authors like Isaac Asimov, Robert Silverberg, Stephen R. Donaldson, and of course J.R.R. Tolkien. I learned an enormous amount from those early books, about astronomy, and space travel, and speculative physics and chemistry. And about adult relationships, and the US. military, and the kind of alien life that might exist on Venus (the kind that resembled dinosaurs, obviously).

But one of the most important things I learned was that fantasy adventures occurred elsewhere. In big cities in the United States, and small, magical towns in England. In underground government labs, and secret rebel bases on the ice planet Hoth. They certainly didn’t happen in my home town of Ottawa, Ontario, and the surrounding valley. At least, they didn’t until Chares de Lint burst on the scene with his own brand of fantasy in 1984, with books like the groundbreaking Moonheart, which helped launch the urban fantasy explosion of the 80s and 90s. 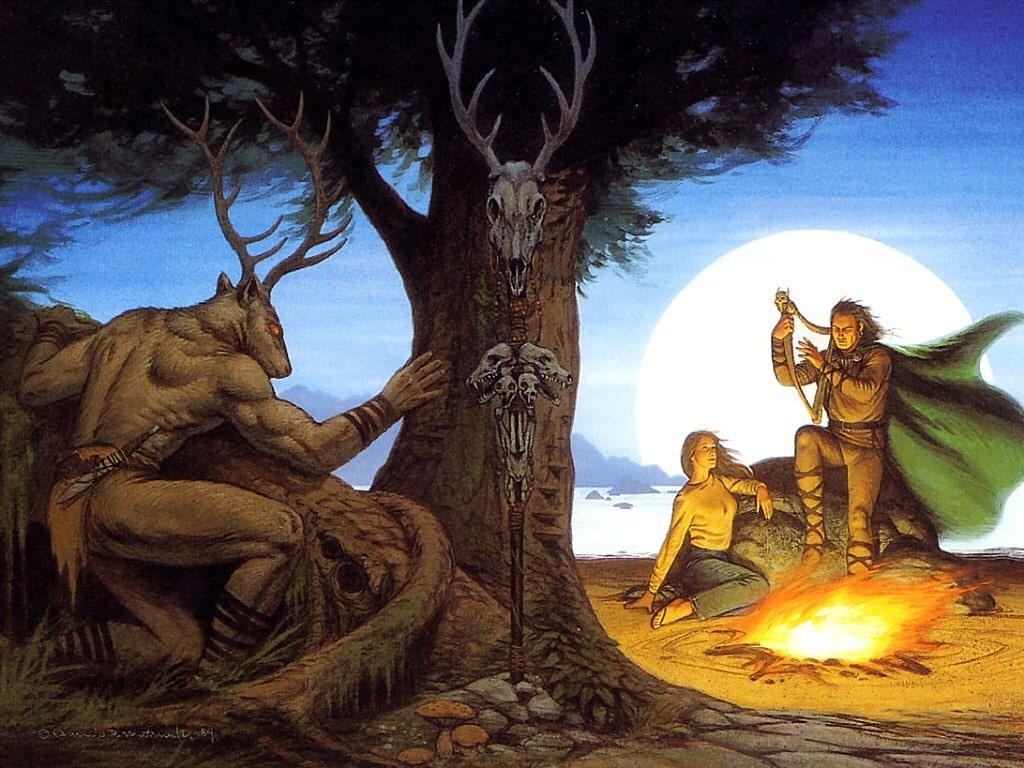 De Lint was well known to most Ottawa fans before his first novel, Riddle of the Wren, was picked out of the slush pile at Ace Books by editor Terri Windling. Over the next few decades Windling became justly famous for championing the mythic fiction resurgence, and de Lint was perhaps the most important writer of that 80s era literary explosion.

I learned about Charles and his new novel because it was thrust into my hands by the owners of The House of Speculative Fiction bookstore in Ottawa, Pat Caven and Rodger Turner, and because Charles used to hang around the store, like many in local fandom. Like every other local fantasy reader in Ottawa, I read The Riddle of the Wren and enjoyed it when it was released in June, 1984, but it wasn’t until Moonheart was published in October of the same year that it became apparent that de Lint was truly a major writer.

If The Riddle of the Wren was a literary fireworks display, Moonheart was a nova. It was the book that everyone in Ottawa fandom talked about obsessively for months. Set in downtown Ottawa and centered around Tamson House, a sprawling old edifice that takes up an entire city block, Moonheart was the book that taught me that great fantasy could be set anywhere — even in my boring hometown.

It was enough of a local sensation that readers could frequently be spotted in the Glebe in downtown Ottawa, copies of Moonheart in hand, pacing out the geography of Tamson House like tourists circling the Eiffel Tower.

Other tales of Ottawa and the Valley: Yarrow, Greenmantle, and Spiritwalk
(Ace Books, 1986 and 1988; Tor, 1992). Covers by Segrelles and David Bergen

Moonheart was the first book de Lint set in Ottawa and the Ottawa Valley, that peculiar piece of Upper Canada that forms the transition between the Saint Lawrence Lowlands and the Canadian Shield. But it wasn’t the last. Over the next few years he followed it Yarrow (Ace, 1986), Greenmantle (Ace, 1988) and roughly a dozen short stories loosely recounting the adventures of the inhabitants of Tamson House, most of which were collected in Spiritwalk (Tor, 1992).

Moonheart didn’t just take Ottawa by storm; it almost immediately established de Lint as a major fantasy writer. Here’s just a sample of some of the contemporary coverage. From Newswest, May 1991:

Mr. de Lint is unique in the Sci-Fi/Fantasy field for the very best of reasons: he does not write like anyone else. In a genre which is famous for tired, overworked plots, this is breathtakingly refreshing. Charles de Lint has written several books but my personal favourite has always been Moonheart. Consider that in one novel you have an RCMP Inspector who heads the Paranormal Research Branch, a centuries old Druid, a biker and an Ottawa house with entrances to two worlds, throw in a character who is half man, half stag, and you have the basis for a truly original novel. Now have this novel written by a very talented author who is endowed with a seemingly boundless imagination and you have great entertainment. I promise you won’t be bored.

And from Dragon Magazine, April 1985:

Good reviewers are supposed to avoid the quotable superlative; used too frequently, such adjectives tend to erode professional credibility. But occasionally, a book appears that urges even the most jaded columnist to break out in rampant enthusiasm. Moonheart is one of those books. More than that, it shows a streak of originality that is missing in far too many current fantasies. The pattern that de Lint weaves from some of the genre’s most familiar strands forms a refreshing and distinctive design. Settings and characters from a variety of aeons and cultures are expertly intertwined to form a complex yet coherent plot. Also, each personality is stitched together with unusual realism. The touch of rare genius in Moonheart will linger in the imagination long after the last page has been turned. Novels this good are rare indeed, and they are well worth a brief lapse into superlatives.

Contemporary readers still find plenty to enjoy. Here’s my current favorite review, from Darth Anyan on Goodreads (where the book enjoys a 4.05 rating).

Tamson House – a sprawling manor in the old part of Ottawa, home to siblings Sara and Jamie and to their oddball collection of guests – is reminding me of Little, Big by John Crowley. Tamson House is large and weird and apparently can open doors to alternate realities, woodland places where creatures from ancient myths still roam freely, while outside its walls the ordinary life of a big city goes on without a clue. Sara and Jamie own an antiquities boutique and have welcomed to their house people living on the fringe of conventional social life : musicians, painters, ex-bikers, ex-drug addicts, drifters and dreamers. It’s a peaceful, rewarding, friendly atmosphere, but a powerful magical storm is getting ready to assault the walls of Tamson House.

It all starts with Sara discovering a curious medicine-bag among the old dusty crates in the storage of her antique shop. Celtic scrollwork meets Native American shaman gadgets and pretty soon Sara and the rest of her friends are involved in mysteries that go back across the Atlantic and across several centuries, all the way to the shores of Ireland where a famous bard named Taliesin is banished from the court of a local king for challenging his druids to a music contest.

Sara’s storyline is interweaved with several others, both in Ottawa and in a parallel forest universe, where the same Celtic and Native American mythologies meet and mix, sometimes peacefully, sometimes in open conflict. Kieran, an ex-convict and traditional Irish music player, comes back to Ottawa after receiving subliminal mental messages from his mentor in magic, a secretive druid who is also wanted by the Mounties (RCMP) and by a ruthless businessman.

The premise this far reads more like a setup for a romantic comedy with cute magicks thrown in, but the author manages to get a grip on the story and to avoid the easy traps of popular entertainment….

Here’s all the details on all four de Lint books set in the Ottawa Valley.

The first three were paperback originals; Spiritwalk was originally published in hardcover by Tor. All four are currently available in digital formats.

I still want to live in Tamson House when I grow up.

You and half the readers in Ottawa, Joe!

I have enjoyed Mr. DeLint’s work for a long time, particularly his Newford material, starting for me with his collection Moonlight and Vines. He did get me started thinking about the concept of “urban fantasy”, where I wonder if there are 2 flavors: “urban” and “fantasy”. I think of the first as works that investigate the magic of urbanity, like Fritz Leiber’s Our Lady of Darkness or “Smoke Ghost”, while the second are contemporary fantasies that include urban settings. Ms. Emma Bull’s War for the Oaks seems to straddle the divide, and I think Mr. DeLint is principally in the second one.

Interesting stuff, Eugene. There was a magnificent boom in Urban Fantasy in the 80s and 90s, with writers like Will Shetterly, Emma Bull, Megan Lindholm, Steven Brust, Terri Windling’s shared Borderlands universe, and lots more.

Urban Fantasy eventually was completely supplanted on the shelves by Paranormal Romance, and there was a time when it seemed the majority of new fantasy books featured women cops and investigators getting hot and heavy with vampires, werewolves, and undead of all shapes. That thankfully died out in the mid-2000s. Sadly, Urban fantasy never seemed to make a return after that.

Yes, Paranormal Romance seems to be the current term for Contemporary Fantasy (so, “AC Fantasy”, as compared to “YA Fantasy”, hmm?). I am ancient enough to recall when we used terms like ‘High’ Fantasy (medieval-ish stuff) and ‘Low’ Fantasy (modern-ish stuff). I am surprised we cannot find a ready-to-use label for fantasy that has a contemporaneous basis rather than a misty, mythic past-times vibe.

Yeah, I remember the brand distinction between High Fantasy (Tolkien, Dunsany, etc.) and Low Fantasy (Robert E. Howard, Fritz Leiber…) as well. It was easy to remember, but I don’t think it was all that useful, and I don’t miss it much.

Nice article, John. I’ve been a big fan of de Lint’s work since 1984, myself, and this is a nice reminder of some books I haven’t revisited in years. I’m afraid he’s had no small influence in my adoption of (classic) urban fantasy as the preferred sub-genre for my own writing! And yes, the idea of a fantasy novel set in Ottawa registered a positive impact large enough to be felt on the East Coast as well!

De Lint inspired many (many!) writers to try their hand at urban fantasy in the 80s and 90s. I’ve read the draft of your book, and I’m sure it won’t be long before it’s on bookstore shelves across Canada as well.

I might add that Jack the Giant-Killer and Drink Down the Moon (which at one point were collected in The Jack of Kinrowan) are also set in Ottawa. As was Mulengro and the horror novel Angel of Darkness.

Thanks Charles! I should have noted all of those in the article, especially Mulengro, which I read all those years ago. Sloppy research (and memory!) on my part. Though this does remind me I need to track down a copy of the beautiful omnibus edition of The Jack of Kinrowan.

How is Triskell Press doing? I’ve seen a lot of buzz about the just-released Juniper Wiles and the Ghost Girls. 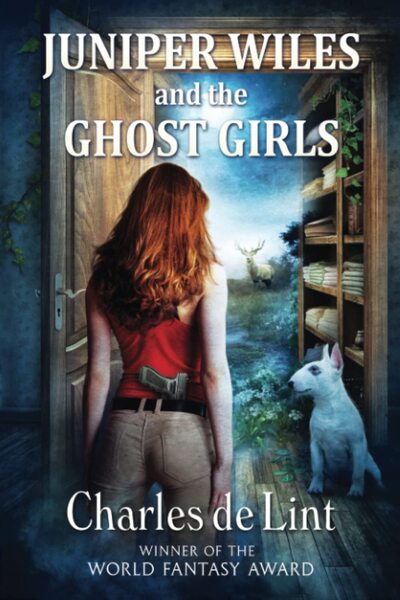 It seems to be doing well, John, thanks for asking. I’ve got great readers!