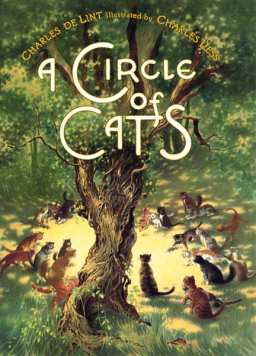 Although it’s very short (48 pages, at least half of which is full-color artwork), A Circle of Cats is a complete and satisfying tale. It tells the story of Lillian, a 12-year-old orphan who lives on the edge of a vast and very old wood with her aunt. One day, after all her chores are done, Lillian chases a deer into a part of the woods she’s never explored before. Falling asleep at the foot of a great gnarled tree, she disturbs a snake that strikes her three times.

As she lays dying, a circle of cats forms around her, for Lillian has found their ancient gathering place. The cats decide to intervene, and when Lillian awakens, she finds herself in the body of a kitten.

What Lillian finds as she explores the woods as a cat, and the strange creatures she meets, form the bulk of the tale. But as night arrives and her elderly aunt begins a desperate search deeper and deeper into the woods for her, Lillian’s efforts to find a way to return to human form become more determined. Ultimately, she learns that getting what she wants will require help from friends she didn’t know she had, and an unusual sacrifice.

Fans of de Lint and Vess’s earlier collaboration, the massive illustrated fantasy Seven Wild Sisters (Subterranean Press, May 2002), will find both the setting and some of the characters familiar, including Aunt Lillian, The Apple Tree Man, and The Father of Cats. De Lint and Vess also collaborated on Medicine Road (Tachyon Publications, June 2009), featuring the further adventures of the red-haired Dillard twins, Laurel and Bess, from Seven Wild Sisters.

While it is primarily intended for young readers, A Circle of Cats is still a fine introduction to Charles de Lint’s fiction, as it has all the hallmarks of his work, including fascinating characters, magical settings, and a story richly suffused in myth. Vess, the artist behind The Book of Ballads and three books with Neil Gaiman (Instructions, Blueberry Girl, and the illustrated version of Stardust), delivers his usual excellent artwork.