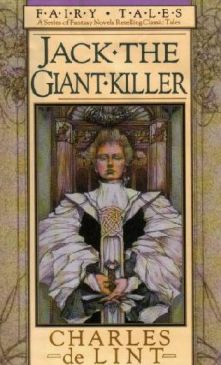 Charles de Lint’s Jack the Giant Killer is an urban fantasy novel, but it feels more accurate to call it an urban fairy tale. It’s set in Ottawa and makes frequent references to streets and landmarks; I have a feeling I’d get even more out of it if I were the least bit familiar with the city. Fortunately, geographic familiarity is not required to enjoy this story.

Jacky Rowan has just been through a moderately poor breakup. Her boyfriend stormed out after declaring her a predictable, boring shut-in. Partly because of his accusations, partly because of feeling empty and numb, she cuts off her waist-length hair, goes drinking, and then wanders down to a park, reflecting on her life and whether or not it means anything.

She has a distinct impression of someone watching her from the blacked-out windows of one house, but before she has time to reflect on that, she witnesses what appears to be a biker gang chasing down what looks like a small man.

All this happens in the first nine pages. This book is fairly short — eventful, but short — and the story moves fast. Jacky fails to stop the bikers, who kill their quarry, and after they’ve left she takes the victim’s red cap.

And that’s the event that really gets the plot going, because the cap is a hob’s spellcap and it allows the wearer to see the things and beings of faerie. In short order, Jacky meets Dunrobin Finn, a hob who stitches some spells into her clothing for slight extra protection, sees a giant prowling for victims, and goes to confront the watcher in the darkened house — a wizard in his tower, even if the house loooks less than tower-like from the outside. And then, partly because it needs to be done and partly because she wants something meaningful to do, she offers to rescue the Laird’s daughter from the Unseelie Court.

This is where the fairy tale part starts to come in. All the faeries know enough legends to realize that when a bold young human named Jack (or Jacky) sets off to rescue a princess from evil giants, she might actually manage it. Jacks are tricksters and heroes; they have to manage the bravery and quick thinking on their own, but the archetype comes with a generous helping of luck. Several faery beings join her quest or help her because of her name. 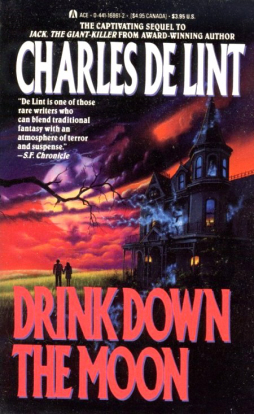 Her staunchest ally, however, is her best friend Kate Hazel. I like how this character is handled. She could have been a generic Best Friend type, present only to show that Jacky has roots in the mundane world, saying a few words about Jacky’s boyfriend being an ass and not to worry about him before being shunted firmly to the sidelines by the developing supernatural plot.

Instead, she’s the first person Jacky looks to for help, and she provides it. She has good sense, she’s as brave as Jacky, and she doesn’t waste a lot of time saying, “There’s no such thing as faeries therefore they can’t be trying to kill us.” If you’re specifically looking for books with strong female supporting characters, Jack the Giant Killer should be somewhere on your list.

All in all, I very much liked this book, and not just because of my love for modernized or adapted fairy tales. It moves quickly. It’s exciting. Ordinarily, I’d have a problem with the fact that Jacky sometimes seems to survive on sheer luck, but luck is explicitly stated as one of a Jack’s powers — and anyhow, she spends most of her time running toward the danger, which is much more palatable than a hero who gets lucky while standing still. I’d recommend this book to anyone who’s looking for urban fantasy, or something with a touch of myth, or an adventure where a young hero is thrust into the deep end all at once.

The sequel to this story is Drink Down the Moon (Ace, June 1990). It and Jack the Giant Killer were collected in a handsome trade paperback omnibus called Jack of Kinrowan (Tor Books, 1999), still in print.

Man – I don’t know how many times I’ve read this book! I think it was the first of the Faerie Tales for Adults series, which let me to Pamela Dean’s Tam Lin and McKillip’s Something Rich and Strange, among others. Drink Down the Moon is good too. I think I have the omnibus. If I don’t, I really should!

Black Gate » Blog Archive » A review of War for the Oaks, by Emma Bull

[…] Charles de Lint’s Jack the Giant Killer, which also appeared in 1987 (and which I reviewed here.) If I’d known exactly how similar they were, I’m not sure I would have picked it to review for […]

Jack the Giant-Killer, in Urban Fantasy | Tales of the Marvelous