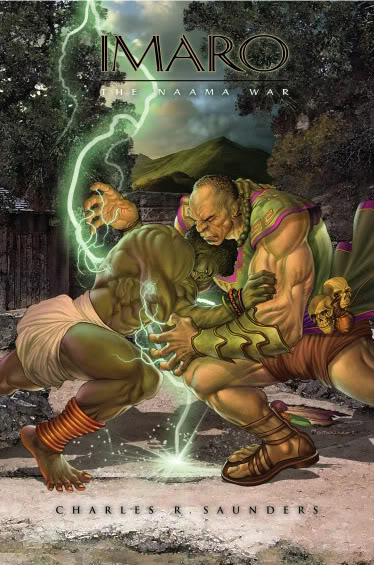 Here we have the long-awaited fourth volume in the “Imaro” series of sword-and-sorcery novels set in a fictional fantasy Africa. Imaro: The Naama War brings to a conclusion the many character arcs and plotlines that have built through Imaro (1981; revised 2006), Imaro 2: The Quest for Cush (1984; revised 2008), and Imaro: The Trail of Bohu (1985; revised 2009). The third book (which was the first written specifically as a novel instead of a collection of novellas and short stories) moves the tale of the Ilyassai warrior Imaro into the territory of the grand epic, threatening to plunge all of the continent of Nyumbani into a battle between the gods and the kingdoms they support, with Imaro as the fulcrum point. The novel ends on a cliffhanger, with the war about to erupt.

Now at last we have that great battle of gods and men, which Saunders started writing back in 1983. And it’s Epic. Big Capital “E” Epic. Charles R. Saunders more than rewards readers’ twenty-five years of patience with the single best installment in the saga of Imaro. This is sword-and-sorcery beauty, filled with bloody rage, bizarre magic, pounding battles, horrific monsters, and intense emotion. It is one of the best fantasy novels I have read over the past five years—and I’m actually glad I came late to reading the Imaro stories, because it means I didn’t have to wait so long to read the last and the best.

Imaro: The Naama War is the sort of fantasy trip I love to take, and I’ll admit that I felt an enormous rush of emotion and nearly came to tears during the thirty page wrap-up, where Saunders refuses to let the reader go from the passion of the story and the characters’ dramatic journeys. The escalation from the beginning to the unexpected conclusion is pitch-perfect. It is almost a textbook for how to build suspense and keep readers reeling with surprises while also maintaining their belief in the story’s inner truth.

I hope my opening paragraphs have at least made this clear: if you haven’t read any of the Imaro saga, you shouldn’t be starting with the fourth installment. The four volumes aren’t stand-alone hero tales but chapters of a rising epic that pays off immensely if you read it from the origin point. I say this upfront because in order to discuss even the outlines of the plot of The Naama War requires that I spoil some of the twists in The Trail of Bohu. So, potential new reader, you are warned.

The fourth novel begins immediately where The Trail of Bohu concludes. Imaro is now among his father’s people, the Ngwika tribes of the Abamba Highlands, under the leadership of his uncle Nkwana. While all the East Coast kingdoms prepare to go to war against the Naamans and their wizard rulers the Erriten in the south, Imaro has the task of stopping the chaotic disturbances of mfecane. The creator of mfecane is Bohu, a warrior-sorcerer who wields the dark magic of mchwai and is the Naaman equivalent of Imaro in the battle to re-establish chephet, the balance between the warring gods the Cloud Strikers and the Mashataan. For Imaro, the quest to slay Bohu is a personal one, for the Naama slew Imaro’s wife Tanisha and young son Kilewo.

The story spreads out wide almost immediately after the opening chapter, with action occurring all across Nyumbani as forces gather and plots and magical treacheries simmer everywhere. The ruler of Cush, the Kandisa, rallies together the armies of the East Coast, while Imaro’s father, Mkwayo the King of Amanyani, and his allies prepare to attack in a pincher movement against the Naamans.

Imaro and his uncle Ngwika move through the lands of the Tsubi, herders whom mfecane has deformed into mad skin-and-bones killers. Imaro’s bracelets, gifts from the Kandisa to lead him to Bohu, point him in the direction of his target, but he insists he makes the trip to the confrontation alone. However, Imaro’s cousin Solosha convinces the warrior to let him comes as his guide, and the two men become close in their journey. Solosha learns about the hatred in Imaro and his continual desire to prove himself that started in his youth as an outcast within the Ilyassai.

The novel reaches an early and enormous action highlight in a naval battle between the Kandisa’s alliance and the Naamans, which includes sudden betrayal and a horrific attack from the unthlatu, serpent people. At the same time, Imaro has his first face-to-face meeting with Bohu, and it goes an unexpected direction when Bohu makes a bizarre offer to Imaro . . . along with two revelations that, if true, will change everything about Imaro’s life. This brutal encounter between these two champions of the Cloud Strikers and the Mashataan doesn’t disappoint in its frenzy. The action and writing are superb. And this occurs only a hundred pages into a three hundred and thirty-one page novel!

But even though The Naama War reaches a major climax so early, the story still has numerous surprises left. The Erriten have tendrils that reach many places, even into the capital and royal family of Amanyani. Imaro remains on the hunt for Bohu, trying to find the truth about what his enemy told him, and Bohu’s brother, Shingane the Great Elephant, moves the Mtawa tribes of Abamba to strike against Amanyani as they continue mfecane.

Saunders had shown in The Trail of Bohu a broadening of the cast and focus of Imaro’s story, and the author achieves a wonderful balance here as his writing spans the continent, crossing between massive battles and one-on-one fights with monsters, and encompassing a large number of principal characters. Imaro is not the sole hero; fighters such as Solosha, Nkwana, Mkwayo, Rakhma, and women like the Kandisa and Imaro’s mother Katisa are crucial movers of events and frequent point-of-view characters. One of the high points of the novel is a death-duel involving a secondary character. It’s one of the finest of its kind of bloodletting madness and catharsis that I’ve read . . . and it doesn’t need Imaro to make it thrilling.

Unfortunately, a few characters do suffer from the great scope of the book. Pomphis and Rabir, major allies from earlier in the saga, have less to do here, and I missed spending time them—especially Pomphis, my favorite character in Nyumbani. However, it is a necessary sacrifice, and Pomphis at last gets a key part in the closing chapters.

Imaro himself isn’t slighted; he has to take on a different characterization in the continent-spanning action where he has become the unwilling central plateau. He had turned so dark and deadly that his closest friends wonder what has happened to him. Any illusion that Imaro is “the black Tarzan” (as DAW mistakeningly tried to promote him in his first book) has evaporated. The brooding, distant, and ferocious man who has developed over these four volumes is a unique and fierce hero, hypnotic even when he isn’t on the page.

Saunders doesn’t hold back on the fantasy aspects of Nyumbani in the great war. There’s a cornucopia of monsters with tantalizing names: inguluku, unthalu, irimu, inzingogo. The irimiu, or lion-demons, are particularly vicious and fascinating opponents, and they add a level a fantasy fury to the major combat scenes; I never got tired of reading about the heroes tangling with them. The Erriten and their masters the Mashataan work as well as they did in the previous books through the power of implication; we never spend too much time with them and never quite come to grasps with how they or their agents operate. This is exactly how it should be. Dark magic is best when it crawls in the dark.

The battles become more monstrous (both in size and participants) as the end nears, and the focus switches rapidly between the characters as the conclusion looms. But Saunders makes even better emotional gut-punches than he does sword-strikes, leading into a closing that—sigh, yes this is a cliché, but it’s the truth—makes the book impossible to put down.

Bravo. Goddamn brav-o. And that’s all I’ve got—because I’m dashing back to re-read Imaro and start the journey from the beginning again.

Charles R. Saunders has information regarding the fourth Imaro novel’s long journey to the light of publication at his website.

The other three Imaro books have been reviewed on Black Gate:
Imaro, reviewed by Howard Andrew Jones
Imaro 2: The Quest for Cush, reviewed by me
Imaro: The Trail of Bohu, reviewed by Bill Ward (and my take at my website)

Excellent write up, Ryan! You have made me move the Imaro titles higher in the TBR shelves.

Great to see this reviewed at last,excellent job Ryan.

Now that the series is complete, no excuses not to read it. It’s every bit as seminal as Moorcock, Howard, Leiber, and Vance.

Actually ‘seminal’ isn’t the right word, since it’s so under-appreciated. But what it is is terrific.

[…] Gate Reviews: Imaro – The Naama War by Charles R. Saunders Here we have the long-awaited fourth volume in the “Imaro” series of […]

[…] at the Black Gate blog, Ryan Harvey recently sang his praises with a review of the latest Imaro book: Now at last we have […]

[…] the climax of the series and, thankfully, we can all now read the concluding volume to the series, Imaro: The Naama War, thanks to Sword & Soul. I’m not alone in placing this series squarely alongside the […]

Im interested. Iwonder if I have read the first volume as a scholadtic edition as a grade schooler. The forces of PC would love to prop up such a genre but though I have issues with that if its a good story I like it. Even if I otherwise prefer my “black” characters in the good old “pulp” stereotypes of filed teeth jungle cannibals and background filler harem slave girls;-)

Sad News – The word on twitter is Charles R. Saunders passed away back in May.