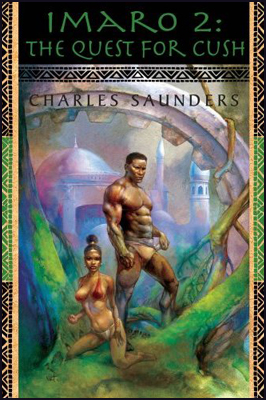 Let’s put the lie to a hackneyed advertising slogan: you do get a second chance to make a first impression. Imaro offers the proof. Charles Saunders’s sword-and-sorcery hero didn’t make a good first impression in paperback publishing during his inaugural go-round in the early 1980s. DAW Books released Imaro 2: The Quest for Cush in 1984 to follow up the groundbreaking-but modest-selling Imaro. The sequel suffered the same mistaken marketing fate as its predecessor. Saunders also admitted that he delayed too long completing the second book; when it finally reached the bookstore shelves, the first book had already faded from view. Thus did the original Black sword-and-sorcery hero receive an undeservedly abbreviated early life.

But Night Shade Books has rescued Imaro from used paperback limbo-and these reprinted and revised volumes have finally given Imaro the chance to make a real impression on legions of readers who haven’t had the opportunity to encounter Saunders’s fierce Ilyassai warrior or his marvelously realized fantasy version of Africa, Nyumbani. For connoisseurs of classic sword-and-sorcery without excuses, irony, or parody, the new printing of Imaro 2: The Quest for Cush, is a bloody sumptuous feast filled with hunks of juicy, red meat.

The Night Shade edition has not only brought Imaro back to stride the savannahs and entertain readers old and new, it also offers Saunders a chance to re-tool and add to the saga. A new bridging chapter included in Imaro, explaining how the hero lost both his love Tanisha and his bandit army the haramia, pushed the original concluding chapter to the beginning of the sequel. The revised Imaro 2 now starts with our hero alone, pursuing Tanisha and her kidnapper into the jungle. It is surprising that Saunders didn’t originally realize how more organic this opening feels and how it benefits the rest of the book. Imaro now starts as a fully-formed, independent warrior, and the rest of the episodic novel follows his development as he encounters love, companionship, city life, and the piecemeal unveiling of his role in the battle between white and black magic.

Imaro 2 is superior to the first novel not only in its more cohesive feel, but also its variety. With Imaro’s youthful origin out of the way, Saunders can launch his hero across the polyglot breadth of Nyumbani: swamps, jungles, seas, cities. The urban setting of much of story establishes a different tone, as does Imaro’s new partner, the cerebral and quick-tongued Pomphis, whose own quest in service of the monarch of Cush ties in with Imaro’s struggle against the magic of the Mashataan that has plagued him since is youth. Gladiatorial combats, Asian martial artists, killer fish-people, enslaved men made of half-stone, monsters in bogs, magically enthralled villages, and degenerate sorcerers by the half dozen… Saunders has a caravan full of excitements to offer.

The newly-relocated opening has the most standard sword-and-sorcery elements of the saga. Imaro is often facilely equated to Conan and Tarzan, but in this adventure the comparison feels apt: a hero traversing a jungle (and who immediately kills a murderous panther) searches for his kidnapped women, and then finds his way to a lost city filled with sorcerers of a moribund race who plan to sacrifice his love to prolong their lives. With the help of a clever trickster, our hero fights to save the damsel in distress. Plus there’s a statue that comes to life. It’s a Robert E. Howard and Edgar Rich Burroughs head-on collision! 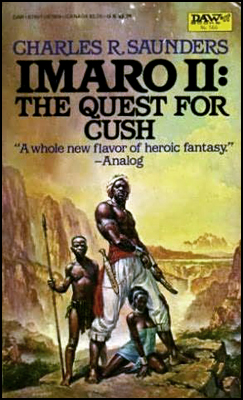 It isn’t the most original opening for a sword-and-sorcery novel, but it works regardless, partially because of Saunders’ masterful pacing and scene-setting, and partially the way the author addresses the years of racism endemic in early fantasy and adventure stories with a villainous white culture, the Mizungus. The Mizungus call themselves Atlanteans, and Saunders hints about a Greco-Roman inspiration. The Mizungus view the people of Nyumbani as nothing more than beasts fit for slave labor, and their derogatory name for Blacks, na-gah, has an ugly but purposeful contemporary resonance. This time, it’s their racist way of life that is dying out, and a Black hero has come to bolt down the sarcophagus lid. Saunders’ polemics appear obvious, but they do not interfere with the excitement of the tale and add an intriguing slant to familiar material.

At the conclusion of the first section, Saunders has gathered together the central cast — Imaro, his luscious and stalwart lover Tanisha, and Pomphis of the Bambuti pygmy race — and the quest of the title begins. The thrills get even better from here on. The long adventure brings Imaro into a city for the first time, then in contact with another bizarre hidden civilization, followed by a deadly sea voyage, and at last entry into the greatest kingdom in Nyumbani to learn more about his destiny in the war to maintain chephet, the balance between light and dark magic.

The only misstep that Saunders makes is in Chapter III, “Bana Gui,” which feels disconnected from the greater story arc. The repetition of ideas with its ‘cursed lost civilization’ draws unfortunate attention to itself, and the action resolves itself too quickly. Following immediately after the long urban adventure of Chapter II, “Mwenni,” which contains some of the best work in Imaro’s saga, “Bana Gui” comes as a mild disappointment.

Unfortunately, some of the printing flaws evident in Night Shade’s Imaro continue in Imaro 2; the typesetting and proofreading errors are fewer, but one of them unfortunately appears in a chapter title. Chapter I is titled “Mji ya Wzimu,” even though the text and Saunders’s introduction make it clear the title should be “Mji ya Wazimu.” That’s the small price we pay for the small presses, alas. But it’s chuffin’ awesome to have Imaro back, and it makes me feel great to be a sword-and-sorcery fan.

(On a personal note, a quote attributed to me on the front piece of Imaro 2: The Quest for Cush comes from an article I wrote with contributions from a few other authors. The specific quote used in praise of Imaro was written by Black Gate‘s own esteemed Howard A. Jones, not me. Night Shade Books couldn’t have known this, but I have to give credit where credit is due.)

Ryan Harvey is the Managing Editor of Sword and Sorcery. He has lived most of his life in Los Angeles, although he attended Carleton College in Minnesota where he studied Medieval History, Classical Islam, and Film. He considers himself a full-fledged writer, with three completed novels, but has supplemented his income at various times as a speed reading instructor, reading development teacher, and magazine copyeditor. When not absorbing mounds of science fiction and fantasy literature and indulging in pulp, he swing dances wearing bizarre 1930s clothing. He also maintains his own website: The Realm of Ryan.

3 thoughts on “Fiction Review: Imaro 2: The Quest For Cush by Charles Saunders”